The Lively Rabbit in Chinese Culture, History, and Mythology

20 Chinese rabbits facts, for those curious about the lively mascot of the new lunar year.

If we could see him, he’s probably already tapping his foot in impatience.

Yup! The new Year of the Rabbit 2023 is just hours away. With that, you bet Mr. Rabbit is all ready to take over as everybody’s favourite superstar of the year.

But for the moment, he would have to wait a little longer—Mr. Tiger isn’t quite ready to retire, yet. For us, let’s also first take a look at depictions of the rabbit in Chinese culture, history, and mythology.

Unlike, say, the horse, the rabbit doesn’t frequently appear in Chinese folklore. On the other hand, its most prominent mention completely defined its persona in Chinese mythology.

The rabbit is also the only other Chinese Zodiac animal outside of the dragon that’s directly associated with a major Chinese festival. That festival is, of course, the Mid-Autumn Festival.

If You’re Born in a Year of the Rabbit …

Previous Years of the Rabbit include 1927, 1939, 1951, 1963, 1975, 1987, 1999, and 2011. If you’re born in any of these years, you are likely calm and personable to all. You could also be witty, inventive, and energetic. On the flip side, and just like the animal, you might be a little too timid or conservative for your own good. Take note too that Chinese astrology differentiates between rabbits of different elements. A slushy, watery rabbit is thus different in personality from a steely, metallic one.

20 Rabbit Facts to Welcome Year of the Rabbit 2023 With

1. The Chinese character for the rabbit is Tù (兔). In Chinese culture, the Leporidae is also represented by the fourth Heavenly Stem of Mǎo (卯), which has the same meaning as Mào (茂), i.e., luxuriant. Under the traditional Chinese time-keeping system, Mǎo furthermore denotes the two hours from 5 am to 7 am, and the second lunisolar month that runs from early March to early April.

2. The Chinese lunisolar calendar uses a cycle of 60 years, and so there are five rabbit years within each cycle. These adorable bunny years are, in turn, differentiated by elemental associations. For example, 2023 is a year of the water rabbit. The previous year of the rabbit in 2011 was a metal rabbit year. (Note too that some countries that uses the Chinese Zodiac system doesn’t include … the Rabbit. For example, 2023 will be a Year of the Cat in Vietnam)

3. According to this research by Long et al, rabbits have been domesticated in China for around 1400 years. (That means it started around the early Tang Dynasty) The same research states that there are “approximately 20 indigenous and recently imported rabbit breeds” in modernChina. Two better-known Chinese rabbit breeds are the Sichuan White and Fujian Yellow.

4. You probably already know. The most famous appearance of the rabbit in Chinese mythology is that of the Jade Rabbit, or Yùtù (玉兔). In the Legend of Chang’e, the beauty literally did a “Fly Me to the Moon” after ingesting her husband’s elixir of immortality. Stranded in the lunar palace thereafter, her only companions are then the Jade Rabbit and a woodcutter named Wú Gāng (吴刚).

5. Interestingly, there’s no explanation in classic Chinese mythology as to how a “Jade Rabbit” ended up in the lunar palace. (The Internet is full of all sorts of stories, though) However, in one of his works, the Warring States Era poet Qū Yuán (屈原) contemplated the possibility of the Moon holding a rabbit in its fold. The Jin Dynasty philosopher Fù Xuán (傅玄) also mused about a rabbit preparing medicine on the Moon.

6. The Tang Dynasty poet Liǔ Zōngyuán (柳宗元) offered a straightforward explanation as to why the Chinese associate the Moon with a rabbit. Hereby, I’ll just share the final verse of his conclusion—Wéishén Shìlèi (唯神是类). To Liu, humans stared at the full moon, with its dark depressions and craters and all, and imagined themselves seeing a rabbit pounding medicine in a mortar. (Liu personally felt there was no resemblance) Notably, China was hardly the only civilization that “noticed” this image. The concept of a moon rabbit exists in Aztec mythology too.

7. I should mention this folktale, even though it’s Buddhist, i.e., Indian in origin. According to Tale 316 of the Jataka Tales, a monkey, an otter, a jackal, and a hare collected food to be consumed after a fast. When a Brahmin asked them to share their food, the monkey gave the mangoes it gathered, the otter offered the seven fish it caught, while the jackal surrendered a lizard and curds it stole from a hut. The hare, however, had only grass, and so it sacrificed itself by leaping into a bonfire. That didn’t kill the hare, though, as the old man was none other than Śakra, the Buddhist equivalent of Indra. Deeply moved and impressed, Śakra drew the image of the hare on the Moon for all to see. This story possibly influenced Chinese perceptions of a rabbit living on the moon. (Some online resources inaccurately cited this tale as the origin story of the Jade Rabbit)

8. Regardless of origin, the Jade Rabbit myth is today widely embraced by Chinese communities and pop culture. In the Chinese language, a “polite mention” for rabbits is Gǎoyào (搞药), which means preparing/stirring medicine. In the Wuxia saga The Handsome Siblings, Gaoyao was a minor antagonist.

9. Think the rabbit is meek and weak? You wouldn’t if you’ve read Journey to the West. In one chapter, the Jade Rabbit was slapped by Sù é (素娥), a fairy of the lunar palace. After Su e reincarnated as the princess of an Indian kingdom, the Jade Rabbit sneaked into the palace, imprisoned the princess i.e. Su e, and masqueraded as her. Later the Jade Rabbit also attempted to absorb the yang essence of Tang Sanzang. Though quickly thwarted by Sun Wukong, the Jade Rabbit was able to “hold her ground” against the Monkey King for a while, thanks to her shapeshifting abilities and the magical pestle she wielded as a weapon. She was ultimately recaptured by Tàiyīn Xīngjūn (太阴星君) and Chang’e, the former being the Taoist God of the Moon.

10. Is there a God of Rabbits in Chinese mythology and folklore? There is, but “he” isn’t a patron of rabbits, he’s a patron of gay men. (Yup, Chinese society was more tolerant of diversity than one would expect) The Qing Dynasty compendium Zi Bù Yǔ (子不语) by Yuánméi (袁枚) mentioned the story of a Hokkien man named Hú Tiānbǎo (胡天保), who was executed after caught … … spying on an imperial officer in the toilet. In the netherworld, however, he was appointed as the Tùer Shén (兔儿神), the patron and guardian of homosexual men. Of note, homosexual relations between “sworn brothers” were said to be common in some parts of Fujian Province during those times, and the worship of Tuer Shen is believed to be popular among this demographic. A 2009 Zhejiang social science journal also claimed that male homosexuality was prevalent in Fujian during the Qing Dynasty Qianlong Era. One speculated reason was the much higher percentage of males in that province.

11. With reference to “Fact 10,” some modern writers wonder whether Yuanmei made up the story about Tuer Shen; the writer could have simply been expressing his sympathy for the executed Hu. Anyhow, there’s a Rabbit God Temple in Taiwan today. Google maps coordinates here!

12. There are several Chinese idioms, or Chéngyǔ (成语), with the character for rabbit. However, most aren’t regularly used. The most well-known is probably Shǒuzhū Dàitù (守株待兔). The story goes that a farmer witnessed a rabbit killing itself after dashing into a tree. From that day onwards, the farmer stopped cultivating crops and merely sat beside the same tree—he thought he could have free meat every day without needing to work. The idiom is thus a criticism of lazybones who dream of windfalls.

13. I (only just) learned this one at Dahlia Dreams 2023, Gardens by the Bay. Jiǎotù Sānkū (狡兔三窟). The “Cunning Rabbit has Three Burrows.” It means never putting all your eggs in one basket. In Chinese culture, the rabbit has long been associated with wit. Before the strategist Fàn Lí (范蠡) vanished from the State of Yue, he lamented about Jiǎotù Sǐ, Zǒugǒu Pēng (狡兔死、走狗烹). The phrase means “now that the cunning rabbit is dead, the hunting dog will be cooked.” Fan was forecasting how the King of Yue would move against him after the vanquishing of the enemy state of Wu, i.e., the metaphorical cunning rabbit.

14. Watch enough Chinese TV and you would surely encounter the nasty insult Tùzǎizi (兔崽子). The characters refer to a kit, i.e., a young rabbit. In the Chinese language, though, tùzǎizi is a derogatory term that more or less means “gigolo.” It also refers to what the Cantonese would describe as “eating soft rice.”

15. Have you ever, erm, eaten rabbit meat? Well, the traditional Belgian dish Lapin á la Kriek is made from lean rabbit meat and I nearly … … Never mind. Here’s what you probably don’t know too. The world’s largest market for rabbit meat is China; the country alone accounts for over 40 per cent of the global market. In turn, Sichuan province accounts for more than half of the Chinese domestic market and yes, there are different Mala rabbit dishes. Lastly, and without surprise, Chinese rabbit farms aren’t exactly renowned for their humane practices. If you’re a fan of the fluffy ones, please be mentally prepared before watching any documentary about such farms.

16. The Ballad of Mulan has a certain extended phrase that uses rabbit imagery. When translated, it means—“a male rabbit hops and leaps while a female one sits still. But when two rabbits scurry by in times of danger, who can tell the male from the female?” The phrase was Mulan’s response after her comrades expressed shock upon discovering her gender. (Such a polite response for dudes who had to be absolutely moronic, or blind …)

17. The ancient Chinese used to believe rabbits were androgynous. Some sources even claim that the name Tù (兔) came from the character Tǔ (吐), i.e., to vomit—the ancient Chinese believe rabbits became pregnant by staring at the moon. As absurd as this sounds, know that it could be tough to tell the gender of a bunny. Historically, this “difficulty” could have resulted in the latter association with homosexuality.

18. Rabbits made a brief appearance in Investiture of the Gods. In short, the wise Wenwang vomited three white rabbits after being brutally fed the meat of his eldest son by the wicked Di Xin. The rabbits were the “three souls” of Wenwang’s deceased son.

19. Returning to the present, Yutu is the name for a series of lunar rovers deployed by the People’s Republic of China (PRC). The rovers were part of the Chang’e missions. These lunar exploration missions couldn’t have been more appropriately named, as far as Chinese culture is concerned.

20. Lastly, a certain Chinese political animated series likened the PRC to peaceful rabbits/hares, while rival countries such as the USA and Japan are depicted as aggressive or derogatory animals. On this, well, it’s quite clear that as far as Chinese culture and mythology are concerned, rabbits aren’t exactly docile or straightforward, are they? I’ve linked the animation above but I strongly advise you to think thrice before watching.

Happy Year of the Rabbit 2023 everyone!

My Mythology Articles and Lists 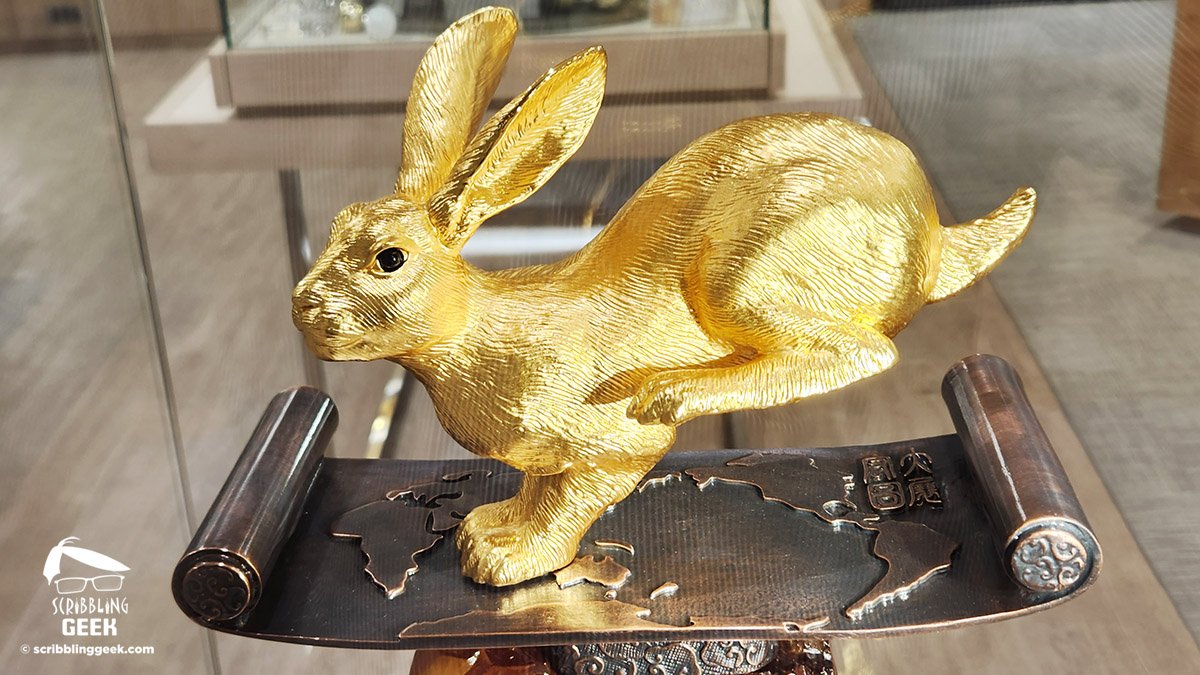