A New Portable Electone! The ELA-1 | The Scribbling Geek

Yamaha has announced a new Electone model! The ELA-1!

This totally caught me by surprise. In fact, I wouldn’t have known about it had it not been for friends at the Facebook Electone World group.

On Sep 1, the Yamaha_Global YouTube channel released four videos introducing the ELA-1, a new portable, compact body Electone that “you can enjoy anywhere.” Described as “Move as you feel, Play as you are” in the video titles, my immediate impression is that this upcoming model is an upgraded version of the ELC-02, one with a whole new array of sounds and effects.

What’s interesting, and highly unusual, are also the following:

Long story short, is the ELA-1 in truth, not the first in a new generation of Electones, but a regional, portable model for the PRC Chinese market?

Going through the Chinese specifications published on yamaha.com.cn, I suspect it is. For a start, this upcoming portable Electone actually features lesser voices than the ELS-02C or ELC-02. It also has fewer preset rhythm patterns, if I’ve read the specs list correctly.

There also looks to be an emphasis on usability in Chinese, with a slight expansion of Chinese ethnic sounds. I guess, pipa, guzheng, and so on.

The above said, the ELA-1 still comes with several new functions, the most attractive to me is the ability to expand sound and rhythm selections with voice packs. Such functions have long been available for Yamaha’s arranger and portable keyboards.

I’d put it this way. Whether the ELA-1 is a regional model, or not, I think Electone players worldwide can look forward to a lot of new, exciting capabilities in future models. Probably, much better mobility too.

The following is a more detailed look at the ELA-1 features and specifications published on yamaha.com.cn, as well as my comments. Before I begin, please note that I’m doing translation here. While I’m not entirely unfamiliar with mainland Chinese versions of Electone terms, I could be wrong here and there.

* Also known as styles in the world of Yamaha arranger keyboards such as the PSR and Tyros series.

I have never even touched a ELC-02 before, so I can’t comment much on this.

But going by the videos, I think this means the ELA-1 doesn’t need lumpy monitors affixed; it has inbuilt speakers, the likes of the PSR keyboards.

On this, many musicians I’ve communicated with over the years aren’t enthusiastic about inbuilt speakers. Frankly, I tend to agree with their criticism.

But oh well, we don’t know about the quality of the ones in the ELA-1. For players who need portability, I suppose this would be a much-appreciated modification too.

If you want to make something portable, you might as well go all the way.

This reduction in voices from the ELS-02C’s 986 seems a step back, and was what convinced me that the ELA-1 is a regional release, not a new generation model.

Although I personally do not see the need for more voices on the Electone, I’d be very surprised, really surprised, if Yamaha does not move into the thousand range for next-generation models.

I bet these are the Chinese names for the Sweet!, Cool!, and Live! voices from the PSR keyboards.

Is the ELA-1 therefore also an Electone version of the PSR keyboards?

These sound really exciting, do they not? Though we all prefer to program our own user rhythms, having more “samples” to refer and copy from to never hurt.

However, I think all that fanciful descriptions about professional and concert rhythms just refer to what is known on the PSR portable keyboards as Pro and Live styles/rhythms. On the ELS-02C and so on, the latter are the annoying rhythm presets marked with a +, those that you can’t edit or copy from.

“DJ Rhythms” sound like something new, though.  Could this be similar to the Multi-Pad functions of the PSR keyboards, in which you can tap dedicated buttons for drum beats and effects? (In other words, far more convenient to use than the Keyboard Percussion function)

“Free-style rhythm,” no idea what this is. But it possibly refers to a user rhythm slot.

Since I’ve long figured out how to record from my ELS-02C, and other models, the Rec’n’Share compatibility doesn’t excite me. Sorry to say this.

The possibility of voice and rhythm expansion, now, that’s quite a different business. As mentioned in my introduction, something I’ve long wished for too.

It’s a capability long available for the Genos, the Tyros range, and even older PSR keyboards. Hey, even the HS models in the 80s had such sound packs. So why was it never considered for the Stagea models?

I could … come up with a few reasons, but I wouldn’t go into those. I’d just say the ability to expand voice and rhythm selection is not a must-have for new Electones but certainly something that’s very attractive and exciting. It greatly appeals to me.

To me, this is a must-have for any new Electone model. A MUST-HAVE.

It’s a technical requirement, I think, for the expansion capability mentioned above. But beyond that, it minimises a technical nuisance of the second generation Stageas. USB port errors.

Though the ports on my ELS-02C have not failed, they are increasingly giving me issues. I had data damaged, lost, etc. The ports are also not compatible with newer USB drives and worst of all, I sometimes need to re-insert my drive multiple times for it to be properly read.

Having internal storage wouldn’t completely resolve these issues, I’m aware, but at least it would minimise reliance on USB ports. Hopefully, that makes them last longer.

Sound effects on the ELA-1 don’t seem to operate the same way as they do on the Stageas. Our usual categories of Chorus, Delay, Panning, EQ, etc, are not even on the specifications list.

You know what this categorization reminds me of?

There’s one more notable thing on the full specifications list, one that truly baffles me. The list states that there is NO Aftertouch for the upper and lower keyboards. I simply cannot believe this and I will assume that there is some sort of typo.

The keyboards are also described as “FSA” type. I have no idea what this means, since it’s an area Yamaha never properly explained. (The ELS-02C has “FSV,” while the ELC-02 is “FS” and the ELB-02 is “FSB”)

To end, I dropped by Yamaha’s outlet at Plaza Singapura yesterday to inquire about the ELA-1. The staff informed me that they have yet to receive any news. Even if the model is to be released in Singapore, it would likely be six to nine months later.

Going through the Chinese specs list again, it really seems the case that the ELA-1 is an improved portable Stagea, rather than the first model of a new generation of Electones. Speaking of which, notice how the name “Stagea” is not seen or mentioned in the videos.

The various functions/capabilities I’ve mentioned clearly indicate a marked move towards PSR/Tyros/Genos design too. In fact, I think some aspects of this new model is closer to a PSR keyboard than an Electone. I think I wouldn’t be too wrong too to say the ELA-1 is a sort of Genos/PSR designed the Electone way.

With my ELS-02C still functioning, I don’t have any real reason to want this new model; it doesn’t seem like a newer generation model, yet. I say “yet” because information is still lacking at the moment.

But perhaps there are surprises down the road? I look forward to any. 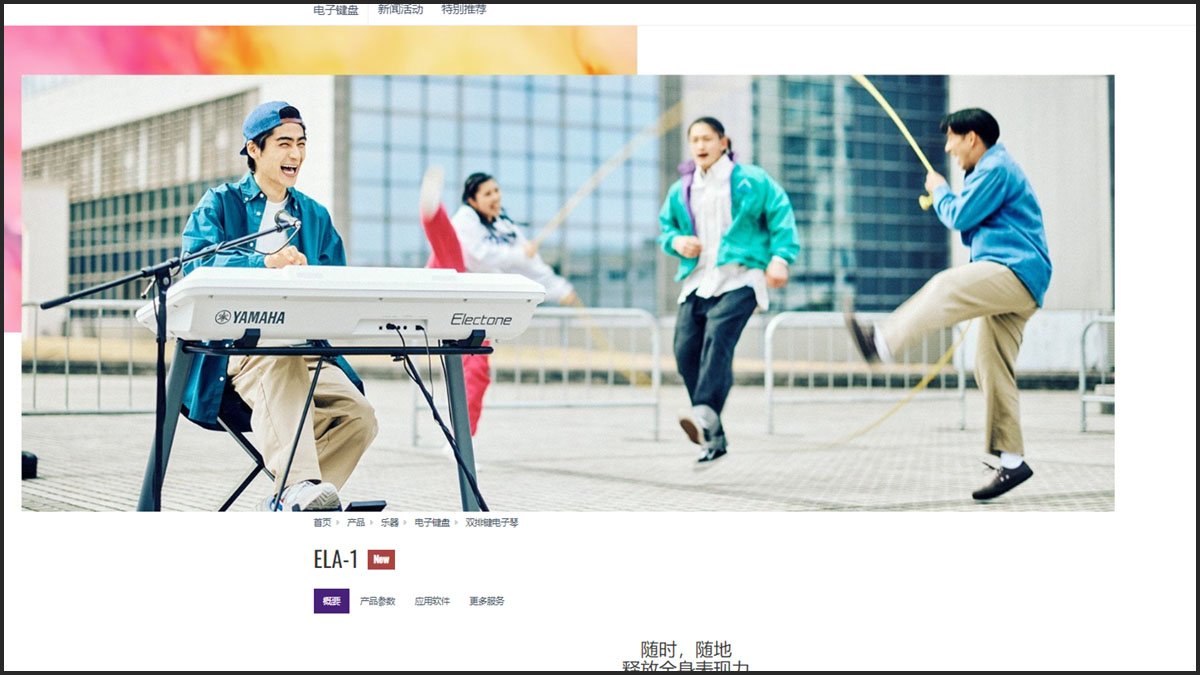 Article Name
A New Portable Electone! The ELA-1 | The Scribbling Geek
Description
There is a new Electone model! But rather than the first in a new generation, the ELA-1 is probably a regional model for the mainland China market.
Author
The Scribbling Geek
Share
Facebook
Twitter
Pinterest
WhatsApp
Linkedin
ReddIt
Email
Previous articleLights by the Lake 2022 at Jurong Lake Gardens
Next articleMovie Review – Three Thousand Years of Longing