For a few years, whenever I’m in the Bugis district, I’d stare with curiosity at a certain aged structure One that’s right opposite the ultramodern National Library and with grounds surrounded by hoardings.

The building is clearly a church, but for the life of me, I can’t remember the name or anything else about it, not till checking Google Maps anyway.

For some reason, I kept assuming the building is some sort of missionary school too. (Which part of it was; see next section)

Well, that landmark is Saint Joseph Church, one of Singapore’s oldest Roman Catholic churches with over a century of history. Build in the ornate Portuguese late Gothic style, the church is also a Singapore National Monument and has been under restoration since 2017.

Those works recently ended and on June 30, 2022, the church reopened its grounds and doors to the public. When I passed by the restored monument last Monday, the majestic spires under the blue evening sky immediately caught my attention. I stood for ten minutes in the car park taking shot after shot, which making a reminder to myself that I should return for a proper “exploration.”

That exploration happened two afternoons ago. In a nutshell, my half-hour stay in the tranquil and airy nave was both spiritual and fascinating. The abundant Catholic art on display also inspired me to dig out all my old reference books about saints, the moment I’m home.

The peaceful ambience everywhere was also, how should I put it, incredibly healing and restorative.

The current restored Saint Joseph Church was built between 1906 and 1912, and was part of the Portuguese Mission till 1999. For a long time, it was also informally known as the “Eurasian Church” as the congregation included Portuguese and Malaccan Eurasian Catholics in earlier days.

Before 1906, however, a smaller church long stood on the grounds. In the later part of the 19th century and all the way up to the mid-1990s, a school (Saint Anthony’s Boys’ & Girls’ School/) was also situated in the church compound. The repurposed school building is now the National Design Centre.

Architecture-wise, the main building of the church presents a classic Latin Cross, with the western front, i.e., the main entrance capped by three towers. Originally painted in white and blue, probably to reflect its Portuguese roots, the restored church is now in calming beige with bluish grey details. For all visitors, secular or religious, the church’s magnificent stained glass windows are the main attraction too.

Here’s a much more detailed introduction of the church’s history by Fr. Joe Lopez Carpio, the current rector.

The following might sound sacrilegious to some, so I apologize! I had a great time going through the saints and trying to identify them all without reading the names. Sadly, though, I’ve forgotten most of what I’ve read over the years and so other than the obvious ones like Saint Sebastian, I couldn’t name many. 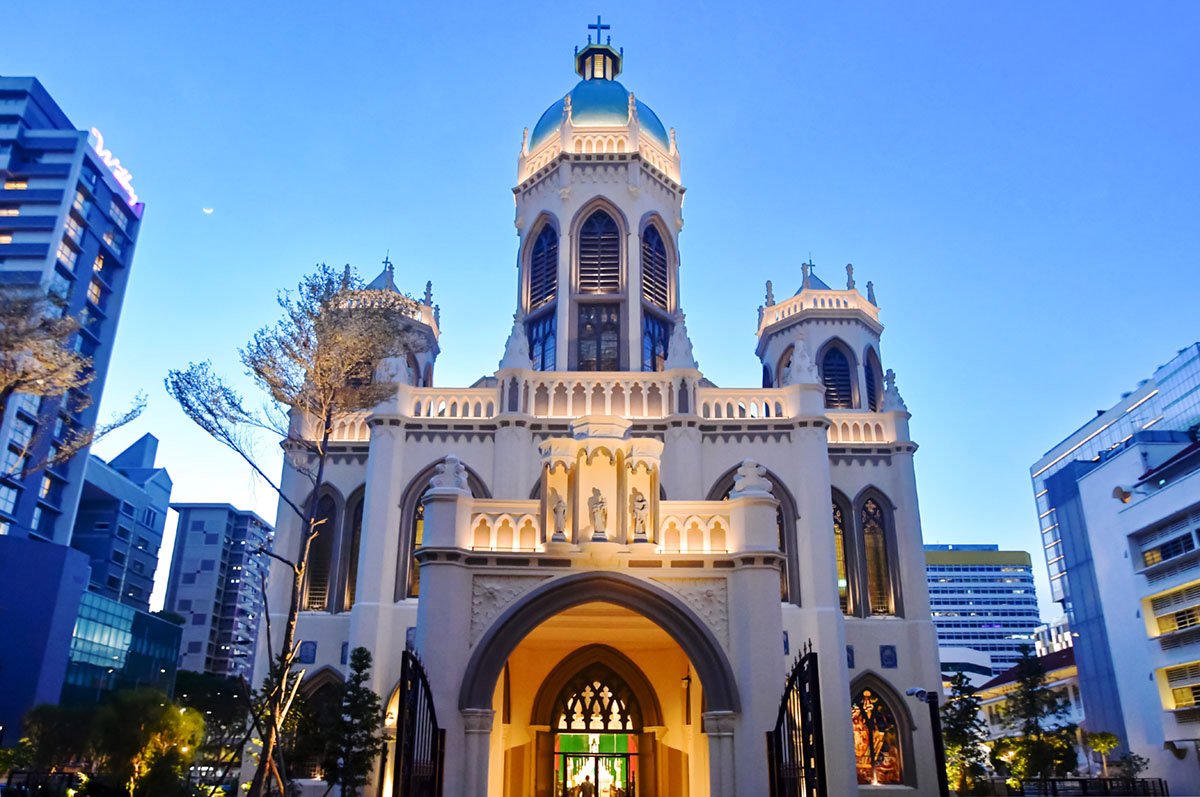