The Most Magnificent Guanyin Temples in Singapore | SG Temples

The most beautiful and magnificent Guanyin temples in Singapore.

Which is the most popular Buddhist temple in Singapore?

If you’ve been here any length of time, I’m sure you’d immediately say it’s the Kwan Im Thong Hood Cho Temple at Waterloo Street. And that’d be the correct answer. Evident in recent months by how changes to social distancing at the temple are always promptly announced on national news.

On the other hand, when it comes to visual magnificence or architectural merit, the popular Waterloo Street temple does not rank high. The spacious worship hall is undoubtedly grand, but elsewhere in Singapore are several Guanyin temples more renowned for their splendour.

Many of these larger temples/monasteries display the “Thousand Armed, Thousand Eye” avatar of Guanyin. Known in Chinese as Qianshou Qianyan Guanshiyin Pusa (千手千眼观世音菩萨), these intricate sculptures easily count among the most magnificent religious sculptures in the country, and are absolutely wondrous to behold.

The following is my quick list of where these must-see temples and Guanyin sculptures are.

Part of the sprawling Lianshan Shuanglin Monastery complex, Guanyin Dian is the place to head to if you’re keen on examining the artistic details of a Thousand Armed Guanyin statue.

Because few others in Singapore are as detailed. Or as large. Or as masterfully crafted.

Housed in an airy hall that is itself adorned with thousands of copper Guanyins, the main statue here rises 11.2 metres tall and is especially eye-catching because of its bronze exterior. The superb natural and placed lighting of the hall also ensures that the Bodhisattva is always illuminated with an almost ethereal sheen. A glow that varies as you approach the altar.

Best of all, if you’re into Buddhist art and architecture, there are many other masterpieces to enjoy on the grounds. Right outside Guanyin Dian is the famous (Toa Payoh) Dragon Light Pagoda. The main monastery complex next door is also full of dignified, golden Buddhist saviours.

The Heavenly Kings at the main monastery entrance are especially striking. Just don’t be too intimidated by their fearsome stares and otherworldly weapons when passing through.

Phor Kark See, or Pujue Si in Mandarin, has a special place in my heart. Not just because my grandpa’s ashes are here, but also because this was the first temple complex that I explored on my own as a teen.

Till today, I’ve also never seen another Guanyin statue quite the same as the one here.

Occupying center stage in a majestic hall facing Bishan Park, the Thousand Armed Guanyin here is truly one that integrates the best of different worlds, beginning with how it is Indian in design but crafted by Italians. The gleaming white surface also suggests a Burmese touch, but look twice and there appears to be European influences.

Most interestingly, this is the most masculine, or should I say most androgynous, Guanyin statue that I’ve ever seen in Singapore. The gender of the Bodhisattva has always varied, depending on where you are, but the short of it is that most Singaporean Guanyin temples tend to depict the saviour as female.

Not the one here.

Is this a gentle reminder that salvation can come in different forms?

If you’re visiting, this is a question that will come to mind because Phor Kark See has another soaring Guanyin statue on its grounds. Surrounded by whimsical arhats and crafted in traditional Chinese style, this outdoor one is worlds apart from the thousand-armed one, to say the least. You might even be led into thinking the robed version is a separate guardian.

Notice: Dabei Dian, the hall housing the Thousand Armed Guanyin, is currently undergoing renovations. The restoration works are expected to be completed around November 2022.

Many Names, Many Identities

An interlude. In Sanskrit, Guanyin is known as Avalokiteshvara and is the embodiment of compassion. Described as having 108 avatars, Avalokiteshvara also goes by different names throughout Asia. For example, the Bodhisattva is referred to as Chenrezig in Tibet. In Nepal, he is Seto Machindranath.

In Singapore, the “Chinese Goddess of Mercy” is sometimes called Kwan Yin, or Kwam Im too.

Of late, the Sanskrit name is also increasingly used in Singapore; for example, by Phor Kark See’s website. Lastly, the Chinese name means “perceiver of sound” and is a translation from Sanskrit. Without going into all the etymological history involved, “sound” here refers to the world. The great Bodhisattva constantly observes the world to identify those in need of help.

If you like the “bronze approach” of Guanyin Dian, Foo Hai Ch’an Monastery at Geylang East is the temple to head to next.

An architectural gem extensively restored in 1999, the standing thousand-armed Guanyin statue here is slightly shorter at 9.9 metres, but more solemn and dignified in posture. Before the Bodhisattva is also a delicately sculptured 3.3 metres seated bronze statue of Gautama Buddha, with Guanyin’s gaze subtly inviting you to examine the Buddha’s serene visage.

To me, entering this citadel is like stepping into a Zen paradise. With the calming aura of both saviours all about you. And with “Zen,” part of the monastery’s name.

On another note, Foo Hai Ch’an Monastery has a noteworthy address. It is sandwiched between the palatial Sri Sivan Temple and a small HDB estate. Just steps away from the housing blocks are also the, erm, colorful establishments of Geylang Road.

Any Singaporean would know what Geylang Road is famous for, yes? (Sorry to be blunt)

Does this location reflect the great Avalokiteshvara vow to save all children of the world, no matter whom and at when?

Here’s an unexpected gem that I discovered years ago after visiting a client’s office at Leng Kee Road.

Nestled between glitzy car showrooms, this compact Guanyin temple opposite Dawson Place houses quite a surprise on the upper floor. And I’m not just referring to the ornate golden main statue.

Under the ornate emerald-green are also hundreds of white ceramic Buddha figures; perhaps over a thousand. According to this research paper that I found, the figurines were donated by devotees.

With the main hall’s unusual location on an upper floor, one reached by rather steep steps, there’s also a sensation of … ascending to another realm when visiting? Of ascending another floor in a spire of spiritual enlightenment?

It’s an impression that’s especially pronounced when there’s no one else in the hall.

A Thousand Ways of Compassion

Another interlude. As a kid, I thought the Qianshou Guanyin is a war deity avatar of the Goddess of Mercy.

I mean, one thousand arms! Each with an eye! One thousand death rays!!!! Demons would be disintegrated in half a sec.

But nope, that’s not the “reason” at all. The many arms, with their eyes, represent the unending determination of Guanyin to observe the world, so as to find those in need. Some texts/traditions also view the arms as a metaphor for the Bodhisattva’s burning wish to help the masses.

Notably, some sculptures also depict Guanyin as only having 42 arms. For these simplified forms, eyes appear on 40 of the arms, i.e, those wielding dharma icons at the side.

The “calculation” goes as follows. Each of these 40 arms represents 25 arms/eyes. Multiply that and you get a thousand.

Years ago, I’ve also read that the arms/eyes each represent one method of salvation.

Instead, I’d share that it took over ten years for me to realise the meditative Bodhisattva in the rear hall is an avatar of Guanyin. (Somehow, the Sanskrit scripts on the wall led me to think she’s Tara) One of the six forms of Guanyin, Cintāmaṇicakra, or Ruyilun Guanyin (如意轮观音) in Chinese, offers salvation for devas. Yes, in the Buddhist universe, even heavenly beings are in need of salvation.

We earthly beings might not be of the lofty realms. But one look and you’d surely agree this is one of the most exquisite, most elegant Buddhist statues in Singapore. If not the whole of Southeast Asia.

And apart from Cintāmaṇicakra, there are several other Guanyin statues displayed in the museum on the upper floors. Other than their obvious artistic merits, these reflect the popularity of Guanyin over the centuries; the Bodhisattva is reimagined in so many forms.

Some of my late relatives are enshrined at Tai Pei Yuen, and whenever visiting during the lunar third/seventh months, the dim rear chambers and alleyway always invoke memories of an older Singapore.

Actually, no one can visit at the moment. The temple is closed, not because of COVID-19 but because the main complex is undergoing major rebuilding.

But when it reopens, Tai Pei Yuen will be one of the most dazzling Guanyin temples in Singapore. Just take a look at the above picture of the old worship hall, then compare it with the concept pictures on the temple’s website. Can you see how key fixtures of the old hall will be retained and given new, colourful life? For example, how an artificial hillside would be constructed for the 18 Arhats?

There would even be “3D” murals of the Buddhist 24 Devas. I’ve never seen this group of deities anywhere else in Singapore.

Yup, I’m doing some sort of preamble here. I’ll immediately update this section once the temple is reopened. A date I much anticipate.

I started this listicle with Waterloo Street’s Kwan Im Thong Hood Cho. So let me end at the same street.

To repeat, while hands-down Singapore’s most beloved Guanyin temple, the main altar of Kwan Im Thong Hood Cho doesn’t house a visually striking main statue. At least, not when compared to the other temples on this list.

If that disappoints you for whatever reason, just walk a few steps up Waterloo Street to the Fu Lu Shou Si Mian Fo shrine/religious paraphernalia shop. Not the main one in Fu Lu Shou Complex, but the branch facing Albert Centre Market.

Positively Singapore’s most colourful Buddhist/Taoist/Hindu shrine, there are tens of intricately crafted Buddhist statues here. What’s more, there are different versions of Guanyin too. One of the main altars is dedicated to a magnificent wooden one. The rest are painted and as colourful as they come.

Photographers: As long as you are respectful to devotees, you can have a total field day here. Beginning with how close you can get to the statues.

Non-photographers and Travelers: The entire shrine/shop is akin to a golden Thai palace. I’d go to the extent of saying, no other religious spot in Singapore is quite alike here. Waterloo Street is worth a visit just for this shrine. 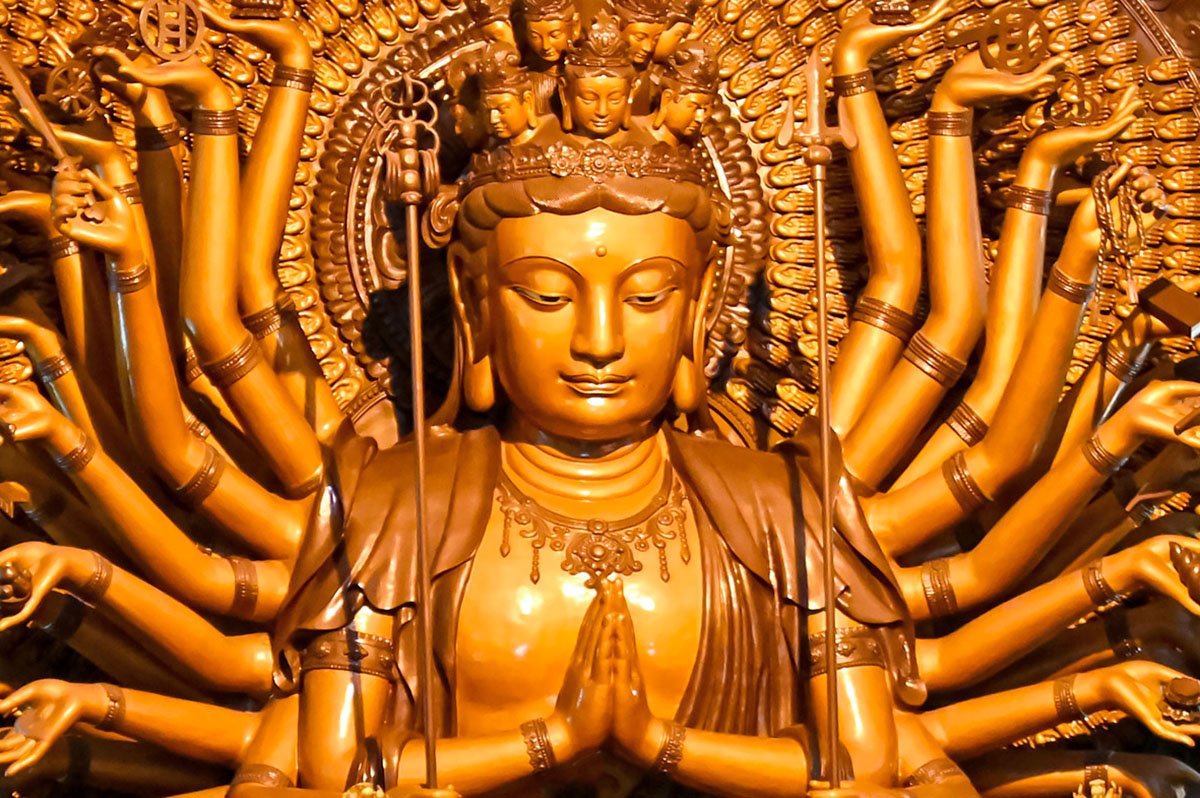