A crash course on the Ramakien at [email protected]

Are you familiar with the Ramakien, or its inspiration, the Ramayana?

If you’re not, the latter is one of the two great Sanskrit epics of Ancient India. (The other being the Mahabharata) Also an Itihasa, or Hindu holy account, the Ramayana narrates the life of the righteous Prince Rama of Ayodhya. From his childhood to his unjust exile, to his epic battle with the demon king Ravana, and finally his triumphant return to his kingdom.

Rama himself is furthermore recognised as the seventh avatar of Vishnu, the great Hindu God of Preservation. His wife in the saga, Sita, is an avatar of Lakshmi, the Consort of Vishnu and the Hindu Goddess of Wealth and Beauty, and Fortune, among other things. By these alone, I’m sure you can tell how important the Ramayana is within the Hindu faith.

And oh, the wonderful Festival of Lights, Diwali/Deepavali. For some traditions, it is a celebration of the day Rama returned to Ayodhya. How the whole kingdom lit up with lamps to welcome him.

Coming to the Ramakien, this greatest of all Thai national epics is based on the Dasaratha Jataka, with the Jataka itself a retelling of the Rama story. (I’m most likely phrasing this wrongly but it’s the most straight-forward way I can say it) Historically, the Ramayana story, as told by the Dasaratha Jataka, reached Southeast Asia via Indian merchants and Buddhist missionaries. After the Thais embraced the saga, they began presenting the story as shadow puppet performances.

Most versions of these plays are now lost, unfortunately. However, several Thai Chakri Dynasty rulers recompiled the epic during the pre-modern centuries. These efforts include the writing of a version for Khon drama.

The versions that currently exist are these ones. Of note, the names of the Chakri Monarchs are also stylized as Rama I, Rama II, and so on. The current Thai Monarch, his Majesty King Vajiralongkorn, is Rama the Tenth.

The Ramakien at [email protected]

To share, I’m very familiar with the story and characters of Ramayana. This, thanks to teenage me religiously watching the 1987 Ramayan Hindi series on SBC Channel 8.

On the other hand, I know next to nothing about the Ramakien, beyond it being culturally important to the Thais, and the Thai Kings styling themselves after the avatar prince.

And that’s there’s a stunning mural gallery inspired by the epic at the world-famous Temple of the Emerald Buddha.

So imagine my surprise, and delight, a few years ago, when I walked into [email protected] for the first time, and saw a whole row of gorgeous Ramakien puppets.

What’s doubly exotic about the puppets is this. Though they occupy prominent space in the library, and are each clearly labelled, there’s absolutely no other reference within the library about them. No formal introduction or the likes of too.

Online checks reveal no details too. Actually, there aren’t even many pictures of them on the Net.

Were they “leftover” from a previous Thai puppet performance at the Esplanade? But a staff told me they have always been there.

Or perhaps they are merely intended as tasteful, artistic décor? [email protected], after all, is a specialised boutique library for the performance arts.

Whatever the origin story, I think they add an air of exotic fantasy to the place! They are most certainly a fantastic introduction to the Ramakien too, and an absolute treat for mythology fans like me.

The Heroes and Demons of the Ramakien

Here are close-ups of the Thai puppets on display! Now, I’m a completionist of sorts, so I’m going to list everything. But if you can, PLEASE do visit the library for a full look. Each puppet deserves to be seen in person.

A quirky side note before I continue. It is always entertaining to see depictions of Ravana in fantasy TV series or movies. How those TEN heads are shown ranges from hilarious to awe-inspiring.

About Nonthuk, this demonic warrior gained incredible power from his fervent worship of Phra Isuan (Shiva). He was even given a diamond finger that could kill anything it points at by the god. A power he soon abuses.

The great god Phra Narai (Vishnu), however, managed to trick Nonthuk into killing himself. Masquerading as a charming dancer, Narai fooled Nonthuk into mimicking his moves, the final of which led Nonthuk into pointing at himself with his deadly finger.

Nonthuk is then reincarnated as Tosakanth, only to be killed “again” by Narai/Vishnu. As I mentioned in my intro, Phra Ram is an avatar of Narai/Vishnu.

[email protected] is open everyday from 11 am to 9 pm. The Thai puppets are to the left of the main entrance. 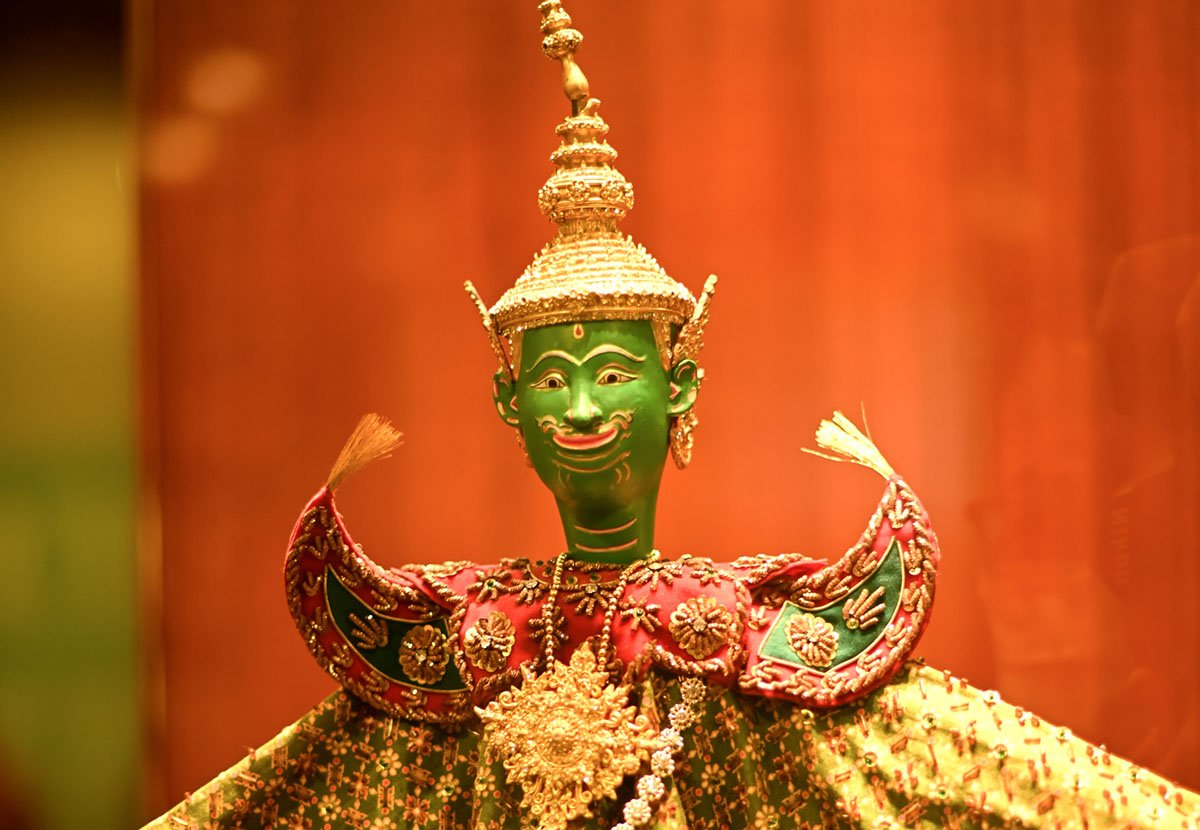