Precious Peony 2022 | Gardens by the Bay

Japanese Sakura season at Gardens by the Bay has ended. With that, it’s back to China and Chinese culture with the first-ever Precious Peony exhibition.

Yup, an inaugural exhibition, so wrote Gardens’ calendar of events a while ago. Also, the first time over 70 Chinese and Peranakan artefacts are included in a Flower Dome floral exhibition. The latter diplays because the peony has long been a cherished symbol of beauty and wealth in Peranakan art.

There’s even an ornate Peranakan shophouse as the centerpiece, as well as replicas of a Chinese study room, medicine hall, a wooden pavilion, and, a five-tier pagoda. Long story short, I visited on Monday evening and the hour I spent in the Flower Dome was alike a mini East Asian architectural tour. A brief tour from China to Southeast Asia.

As for the peonies, they were naturally wonderful to photograph; btw, it’s ages since I’ve last seen actual ones. According to this Straits Times report, logistical difficulties in China, unfortunately, affected the exhibition too, and Gardens was forced to use blooms from elsewhere for the first week.

To be honest, I somewhat sensed this while there, there weren’t that many peony pots. However, the exhibition on the whole still had plenty of beauty to soak in. As expected, there were also other oriental blossoms on display.

Let me start with the blooms. Complex yet elegant, and with a distinctive fluffy appearance, peonies have been beloved by Chinese artists for centuries.

According to some “historical” texts that I’ve read, they also had a most colourful fracas with Wu Zetian. In summary, mu dan (牡丹) were the only flowers that did not bloom in the dead of winter after a decree by the female emperor. Because of this, they were exiled to Luoyang by Wu, where they bloomed naughtily and gloriously.

Stung and furious, Wu ordered all peonies to be burned. (What a … bitch, huh?) The whole of Luoyang was, however, subsequently enthralled by the sight of the gorgeous blossoms amidst the dancing flames. Commoners and aristocrats alike were particularly fascinated by the contrast of vibrant petals against charred stems.

This fascination (supposedly) explains why most Chinese artists paint the branches and leaves of peonies in blackish colours. Coming back to Precious Peony 2022, Chinese paintings showcased in the exhibition all display the same curious characteristic.

For some visitors, I guess these would be bigger attractions than the peony blooms.

And they deserve to be so. Meticulously conceptualised with informative text, these replicas transform the central area of the Flower Dome into an elaborate Southeast Asian Chinese garden. One full of selfie opportunities everywhere. The interior of the shophouse showpiece is furthermore painstakingly decorated to resemble an affluent Peranakan home.

I think it was a great decision to include these artefacts. They add an air of cultural sophistication. For visitors keen to know more about peonies, the displays contain lots of trivia too.

Come to think of it, Gardens by the Bay have been integrating such cultural displays into their Flower Dome floral shows for a while. For example, during last month’s Sakura fest.

I’m keen to see what they have in plan down the road. The Christmas and Mid-Autumn shows would be especially interesting.

My other Singapore events posts. 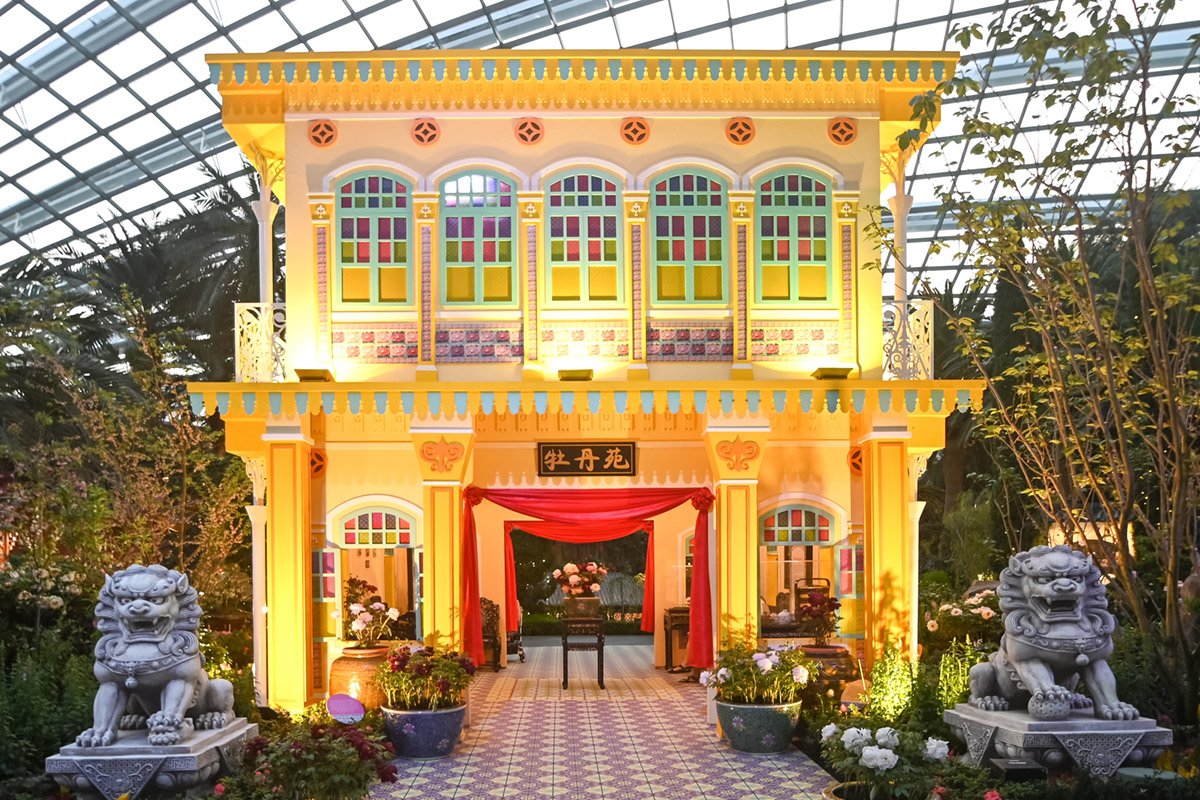