Visiting the permanent exhibition of the Indian Heritage Centre on a Friday evening.

Since starting this blog, I’ve passed by the Indian Heritage Centre at No. 5 Campbell Lane numerous times, but have never gone in since I’m always in the area after dark.

In other words, at Little India after closing time, because I would be there taking Deepavali festive pictures. And each year, I’d gawk at the illuminated façade of the centre and think to myself, man, I really ought to head in someday. After which I entirely forget about it because of Christmas and the usual long list of year-end festive events.

Looking back, it’s such a pity. A real loss for the museum fanboy in me too; I only found out last week that the centre contains a mini-museum on the upper floors.

And the displays are spectacular! The name of the centre suggests a focus on local Indian life and contributions, but an entire floor was dedicated to sub-continental religious art. And I don’t mean just Hinduism art.

There’s even a stunning double-storey ceramic façade from 19th Century Pakistan, and a fantastically ornate wooden Chettinad doorway. I was alone when viewing these. During those moments, I felt as if I’ve been transported to another age and land.

From Ancient Religious Art to Modern Symbols, to Local Leaders

The permanent exhibition of the Indian Heritage Centre, titled Indians in Singapore – Past & Present, starts on the 4th floor and ends on the 3rd, and is divided into five galleries. As for the eye-catching building itself, the ultramodern glass façade was inspired by Indian stepwells. When illuminated at night, the façade is easily the most futuristic structure in the vicinity.

And as esoteric as the permanent exhibition might seem at first glance, it follows a unifying theme. In short, it depicts the historical and cultural links between South Asia and Southeast Asia over two millennia, and how that led to the Indians becoming one of the major races of Singapore.

The exhibition furthermore ends with interactive summaries of Indian contributions to Singapore. There is a wall honouring famous Singaporean Indian pioneers. For local visitors, the wall is kinda a question of, how many of these great leaders do you remember?

To highlight, half of the first gallery showcases religious art from both the Indian Sub-continent and Southeast Asia, and through this, illustrates the cultural exchanges between the two regions in ancient and medieval times. For example, the above Javanese Wayang Kulit puppets feature characters from the Mahabharata, one of the two great Sanskrit epics of India.

Incidentally, there’s a huge Aravan head sculpture at Sri Mariamman Temple too. For many tourists, that sculpture is probably one of the most “exotic” display of Singapore’s oldest Hindu temple.

This gallery starts and ends on the 3rd floor, and highlights the many occupations and community experiences of Indian pioneers during Singapore’s colonial years.

The fourth gallery outlines the social and political awakening of the Sub-continent in the 20th century, with huge busts of India’s most famous nationalistic heroes being the star displays. All were gifted to the Indian Heritage Centre by India to commemorate half a century of diplomatic relations between India and Singapore.

And while the struggles of these larger-than-life characters seem so far away from Singapore, I suppose they influenced the lives of Singaporean South Asian communities in more ways than one. Hey, I didn’t know part of Gandhi’s ashes were scattered into the Singapore River! One of several historical pictures displayed here commemorates this moment.

Making of the Nation: Contributions of Indians in Singapore

The last and the most interactive segment of the permanent exhibition, this final gallery celebrates the national contributions of the Singaporean Indian community. An accompanying mural also honours famous Singaporean Indian pioneers and leaders.

This gallery is informative. For Singaporeans, also a strong reminder of how the Indians have always been an integral pillar of the country.

For me, I think what’s doubly noteworthy is that while this final gallery is relatively small, there is much more to go through compared to the other galleries, because of interactive stations.

As weird as it might sound, I feel this decision gives the permanent exhibition a stronger cosmopolitan appeal. What’s on display is not just a nationalistic celebration of local Indian accomplishments and contributions, but true to the building’s name, an in-depth showcase of Indian heritage and culture.

I’m sure most visitors, especially international ones from the West, will appreciate this sensibility.

How to Get to the Indian Heritage Centre

The centre is about equal distance from Little India and Rocher MRT stations. Whichever station you alight at, the easiest walking route is to walk alongside Bukit Timah Road/Sungei Road till you see the massive Tekka Centre market. After heading up Serangoon Road, Campbell Road is right beside the first traffic crossing. (There’s a huge fruit stall)

If you’re driving, I believe the nearest car park is at Tekka Place.

The Centre is open from Tuesday to Sunday. Opening hours vary, so check the official website before heading over!
Take note that there are free guided tours in English, Tamil, and Mandarin too! English ones are available everyday. 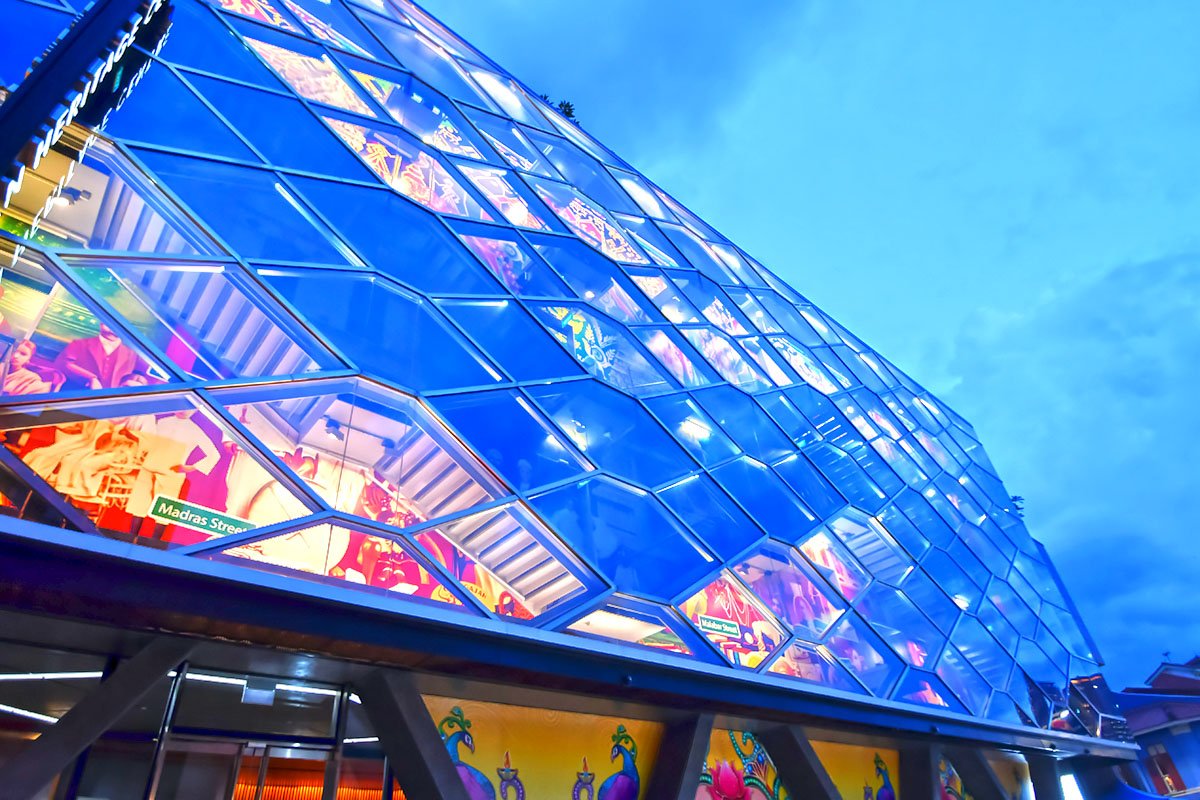