I have quite a lot of pictures to share and comment about. So I’ll keep my introduction short. J

Summary: I headed to the museum right away. I’m delighted to say I not only “encountered” quite a few famous mythological characters from the SMT games in the ACM, I also discovered a few that have yet to make appearances.

Down the road, I’m sure these other legendary creatures would be included in the SMT universe too.

All SMT illustrations belong to Atlus, of course.

A note. The Shin Megami Tensei (and Persona) games refer to all mythological creatures and characters, and gods, as “demons.” The term itself doesn’t correspond to how it’s usually used, but so as not to come across as religiously disrespectful, I’ll use the abandoned SMT term, Nakama.

Nakama (仲間), which means “companion” in Japanese. But within the games, written as 仲魔. The second kanji was changed to that for, err, demon.

I’ll start with this unusual-looking Northern Vietnamese ceramic figure. A water vessel of sorts, the imp-like character is simply named Kneeling Figure and is believed to be a special commission from Java. Looking at that earnest face and those … teeth, don’t you agree he is just perfect for the SMT games? Any fantasy game, for that matter?

In Islam, the Prophet Muhammad flew across the heavens while riding the Buraq, a white half-mule, half donkey steed with wings.

This large carving, found in Mindanao, appears quite different from the way the Buraq was depicted in Soul Hackers. But look closer and I believe you’d see both depictions share the same facial and hair features. Yes?

3 Mythological Creatures That’d Be Perfect for the SMT Games

As mentioned in my introduction, I came across a couple of Asian mythical creatures that have yet to appear in the Shin Megami Tensei games. Some of these would be awesome if reimagined for the series.

These ferocious-looking dragon-dogs are spiritual protectors from Sarawak, and associated with water and fertility. The Dayaks also believe that Aso rule the underworld and are guardians of the dead.

Looking at those … fangs and horns, I assume they are pretty great at their jobs. I’m sure they’d cast great Bufula spells too.

According to the accompanying description, the people of the Mentawai islands hang spirit bird carvings not just for decoration, but also because such birds attract souls. (!) Doing so then keeps the souls of the living and ancestors close to home. It furthermore ensures success in hunting because the souls of animals are attracted.

In the context of the SMT games, I guess Mentawai Spirit Birds would cast Spirit Drain +3.

Just a look and you can tell why these ornate funerary statues are perfect for any SMT game?

According to information online, these Zhenmushou (镇墓兽) are meant to scare away evil spirits, not humans or grave robbers. That means, they’d be great at light magic. It’s Hamaon instant kill all the way for these dudes!

Representatives From the Western World

The Asian Civilisation Museum has a chamber devoted to Christian art. However, most displays here feature Christ or his mom. That is, with the exception of:

I don’t think you need me to tell you who the above dudes are. I’ll just say, it’s a scene that DIDN’T happen in any of the Shin Megami Tensei games!

The above terracotta “head” is huge, and is the showpiece of the chamber it’s in.

At a glance, would you assume it’s Hellenistic in origin? But it’s actually from Gandhara, i.e., modern-day Pakistan and Afghanistan, an area previously conquered by Macedonian warboy Alexander the Great. The statue itself is that of a Buddhist Bodhisattva.

With reference to the Shin Megami Tensei games, remember Maitreya’s weird second form in SMT IV: Apocalypse? Some historians have speculated that the “Future Buddha” was inspired by the Zoroastrian light god Mithra. Zoroastrianism itself was possibly influenced by Hellenic culture after Persia was conquered by Alex.

In other words, SMT IV: Apocalypse wasn’t completely imaginative with its interpretations. The world has long been connected, in more ways than one.

This strange relic is a Linga, and presents the Panchamukha, the five faces/aspects of the great Hindu God Shiva. In short:

The Asian Civilisations Museum is open daily from 10 am to 7 pm. On Fridays, the hours are 10 am to 9 pm. 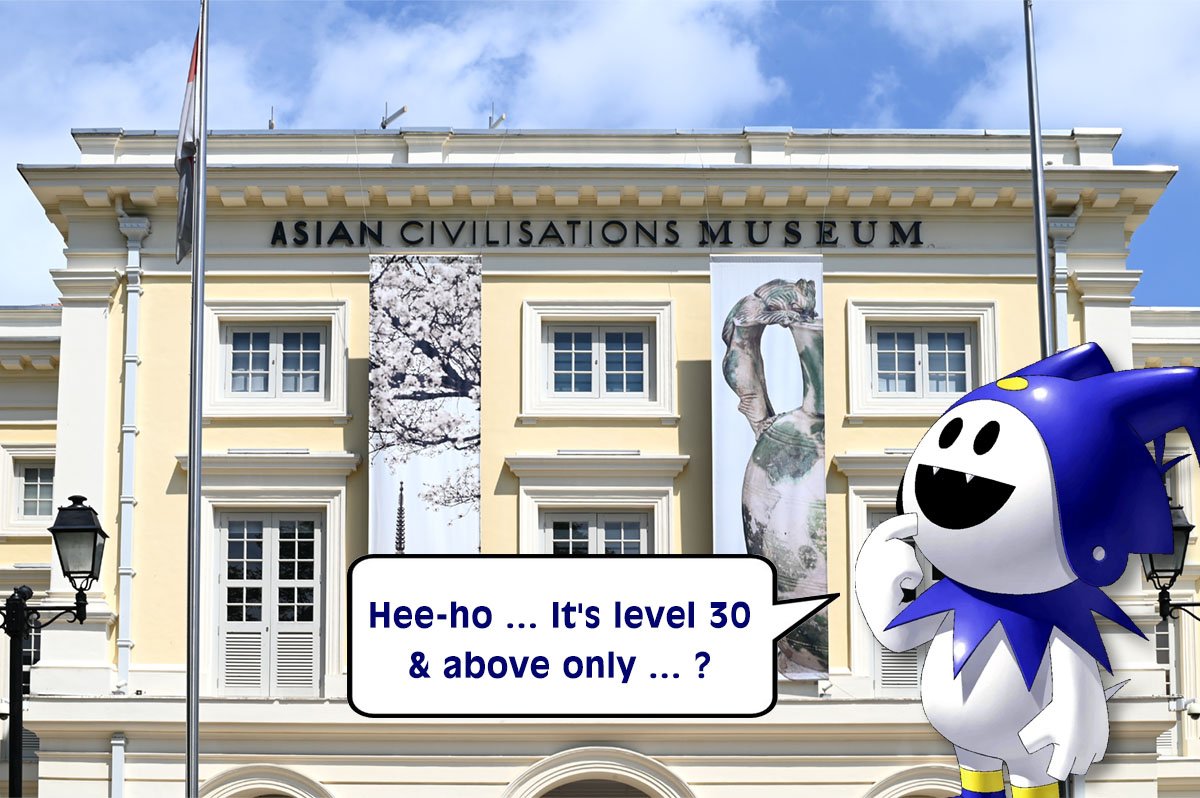