Believe it, or not, there’s a mini Hell’s Museum at Jalan Kayu.

It seems an appropriate time to write about hell in Singapore, awful as it is to say.

With unprecedented numbers of COVID-19 community infections, and a school killing, it’s clear that the weeks ahead for Singapore are not going to be easy. At the moment, there are even talks about downscaling this year’s National Day Parade. (Update: It was postponed)

Coincidentally, and right before the community infection cases started spiking, there was also much hype about the renovated Har Par Villa. Particularly, the upcoming reopening of the Hell’s Museum attraction.

Well, that reopening is scheduled for October 2021. The way things are going, who knows whether it would be delayed. (I hope not)

Meanwhile, if you’re aching to have a taste of Chinese Hell, as in the Ten Courts of Hell version, err, you can rejoice? Har Par Villa is hardly the only place in Singapore that’s “hell on earth.”

Tucked away in a basement of Jalan Kayu Joint Temple is a mini Hell’s Museum. It is but a few hundred square feet large but every inch of this unusual attraction is packed full of information. The entire basement is also AIR-CONDITIONED and very atmospherically lit.

The hellish dioramas here aren’t as gory as the ones at Haw Par Villa, to be honest, but what they lack in blood, they more than make up for with complexity. If you are fascinated by such things, let’s just say you’d be in for a hellish treat.

Some information about Jalan Kayu Joint Temple before I continue. Located alongside the southern end of Jalan Kayu, at the fringe of Sengkang Estate, the complex was built in 2011 to house four relocated temples. These being:

The summary, if you’re fascinated with Chinese mythology and Taoism, this is the temple to head to. While compact, you can easily spend an hour here examining the many altars and statues. Photographers fond of eastern religious motifs will naturally find it a paradise too.

As for the main altar of Bao Gong Temple, what’s most fascinating about it is that replicas of the three legendary guillotines used by Justice Bao are on display. I’m sure fans of the many TV series about the judge can easily identify the characters represented here too.

Bao Gong Temple occupies the least space in the complex, and so the staircase leading down to the museum is hard to miss. (It’s to the left of the main entrance)

Mythology trivia: Heibai Wuchang, or the “Black and White Impermanence,” are the famous officers of Chinese hell responsible for escorting spirits to the underworld. Xiaoziye, on the other hand, is a character from The Twenty-four Filial Exemplars who was tasked with overseeing the underworld treasury after he performed penitence for not honouring his mother.

In Singaporean Taoism, they are often collectively referred to as First, Second, and Third Master.

Beside the altar to Yanluo Wang is the chief attraction of this hellish mini-museum. Here, the terrifying Chinese Ten Courts of Hell are meticulously presented in a row, with each court presided by a corresponding judge.

Other than terse English explanations, what’s fascinating about the dioramas is that they somewhat resemble Chinese funeral offerings. You know, the incredible papier-mache structures, condos, cars, etc, burned for the deceased?

In all, staring at the dioramas is a very ghostly experience.

More Chinese mythology trivia. It isn’t odd, at all, for a Hell’s Museum to be located within a temple enshrining Justice Bao. In Chinese Folklore, the impartial judge is said to be the Fifth Judge of the Ten Courts of Hell.

So the saying goes, Justice Bao judges the living in the daytime, and the dead after sunset. 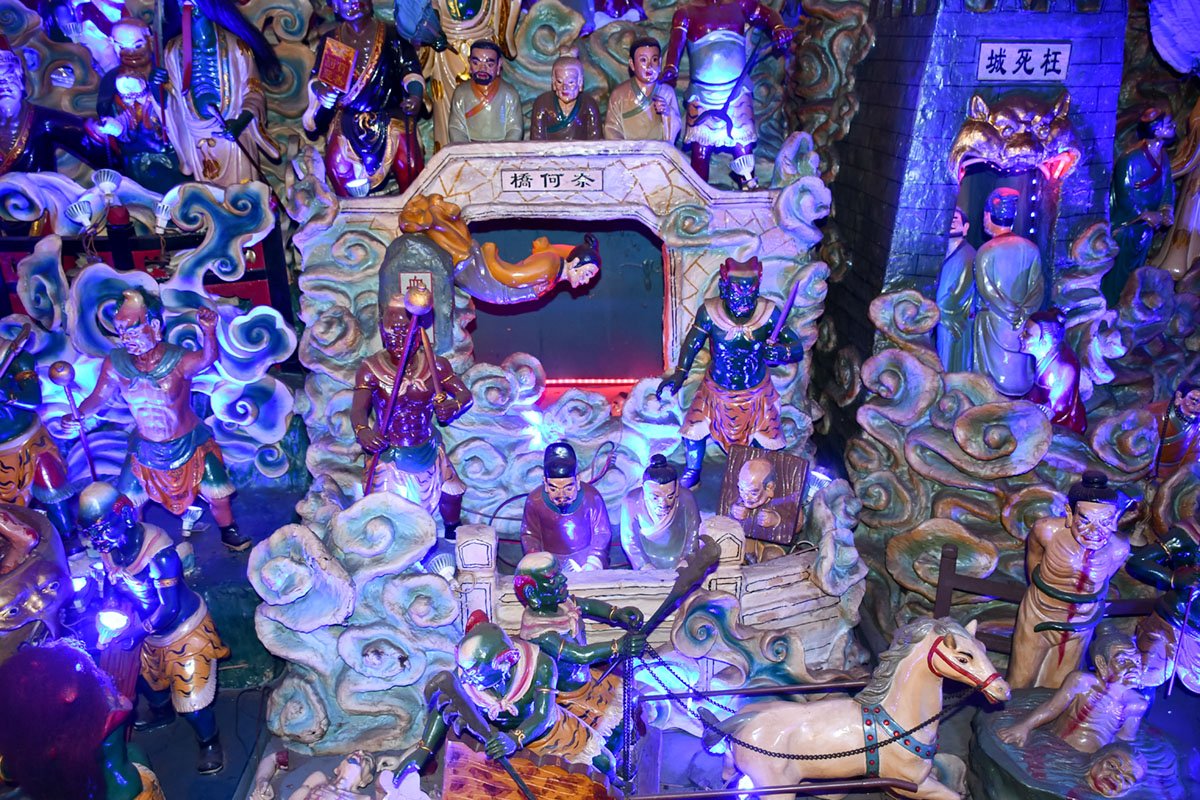