Singapore’s Kampong Glam is nowadays not just Malay heritage, or hipster bars and shops, it’s also a slice of West Asia in Singapore.

In the early 2000s, I made a quick visit to Haji Lane while on the hunt for affordable new office space.

I wasn’t impressed by what I saw, to be honest. While the unit itself was decent, my staff and I were appalled by how narrow the alley was. “How are clients going to drive into here?” My assistant cried. “The whole road feels so boxed in!” To which I heatedly agreed.

A few years later, right after I picked up photography, I spent a Saturday afternoon exploring the entire Kampong Glam Conservation Area. I did manage to take some good (practice) shots at Arab Street and the Malay Heritage Centre. but overall, I thought the area was rather sedated and dull.

Well, that was the previous me, with no eye whatsoever for the unusual and the different. The restoration works in recent years also mean I ought to have “revisited” Kampong Glam a long time ago.

I seriously should have. Because while the area retains its traditional character, so much more has been added. Right before the majestic Sultan Mosque, it felt almost as if a slice of Mediterranean Turkey has been installed in Singapore.

For quite a while now, the alley that previously appalled me has been celebrated by travel bloggers worldwide as one of the new “must-visit” destinations of Singapore. In some cases, ranked even higher than Gardens by the Bay and MBS.

It’s seriously different now. While Haji Lane is still unusually narrow, the colourful lifestyle establishments flanking it give the entire stretch fresh character. Needless to say, the famed murals nearer to the Beach Road entrance are vivid splashes of cosmopolitan identity too.

After snapping over 20 shots, I decided to have a quick, sweet break.

Moving on to Arab Street and Bussorah Street, the Heart of Kampong Glam

The cosmopolitan feel fades away the moment I entered Arab Street. Replaced by a distinctively Middle Eastern, or should I say West Asian character.

I didn’t know so many Lebanese and Turkish restaurants have opened in Kampong Glam, with so many of them intricately decorated with blue tiles and all too. While standing before Sultan Mosque, I had a strong Western Mediterranean moment.

Setting aside photo-taking for the moment, and after much indecision because there were so many choices, I opted to have dinner at Nasrin Restaurant.

This restaurant is a sheer delight to relax at. Service was prompt and friendly. The tiled alcoves facing Baghdad Street are spectacular too.

And the Lamb Kofta that I ordered! I was still stuffed from the sweet pastries I had earlier. But one sniff of the meaty aroma and I was instantly hungry again.

Sunset was near after I finished dinner. Whipping out my camera, I hastened back to Sultan Mosque for some blue hour shots.

Back to Haji Lane 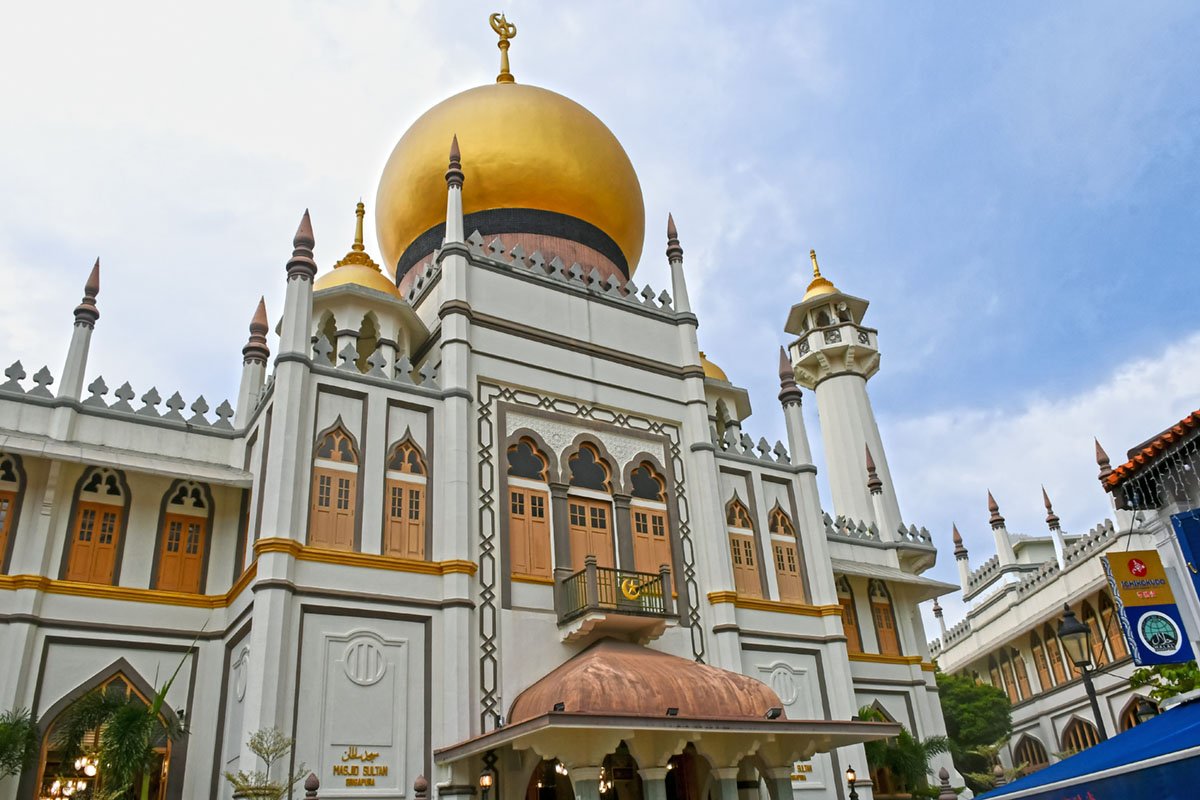