I’ve been wanting to do this walk for a while now, reasons being:

Yup, the whole walk, which lasted 2 hours, was a mix of nostalgia, exploration, and spiritual photography for me.

Before I share my pictures, let me just say too, oh wow, I finally discovered why the word Bukit i.e. hill is in the area name. (Inane)

It’s a flat drive along the actual Jalan Bukit Merah. But once off it, it’s hilly, with lots of steps and slopes. In other words, the whole two hours was a sweaty experience.

As I was using public transportation, I alighted at Tiong Bahru MRT Station and started my walk from there. In all, it took me around ten minutes before I reached Jalan Bukit Merah.

While there, my assumption was that Tiong Bahru Orchid was built in the 1970s, because many of the blocks have distinctive ground-floor units. In truth, the estate was built in 1967, according to property websites.

Which makes the estate one of the oldest in Singapore. Older than me. (Hmm…)

Have to say it, for a public housing estate that’s over half a century old, the blocks look remarkably well-maintained. I don’t know about the inside, but the exteriors are cheerful and clean.

Enough of HDB sights. On to the temples of Jalan Bukit Merah.


Like Wat Ananda (see below), Kai San Temple was one of my main destinations for this walk. The short of it, I’ve passed by this compact Taoist temple numerous times over the years but have never, ever stepped inside. (I don’t even know who’s the main deity worshipped) Also, I’ve long been fascinated by the imposing statue at the entrance, the mythology fan I am.

FYI, Kaishan Shenghou is the deified form of Jie Zitui (介子推), a Spring and Autumn Period aristocrat famous for his loyalty.

Next on my itinerary, Wat Ananda Metyarama. A short walk away from Kai San Temple.

Founded by the Venerable Luang Phor Hong in 1918, Wat Anada Metyarama is Singapore’s oldest Theravada Buddhist temple and monastery. Extensively renovated in recent years, and with a futuristic extension added, the temple is also a spectacular depository of Thai Buddhist art.

Having not read up about the renovations before visiting, I was absolutely blown away by the stunning murals surrounding the main altar. Staring at those religious masterpieces was hands-down the high point of my Jalan Bukit Merah walk.

Located behind Wat Ananda, and with very eye-catching yellow walls, Tai Yeong Kon is, per its name, dedicated to the Taoist God of the Sun. (Taiyang Xingjun 太阳星君).

Unfortunately, while I could enter the grounds, the main hall was closed. I thus have to settle for just a peep into the main courtyard.

A Yummy and Sticky Break!

Moving on in the direction of Outram, I passed by the following shop.

Ang Ku Kueh! Red tortoise pastry. How could I not have one given I was in Bukit Merah i.e. red hill?

‘Right. This post has gone on for a little too long, so I’ll wrap up with these two pictures.

All pics taken with my Samsung S20+ 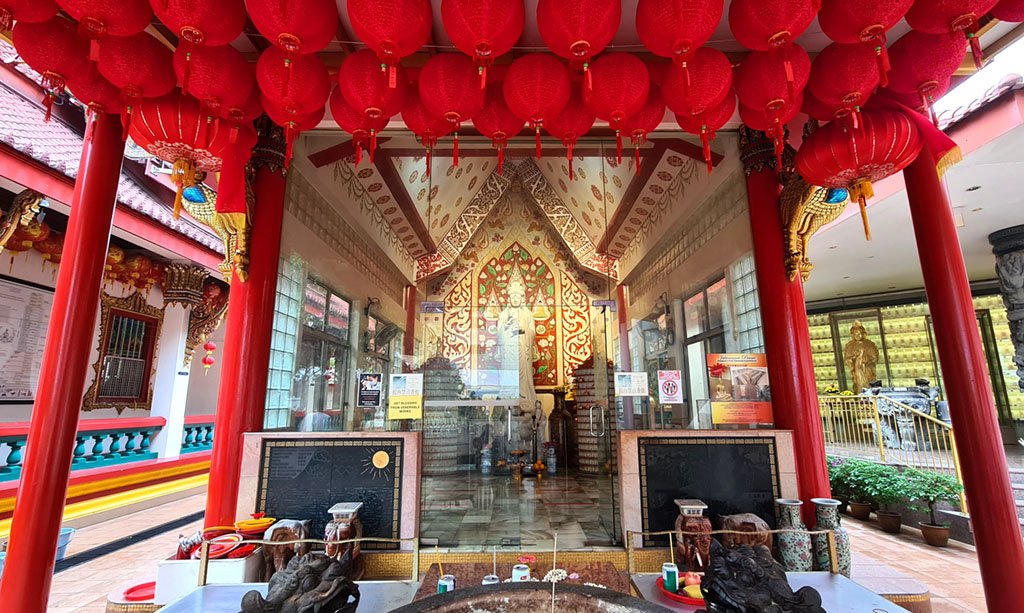