Still reeling from the shock of Singaporean BMT and bullies, I took to sulking every weekend at Kinokuniya Shaw House. (Branch’s long gone, btw). One day, while … browsing-without-buying for hours, I came across a strategy guide for a JRPG I’ve never heard of. One look at the contents and I was mesmerised.

Yeah, mesmerised. Very simply, that guide was like a lexicon of world mythology. I’ve never seen so many mythological characters assembled within one game.

That game was Shin Megami Tensei I for the SNES, which I eventually bought on Christmas Eve 1993. To be honest, my limited Japanese reading abilities back then dulled my playing experience of it; I didn’t complete the game till much later.

Despite that, I still fell in love with the unique apocalyptic and philosophical angle of the franchise, as well as the plethora of “demons” you can “befriend” in it. Needless to say, I bought every sequel in the years to follow too. These included the Majin Tensei and Persona offshoots.

Jump forth to 2005 i.e. the PlayStation 2 era, I bought SMT III: Nocturne Maniax together with my PS2, and spent two months obsessing over it.  The unforgettable story and characters aside, what I really loved about this episode was the music. I still have most of the tracks in my phone.

In addition, the soundtrack familiarised me with Shoji Meguro and his signature styles. In July this year, when I read that SMT III would be re-released, I immediately decided I MUST have a go at arranging one of the tracks for the Yamaha Electone. After much fanboy fussing, I decided Title Loop 2 would be the “one.” While my favourite is still the first Kagutsuchi fight track, this one felt to be the most possible to arrange. 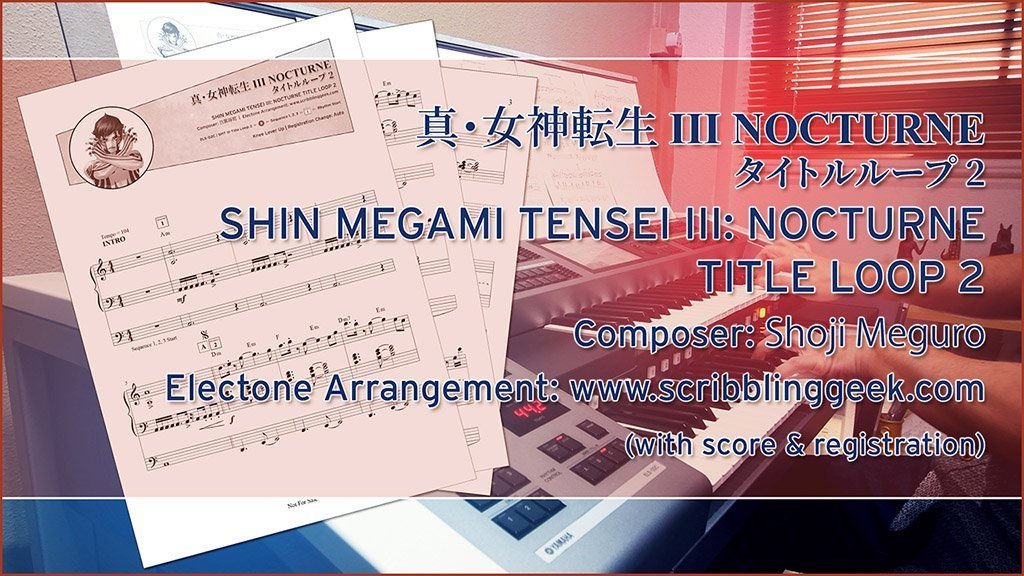