A couple of days ago, I did something that I have not done for decades. (Not exaggerating) I attended a music lesson. Specifically, a free guitar trial lesson at The Sixth String, Singapore.

How I came to know about this offer is another story, but as for intention, I’m putting into action a notion I’ve been toying with for a long time. This being: whether I should attend some fundamental courses for different musical instruments as so to strengthen my Electone programming and playing skills.

To share, in the 90s, I experimented with the violin and choir singing, and the Chinese Di Zi. While I ended up nowhere with all these, the likes of, I never did play a decent song with the instruments I tried, they did still contribute to my keyboard skills. As in, these lessons at least gave me some ideas on how to better programme and articulate certain sounds on the keyboard.

Having long loved guitar sounds, I thus felt some formal learning would do me good. In all, the trial guitar lesson offered by The Sixth String was not only informative, it was highly enjoyable too. I’ll share too that midway through the session, I realised I have been using odd sounds in some of my arrangements too. This was enlightening, if rather mortifying.

A Discussion Before Teaching

To start with, I believe I somewhat baffled the instructor when arranging for the trial session.

Flamboyantly, I stated that I was keen on the Nylon Guitar, because that’s one “sound” I love to use on the keyboard. I didn’t realise that by saying so, I was implying the sort of music I’d like to learn and the way I wish to learn. In other words, I was being oddly specific for a beginner.

But this was quickly cleared up, and I have to say the instructor, Miss May Tan, did so in a highly informative and entertaining way. She began by meticulously introducing the different families of guitars, including playing styles, suitability for beginners, and academic routes. Throughout all, she also repeatedly asked about my song preferences and learning objectives.

Later, she shared how this introduction, or discussion, is a matchmaking process. Different learning objectives require different instructors, particularly for students not new to the instruments but seeking enhancements in certain areas/techniques. The school thus always starts with a careful pairing of students with suitable instructors.

Now, I must say I find such “matchmaking” fascinating. While I have seen the same process in other schools and courses, it’s rather rare for an instructor to go into such depths. Especially for a free trial lesson. I feel this highlights this school’s devotion to teaching.

I should highlight too that there was no hard selling of any sort throughout the introductions; May was purely talking to me as a musician eager to share knowledge. This, in turn, was what made the conversation so enjoyable. I could respond to her as a fellow musician, albeit one for a completely different background.

Reading Tablature, Strumming, and Others

I have another thing to reveal. I never bothered to properly learn how to read guitar tablature.

Despite all the online resources available, I never got down to it. Mostly because I get turned-off i.e. I stop the moment something puzzles me.

Well, a few minutes with May resolved whatever queries I have. Watching her perform some sample songs also cleared up some questions I have about acoustic guitar styles. On the latter, I have to say seeing a real person do it before you is way easier to learn compared to watching videos. For a start, you can immediately ask about areas you don’t understand.

Here’s another thing too. I ended up enjoying the discussion and demonstrations so much, I never did get down to practising with one of the guitars provided. I … ahem, am usually rather slow in learning and so I tactfully avoided doing so …

But as someone well-familiar with music learning and tutoring, I can say this. I think The Sixth String has the right approach to music teaching.

While it’s not a common occurrence, there are music instructors who teach based on what they feel students should learn, or perform, rather than what students themselves are looking for.

I can say with relative confidence this wouldn’t be the case for The Sixth String. You can also tell from their Facebook page that they welcome all students. For a start, they didn’t mind an older (weird) dude like me.

In short, I think I might just try their package of 4 lessons for SGD 100/-. I might even consider longer-term courses.

With regards to experienced musicians, well, I think it’s always beneficial to have some knowledge of how other instruments work; this particularly important for keyboardists.

Admittedly, the latter might result in the reduction of time and devotion for one’s “key” instrument, if you know what I mean. But that’s where trial lessons and packages are useful. Bluntly put, you don’t have to commit till you’re sure you can and you want to.

I will especially encourage keyboardists to give this a think.

The Sixth String, Singapore is at:

And if you’re indeed heading down, don’t forget to check out nearby East Coast Road. One of Singapore’s most colourful food streets!

My other Singapore posts. 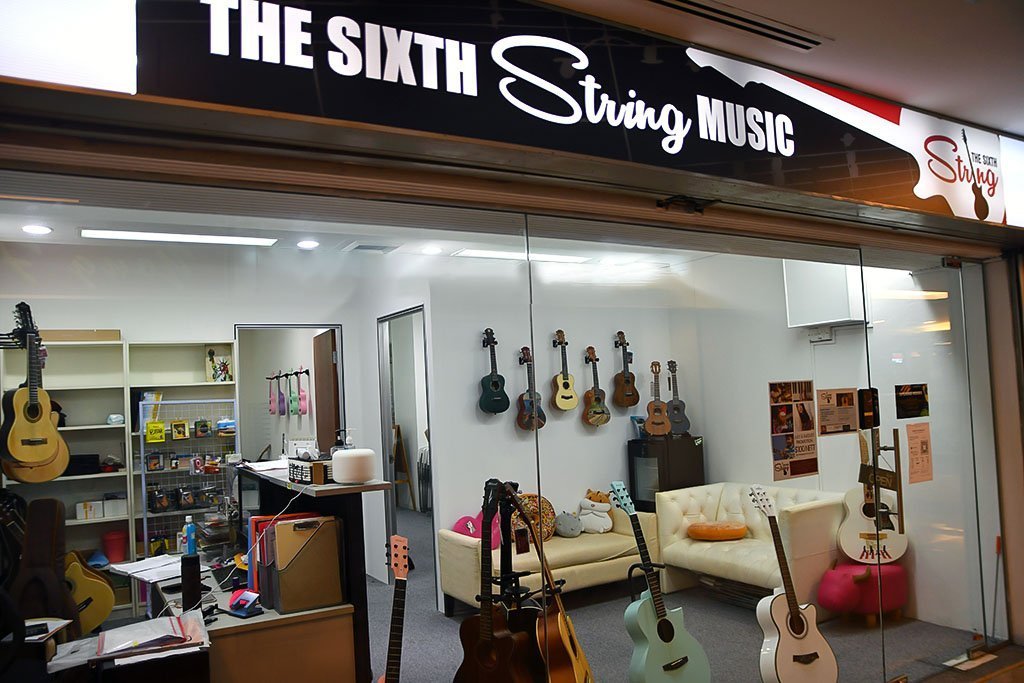