Every November, cities and parks across Japan are adorned with thousands of lights to welcome the year-end. Here are some Japan winter illumination 2018 sites I visited during my recent trip.


This year, Caretta Shiodome is again partnering Disney for its popular winter illumination.

According to official write-ups, the main set alternates between featuring Frozen and Tangled each week. With but three days in Tokyo, I only managed to catch the free Frozen performance, which featured a light sequence synced to Let It Go and Do You Want to Build a Snowman.

The performance was, on the whole, wintry and dazzling. If you like Disney Princesses and everything about them, this is something not to miss in Tokyo this year-end.

(Shiodome Caretta is a five to seven minutes’ walk from JR/ Tokyo Metro Shimbashi Station. But check maps beforehand to ensure you exit on the right side. It’s the side facing the Yurikamome Station)

Tokyo Midtown’s light-up for this year consists of various items surrounding the massive complex, the highlight of which is, without a doubt, the Starlight Garden.

This was really pretty during the looping performances, brief music sets made all the more atmospheric by changing hues and mysterious mists. The entertainment, erm, also puts you in the mood for some serious expensive shopping thereafter in the mall.

Tokyo Midtown Christmas Illumination 2018
Nov 13, 2018 to Dec 25, 2018
17:00 to 23:00
Free Admission
(Tokyo Metro’s Roppongi Station has an exit leading directly to the main complex of Tokyo Midtown. However, the station is expansive. You need to read the signs to know which exit to use)

This was one Christmas Market done right!

It’s compact. There are light-sculptures both traditional and avant-garde too.

The rows of Christmas-y stores also feature a great mix of gifts and food, which you could enjoy while listening to live music from the nearby stage. Though I only spent an hour here, I immensely enjoyed my visit. It was a wonderful way to end my one and only day in Fukuoka this trip.

Okay, this was the big illumination highlight of my trip. Big as in, this was hands-down the most expansive festive light-up I’ve ever seen! (Actually, I think it’s the biggest display for Japan Winter Illumination 2018 too)

While Ashikaga Flower Park itself isn’t huge, every inch of it was adorned with glittering fairy lights, in addition to which there were several huge screens featuring thematic presentations.

If you ask me, the park is the one MUST, must-see site for Japan Winter Illumination 2018. It takes a while to reach from Tokyo, and the weather would be chilly. But believe me, the effort is well worth it.

Osaka Station City’s light-up for this year is centred at its fifth level Toki no Hiroba plaza. It’s not particularly elaborate but I think the airy location and the simpler motifs infuse the set-up with a quiet romanticism. For me, it was pleasant resting here for a few minutes, after a full day in Osaka and Kyoto.

Osaka Station City Twilight Fantasy 2018
Nov 1, 2018 to Feb 14, 2019
17:00 to 23:00
Toki no Hiroba Plaza (時空の広場); 5th Level
Free Admission
(I’m still trying to figure out the behemoth that is Osaka Station City. And it seems to grow every time I’m getting somewhere! All I can share is, the plaza is on an upper level. Keep taking the escalators to the levels above the JR train gates)

Some works were still ongoing around the main set while I was there. (I passed by on the night of the 13th) Nonetheless, the huge tree was still a spectacle to look at. A giant within the bigger behemoth that is Kyoto Station.

That’s it for this post on Japan Winter Illumination 2018. I hope I’ve inspired you to visit Japan this November and December!

Take a look at my Christmas in Singapore 2018 post too! 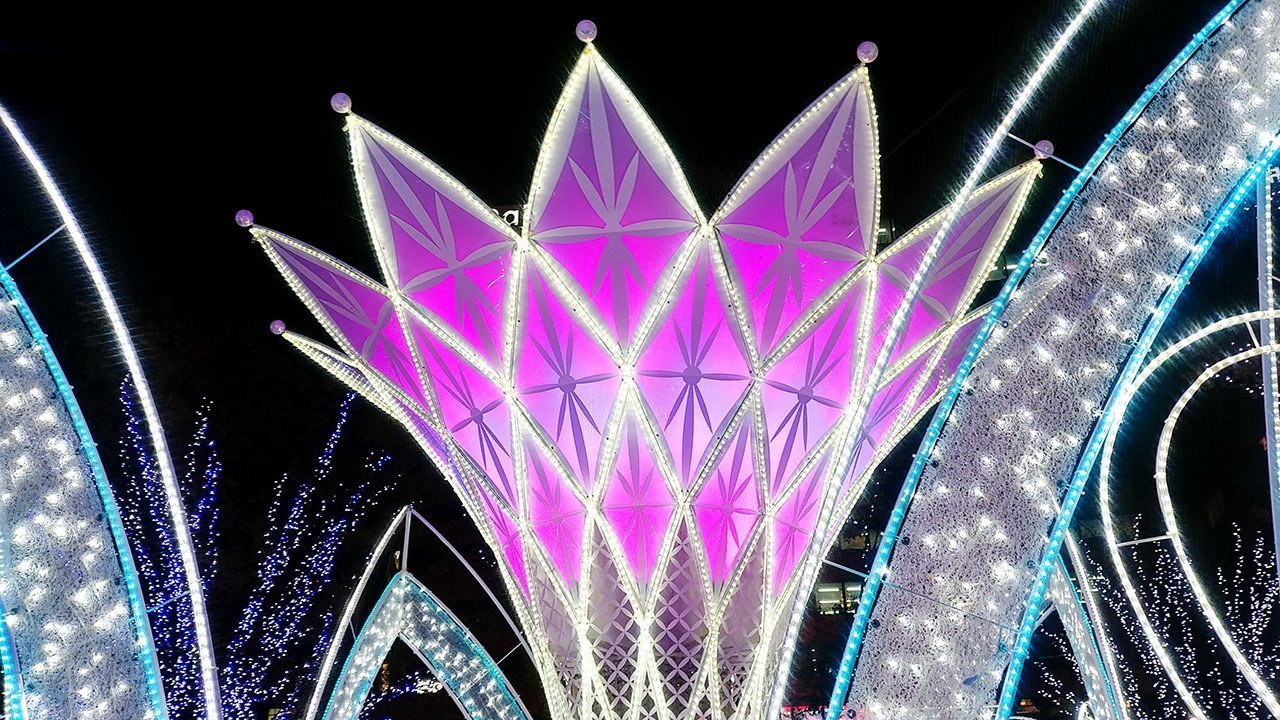