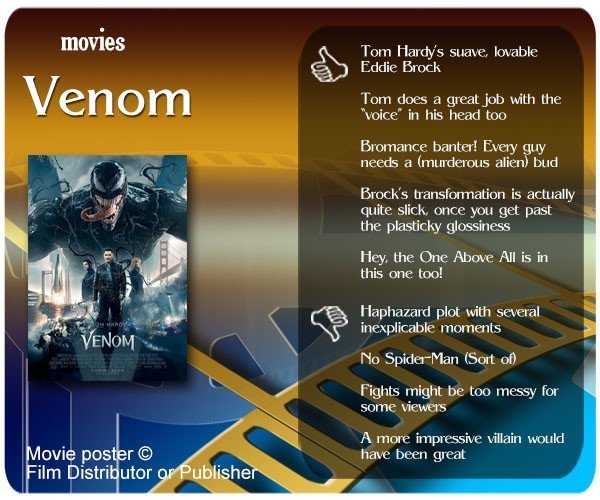 Investigative reporter Eddie Brock is sacked after annoying the rich and unscrupulous Carlton Drake during an interview. Subsequently, he is contacted by Dora Skirth, a laboratory staff of Drake, who claims to have evidence of her employer’s misconduct. Unable to find another job, Brock decides to investigate the accusations, and successfully infiltrates Drake’s research complex with Skirth’s help. There, Brock uncovers plentiful evidence of Drake’s unethical use of humans in medical research. He also comes face to face with a nightmarish threat, one that would transform him forever.

There’s a lot of hatred for Venom (2018 Film) at the moment. To cut to the chase, I think many critics and viewers loath this non-MCU entry because:

In spite of these, I have to say I quite enjoyed Venom (2018 Film). It’s nowhere near being one of the best superhero movies I’ve ever watched, but it’s certainly more entertaining than, say, the weaker entries of the MCU? (Think Ironman 3 or Thor 2: The Dark World).

Much of this is thanks to Tom Hardy, of course, who exudes just the right amount of ruffian and boyish charisma in practically every shot he’s in. Add to that is also the bromance, as in all that inane banter between Brock and the symbiote. While the latter didn’t much help the faltering story, they still provide enough light-hearted moments to distract me from the weakest bits. At least till the finale.

Speaking of which, the climactic confrontation strongly reminded me of the curious relationship between Shinichi and Migi from Parasyte. Could it be that the writers were inspired by that manga classic during their conceptualization of the story?

You know, I’m kinda convinced they were. Otherwise, why was the word “parasite” repeatedly emphasized in the last third of the movie?

The mayhem continues with Venom: Let There Be Carnage!