Shrieking brats, an unfinished glass of tea, and one unhappy, outraged mother.

This happened yesterday evening, right after my excursion to the Botanic Gardens.

Before I continue, let me state that I’m not seeking social justice, encouraging online lynching, or out to portray myself as some sort of social vigilante.

Had any of these been my purpose, I would have recorded the incident. I didn’t do so despite having my DSLR, and tripod, and two phones with me. Believe me when I say I could have recorded everything in 4K and 320-bit audio glory had I wanted to.

If you must, consider the following as my rant . My release valve for having to witness a truly disgusting incident.

After my Botanic Gardens visit, I had dinner at a downtown café. From the moment I entered until the second last bite of my dessert, two shrieking brats from an opposite table screamed and whined their lungs and chests out. They were, by my guess, around three years old or younger. By my guess again, they were also not remotely distressed.

Why do I say the latter? Because neither was actually crying. As in, there were no tears. They purely screamed while placidly resting in the arms of their accompanying adults or while in their seats. Halfway through my meal, I even became convinced that they were those sorts of imps. You know, the sort who find it great to annoy anyone and everyone, for no more than the kick of it.

But, as some would remind, kids are kids, and so everyone, myself included, the café staff included, put up with the din. Everything would thus be no more than just an unpleasant and random encounter, had the great sin of the unfinished tea then not occurred.

You see, after taking like forever to leave, that family was finally halfway out of the café. Probably as glad as I was that they were going, the manager promptly went over to clear their table, only to be snapped at by one of the adults. Presumably, the mother of the screaming brats.


There was a jumble of words but very quickly it became obvious that the unexpected angst was over a tall glass of unfinished tea. (Or some sort of beverage) Apparently, the domestic i.e. foreign helper accompanying the screaming brats ordered that but didn’t drink a drop. Perhaps because of the screaming imps, her employer also didn’t notice the untouched beverage till away from the table and halfway out of the café.

What did the employer i.e. the mother then do? Wow. She snapped at the manager, saying they still wanted the unfinished tea. After the domestic helper took up the glass, she also demanded to know whether the helper drank from it.

When the domestic helper timidly shook her head, the employer snapped again and ordered the helper to finish the whole glass right away. There and then. With the helper panicking and hunched over before her. When it became obvious that the helper wasn’t going to be able to finish such a tall glass that quickly and under those circumstances, the woman allowed the helper to return the glass but launched into a tirade about how the helper always orders food without eating. In other words, wasting her money.

All these with them right in the middle of the café. Meanwhile, one of the shrieking brats was still whining away. The manager was frozen at their mess of a table. I was staring at their backs. The woman wouldn’t have stopped had one of her companions not noticed me glaring.

Now, I know what some people would say. How some would defend the employer too, be it about the screaming kids or about the humiliation of the domestic helper.

Oh, the poor woman was having a bad day because of the kids. It’s that stressful looking after young children. There are also so many incidences of domestic helpers playing punk, as we say in Singapore, and so you must be really stern with them. Probably, most likely, the helper is truly guilty of often wasting food. Thus, she deserved what happened.

I don’t deny the possibility of these suppositions. I swear, I don’t. Yet, even if every defense were true, was there really a need to create a scene this way?

The employer i.e. mother wasn’t alone, please remember. She had at least one other companion, an older woman who looked to be her sister. As irritating as the shrieking brats were, they were also, as I highlighted, just noisy. They weren’t brawling or scuttling about or throwing tantrums. In other words, they weren’t unmanageable, just plain freaking noisy.

Besides, if the woman wanted to bring along her domestic helper to a downtown café, for whatever help that would afford, what did she expect? That the helper not order any food? That the helper  finish every drop of everything?

Let me just say it out loud too that right after they left, I wondered what the employer’s disposition would have been had the domestic helper finished everything i.e. utterly adored her food while the brats shrieked away. How many times have I heard Singaporean employers condemned domestic helpers for only “knowing how to eat?” Did this particular one ignore her beverage because she was too terrified or too preoccupied with the shrieking brats?

And anyway, it’s just a glass of tea. Pricey or not.


If the woman, as in the mother, has a job herself, would she want her employer to publically chastise her for not finishing the food from a company lunch? Would she immediately seek legal address if her employer demands that she stands and gobbles down her unfinished meal, like a punished primary school student, in public?

I bet she wouldn’t gulp down such humiliation quietly. Pardon the pun.

These aside, there were the two shrieking brats. I have repeatedly mentioned them so you should know how annoyed I was by their incessant, high pitch wailing.

The fact that the parents allowed them to do so for near an hour in the café, oblivious to how meiwaku it was to everyone else, gives a strong hint of the adults’ personalities, does it not? No apologies for being so judgmental but that’s how disgusted I was.

In fact, I’d go to the extent of using the Cantonese phrase 好人有限 * to describe the adults.

Seriously, how would those two rascals turn out in life growing up under such adults? Give a few years, how would these brats be treating their domestic helpers? Or other people? Or each other?

I shudder to imagine.

* 好人有限 literally means “a limited good person.” I’m sure you can figure out the connotation. 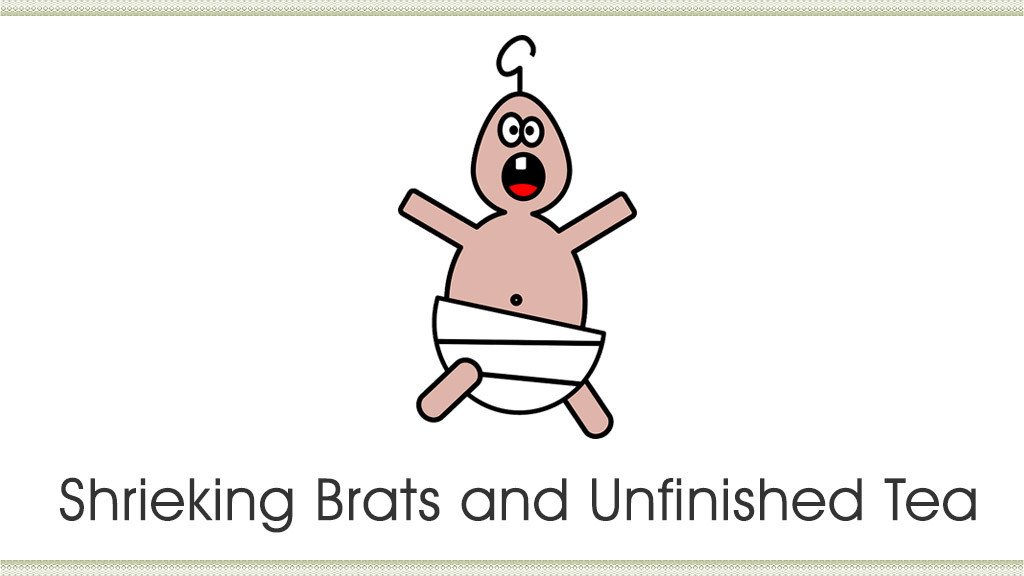