In an older post, I highlighted how blogging encourages you to try new experiences. I’d now add that blogging also compels you to dig deeper into whichever niche you write about, and, if you’re not careful, suffer from insomnia because of itchy desires.

Nope, you didn’t read wrongly. I literally mean that.

What happened was this. In the beginning, I did what every other new blogger does and joined several social media groups for the purpose of networking a.k.a. self-promotion. (Ahem) Among all of these, my favourite were the retro video games and retro memories groups. The former of which I could linger for hours just geeking over the pictures and screenshots posted.

If you belong to such groups, you’d sure know many members also take pride in showcasing i.e. showing off their setups. Yes. Intricate display cases with every video game console since the 80s. Entire shelves stocked full of retro games. Every wall of a playroom adorned with collectors’ figures, with the walls themselves covered with a screengrab from Mario or Zelda, or Donkey Kong.

Short of it was that it didn’t take very long for me to turn into an avocado. For months, actually, for over a year, I yearned to mimic such devotion in my own den. Problem though, I didn’t seem to have space. The finish on my walls, left by the previous owner, also forbids any form of wallpapering.

Worse, I neither have enough retro games or still-functioning game consoles to display.

No thanks to these, I was forced to shelf all intentions. I comforted myself by thinking, ah, screw it, why give yourself more things to dust/clean every week?

Well, all that changed last week. And again it’s because of Hardy Boys; devious Franklin W. Dixon continues to exert an influence on me.

While hunting for the books at my mother’s place, I noticed how my mom had shrink-wrapped all my childhood toys. My Lego sets, Castle Grayskull, M.A.S.K., etc. Not only so, she obviously also cleaned everything before wrapping. While the toys weren’t exactly pristine, they weren’t exactly unpresentable too in their current state.

It was while seeing my old Point Dread & Talon Fighter set that I suddenly realised, hey, you don’t have to just “do games.” Mix everything up! Cross display as you cross niches on the blog!

Once again, one thing led to another, and by the next evening, all my (wrapped) toys were at my place. That kickstarted one week of further cleaning and furniture buying for my first geek display case.

I’m proud to say this. I go to IKEA for most of my furniture needs.

Ask any Singaporean and you’d probably receive mixed reviews about the Scandinavian Chain though. To me, though, they still provide the best balance of affordability, design, and reasonable quality.

In this “case,” it helps too that IKEA had exactly what I was looking for; something under a hundred bucks as well, I add. The gist of it, I set aside work for one afternoon and headed down to the Alexandra Road branch. While I was there, my refreshed toys awaited in a row in my living room. Their soon-to-come renewed life was on the way.

By the way, I’ve read more than once that IKEA makes more money from food and beverage sales than from selling furniture. No idea whether this is true but honestly, I wouldn’t be surprised if it is indeed so. (You’d agree if you’ve seen the crowds at the Tampines Store)

The DETOLF display case wasn’t the only thing I bought, by the way. The way furniture hunting usually goes, I ended up buying a TV table, a chair, and a bagful of curiosities too.

But I’m going to skip ahead now and skim over all the bits about waiting for delivery, buying MORE toys, etc, etc. Let me close this section by saying, if you are thinking of getting Ikea’s DETOLF, you might want to consider paying for assembly.

The process requires two persons and it took my dad and me over an hour to assemble. Worse, clumsy me nearly cracked one of the glass panels while at it.

I’m undecided on whether I should put in Master of the Universe figurines. I still have all of mine. Unfortunately though, all have gone soft in the legs i.e. the rubber thingy connecting the legs are lax due to age. I kind of prefer the minimalistic feel too.

Plus, believe it or not, I don’t have He-Man. I loved the other characters but I’ve never liked He-Man.

The Japanese compartment is currently the weirdest, the most unfinished, and what I’m going to work on after this post. My concept is, erm, a consolidation of the pop culture symbols Japan is famous for.

To fill up the background, I bought a 3D puzzle of Himeji Castle. As I have never done any 3D puzzles before, I’m not sure how this is going to turn out. Fingers crossed I wouldn’t make a huge mess of it.

Finally had time to sit down and finish the CubicFun puzzle.

Finally had time to sit down and finish the CubicFun puzzle.

The box highlighted 200 – 220 minutes necessary for completion. I took nearly all four hours! In summary, the main difficulty wasn’t assembling or identifying the pieces. Everything was well-marked with clear instructions.

Instead, it was the end bit. The climax, so to speak, as in when you piece together the various assembled segments. Everything being made of paper, “forcing” the mini structures into place required a lot of finesse.

If you’re trying out your own CubicFun 3D puzzle soon, I have the following tips:

Not quite what I was hoping for. Now it feels a little crowded. I also had to retire Arahabaki.

Saga and Death Mask on the castle is also … weird, I know. But strangely, that’s the part I like. Oh well, such things are constant work-in-progress.

As For the Rest …

Where the geek display case currently is was previously an aged bookshelf where I stored all my older video games. All of these are now in the lower compartment of the TV table I bought while shopping for the cabinet.

I finally got down to watching Black Mirror. You know what, my display case is in Robert Daly’s office! Of all the people! 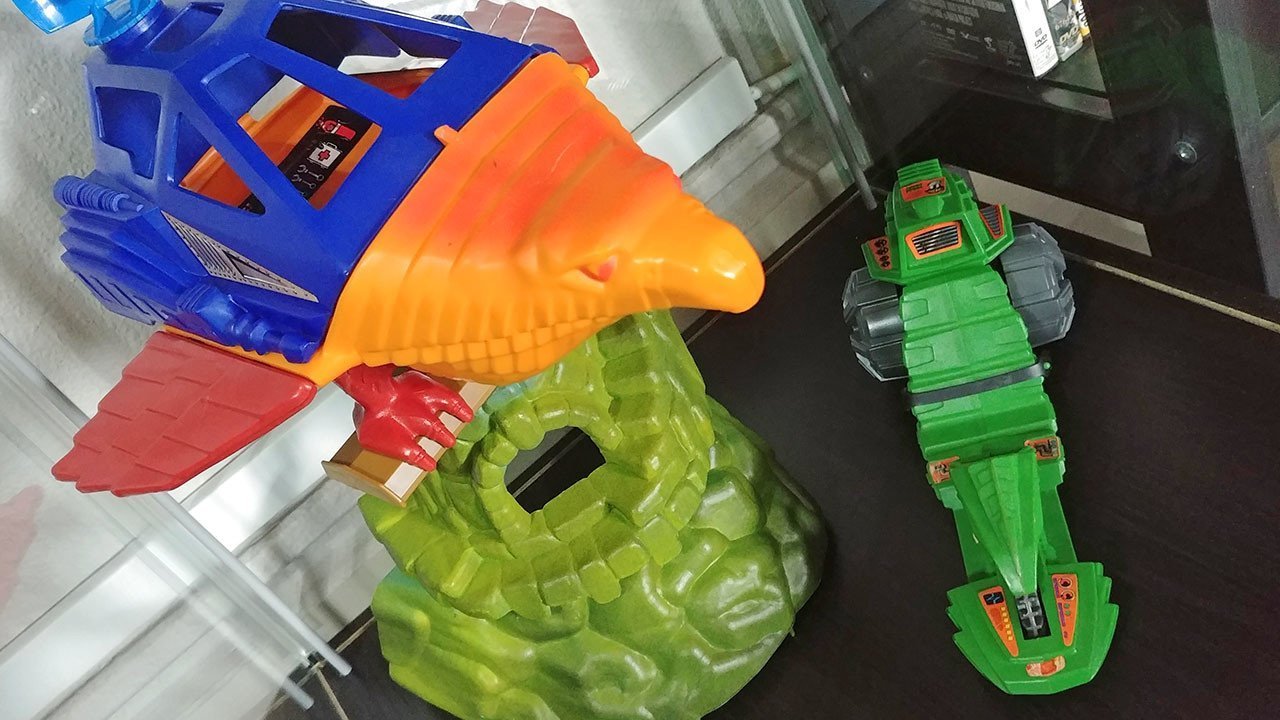 Article Name
Geek Display Case Setup Mini Project
Description
Buying and setting up a geek display case. My first attempt at such an endeavour and a great reason for digging out my old toys.
Author
The Scribbling Geek