What I love about the new Far Cry 5 open world. What I dislike too. As usual, all screenshots belong to Ubisoft.

For today’s open world gaming and open world shooters, this is practically a must. Having said that, it is still always a delight to see developers infuse a virtual realm with numerous touches that are meant for no more than immersion enhancement. Could I go to the extent of saying this reflects the degree of respect the developers have for fans?

Hope County, Montana, is full of such respect.

Generic graphical elements do still repeat often. For example, the titles on bookshelves

On the other hand, this is more than compensated by a slew of location-specific decorations that wonderfully bring these spots to life. Adornments such as posters featuring cider-making events at an apple processing plant. Medicinal bottles at ranger posts. The likes of.

Absurd as this might sound, I think such decorations expand playability. As in, other than murdering people and animals, there are other things to enjoy?

I for one love to stroll about liberated spots meticulously checking things I’ve glossed over earlier. Believe me when I say there is such a delightful, triumphant feeling during such examinations.

You can’t see it from my screenshot above, of course. So allow me to describe. As I mark the peggies, I hear gospel singing, someone droning on a TV, and a pesky crow cawing in the distance.

Closer to the outpost, the droning coagulates into discernible words about families not caring … no one caring. As I edge towards the centre hall, a woman’s voice takes precedent. She promises an otherworldly peace. Her statements intermingle with the crackling of a fire …

Naturally, such audio effects are also present in older Far Cry games. Never with such complexity, though. The cacophony injects the open world with a realism that I can only describe as sublime. I mean, more so than sight, sound works on our mind at a deeper level, does it not?

And this is with me never having been anywhere near Montana. I wonder how the experience would be for someone who is familiar with Big Sky Country. A player who actually lives there.

Like: Most Gamers Would Be Able to Enjoy Far Cry 5’s Open World

I’m fortunate enough to experience the Far Cry 5 open world with a relatively beefy system. But I haven’t forgotten those (student) days when prior to buying a new game, it’s imperative to pour over system requirements.

Pour over, then bitterly accept that my budget system will never do justice to the new game.

Here’s the good news. Various write-ups are confirming that Far Cry 5 runs decently even on lower-end graphic cards i.e. lower settings. There are expected discounts here and there, but Hope County still looks gorgeous on the whole.

While this doesn’t involve me, it’s great to see a major developer isn’t just building new titles for, forgive me for saying this, the technically endowed. Let’s face it, how many of us upgrade our cards and CPU every year, even if we can afford it? It’s nice to be able to appreciate a game without having to fuss over technical requirements too much.

I mentioned this in my Far Cry 5: First Impressions post. Let me expand on it

I love the serenity of Hope County Montana. Particularly how you don’t get mauled by some animal every other minute.

For example, eagles. Those goddamn flying demons of Kyrat.

Don’t get me wrong. I know beastly beasts are an integral part of the series. Almost a signature, even. But every so often, I really just want to, you know, stand in the bushes and admire the scenery. WITHOUT some furry fiend disembowelling me the next moment.

Whatever thrill involved with such attacks gets old real fast too, and then it becomes a downright nuisance. In fact, haven’t you had this experience in Far Cry 3 and 4?? You’re five seconds away from your destination. You spent 20 minutes trekking there. Next thing you know, it’s grey screen and you have to start all over again because some tiger or bird decided to give you a piece of its mind.

I’m glad the animals of the Far Cry 5 open world are still aggressive but inclined to keep their distance more often. I might as well add that in a way, this feels closer to real life.

You’d know about this if you’ve been reading up. There are still containers to loot in Far Cry 5. However, they no longer contain pure sellables like figurines, magazines, etc.

This takes away some humour from the game. You know, when you find things like part 3 of Himalaid or a picture of a dwarf pointing at the camera with his eleventh finger.

I’m still okay with the change, though, because it addresses what I feel is the worst irritation in older FC games. This being that absurd situation of loot (full), wallet (full), loot (full!) with every takedown and every box searched.

The whole system of limited bag space just didn’t go well at all with the plentiful nonsense found all over the previous titles. While this latest change doesn’t completely remove the problem, as in you still have to manage craftables, it at least reduces the annoyance by half.

Painfully limited inventory space is one reality of life I seriously do not appreciate in an open world game.

And nope. I didn’t remember wrongly. I know towers are frustrating and time-consuming, a nuisance towards end-game. Yet, don’t the end cinematics always compensate? That euphoric presentation of the associated area when you finally, FINALLY, reach the top of one of those rickety pylons?

I was utterly thrilled the first time I cleared a tower and I confess to still being in love with that joy. Sadly, this obviously wasn’t the case for most other players. To the extent, Ubisoft decided to trash the whole mechanic altogether. Damn. Damn …

Dislike: Lack of Side Adventures

Maybe I’m not deep enough into the game. Or maybe it’s being reserved for DLCs.

I’m mildly disappointed that every quest is directly related to Joseph Seed and his insane Project at Eden’s Gate. Other than missions intended to compromise the stranglehold of the cultists, there’s nothing else you can obsess over.

No hunt for serial killers. No archaeological quest for WWII history. Nada.

I guess some players would appreciate this. Those quests could often be a lengthy distraction.

For me, though, they add to the richness and believability of the open world. I mean, come on, it’s such a complicated land. Surely the only stains on it aren’t cultists? There has to be must be more? Much more?

PS: I said “missions intended …” For me, the appalling one involving the bull doesn’t count. (I refused to do it too , BTW)

Dislike: There Are Too Many Road Encounters!

Weirdly, while animal encounters are reduced, road encounters have shot right through the roof! Into the mountains even, if I dare say.

I’m there about seven to eight hours into the game at this moment, and I have not managed more than ten seconds of driving without being shot at or rammed. This has gotten so bad I now avoid driving as well as walking on roads.

Is this the game’s way of compensating for lesser animals? Or is it trying to force players to explore the wilderness? Whatever the reason, it’s a pain in the behind, particularly when you run into such encounters in the middle of a quest. (For example, a tailing one) Fingers crossed that the encounter rate would be adjusted in patches and fixes.

I’ve never understood why Ubisoft doesn’t include consumable food in Far Cry. More so than figurines, military apparel, etc, food add to the feel and sense of a place?

Imagine being able to drink from a coconut in Rook Island. Or have a dal in Kyrat.

It might sound juvenile. After all, you don’t actually eat anything. Not even smell it. But, if you’ve ever played games like the Yakuza series, you’d know what I mean. How the mere sight of local delicacies on (virtual) sale immediately completes the illusion of being somewhere.

On top of which, wouldn’t this also be a great partnership opportunity for Ubisoft? A triple win-win-win for gamer, developer, and advertiser? Strangely, this opportunity is still languishing beside the road!

Is there anything you love or hate about the new Far Cry 5 open world? Please comment!

Check out my review of the older Far Cry open worlds too!

Read my other game posts. 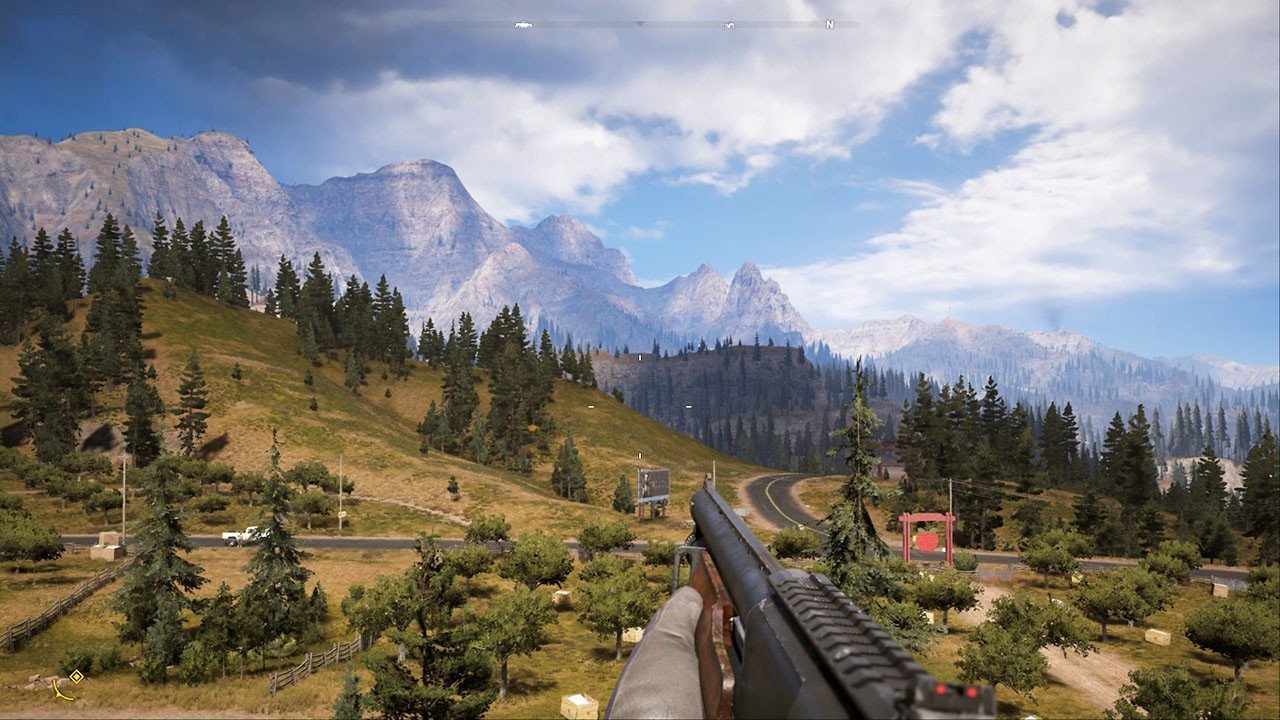