An evening of photography and leisurely strolling at i Light Marina Bay 2018.

If you have been reading my Diary category, I’m sure you would have gotten the impression Singapore is obsessed with light-ups.

Well, yeah, we adore light-ups. To the extent, ethnic festive opportunities for them are no longer enough, and so we created other events for them. By the latter, I’m of course referring to the Night Festival, the recent Civic District Light to Night Fest, and so on.

On the flip side, environmentalists are probably aghast at our fixation with colourful electric lights, with that itself the main reason for i Light Marina Bay. (By my interpretation, anyway).

Promoted as “a showcase of light art installations” by Singaporean and international artists, with all designs using energy-saving lights and environmentally friendly materials, the event highlights Marina Bay’s commitment to being a sustainable precinct. The festival also has a secondary objective of encouraging visitors to adopt “sustainable habits” in daily life.

With the venue at the very heart of downtown, it’s, of course, also a major tourism event. Part of the multi-year endeavours to spice up the waterfront area too. For us Singaporeans, I guess it’s yet another breezy evening event to look forward to outside of ethnic festivals. One that provides for great photos as well.

Having been “trained” as recently as January, I now know better than to just head to the festival and wander blindly, or to only refer to a (free[!]) map when there.

After consulting the official website, I decided to aim for one full circuit of Marina Bay over three to four hours, with the starting point being Esplanade Park. This would be a sensible starting point given several light art installations are on display there.

My original plan was to backtrack to the Theatres after Esplanade Park, then make my way down to Marina Bay Sands. After seeing the cows, though, I decided I ought to do it the other way i.e. proceed in the direction of Collyer Quay instead.

This abrupt change in plan was thanks to Illumaphonium, the sole installation at Pod @ Singapore River. While strolling through Esplanade Park, I was deeply seduced by the hypnotic sounds emanating from it. Later on, a minute of fooling around with the chimes made me decide right away this would be my favourite light art installation for the evening too.

I suppose the concept just deeply appealed to the amateur musician in me.

Good ol’ Merlion received its own makeover for i Light Marina Bay 2018. He was a little hard to photograph, though, with so many tourists about. I had to be (shamefully) aggressive before I could secure a vantage spot.

GastroBeats @ i Light Marina Bay was located at The Promontory i.e. within the still ongoing Prudential Marina Bay Carnival. This was a great arrangement for me, for despite what I wrote last December, I never again explored the carnival after that one visit.

At the same time, I felt having programmes within a carnival fairground infused i Light Marina Bay 2018 with festive variety. After seeing several installations solemnly standing by themselves in public spaces, it was refreshing to walk into a lively carnival. I also took the chance to have a break and a snack at the food section of the carnival.

(My feature pic right up above is Passage by Serge Maheu. Near to Light Play and Octopoda, it was full of excited selfie-takers)


After a brief stop at the Illumi Bar, I ended the evening at the ArtScience Museum. The installation here reminded me a little of the one at NSM during the Night Festival, and in short, I quite enjoyed the techno-organic theme and music. (I watched it twice)

Also, the epilogue of the projection felt reminiscent of a certain scene in Silpheed. If you’ve ever played this retro shooter, you’d know what I mean. 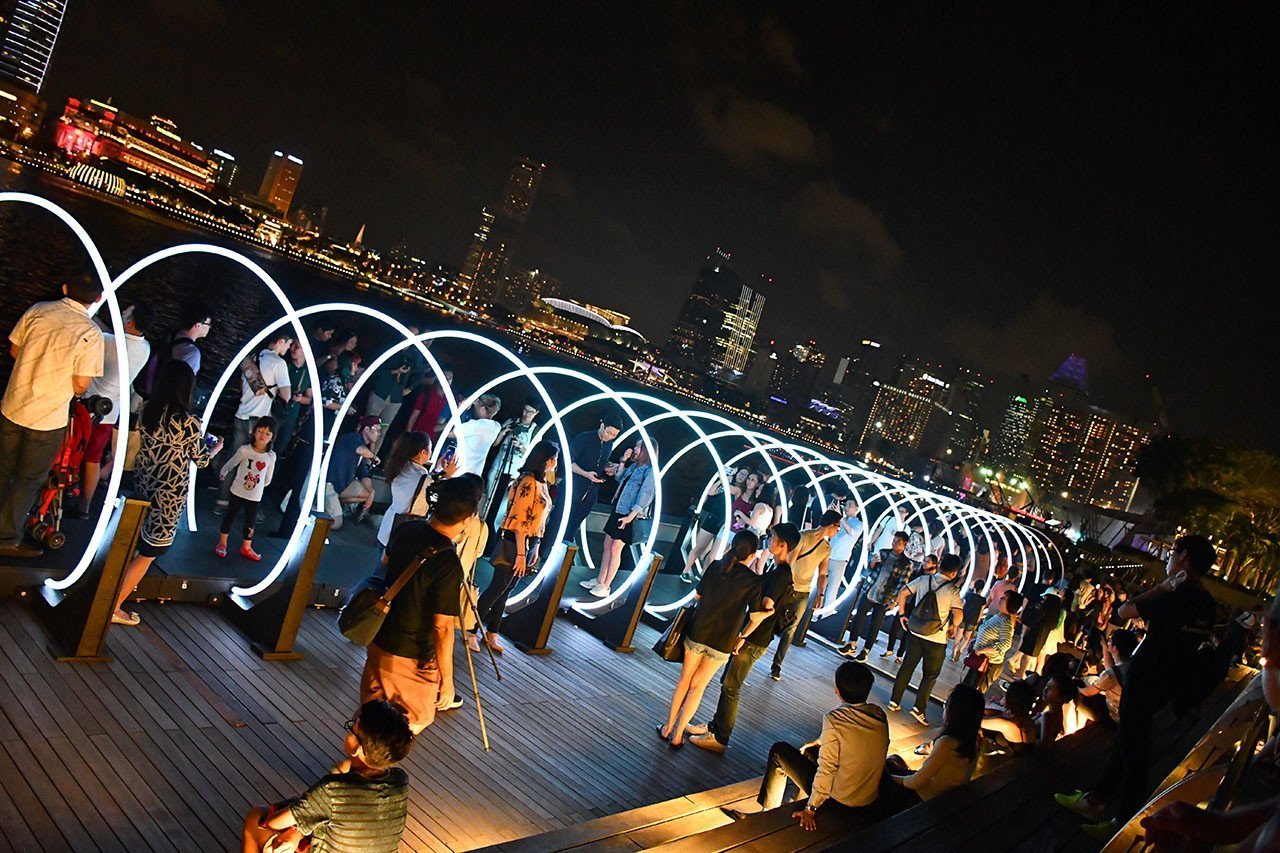