Let me get this out of the way first. I have neither been reading the wrong stories nor looking at my maps upside-down. I know Dracula hails from Transylvania, which is at the eastern end of Europe. Not the west where Madrid is.

Within Castlevania: Lords of Shadow 2, there’s also no indication that the decaying city the game is situated in is Madrid. Certainly no recognisable Spanish landmarks or NPCs too.

In fact, during my earliest runs, I sort of concluded “Castlevania City” was London. This probably had to do with how Dracula occasionally, erm, slips into Scottish English, and how wet the city is. I readily assumed everything was inspired by the British capital. This made sense to me given half of the original Dracula novel was situated in England.

But, Castlevania City is indeed based on Madrid, and I’m not saying so just because developer MercurySteam and composer Óscar Araujo are from Spain.

Executive producer Dave Cox and Studio Head Enric Alvarez both mentioned Madrid when asked about the inspiration behind their virtual city. Specifically, Cox shared how amazed he was by the eclectic architecture of Madrid, the way “crazy architecture” stood right next to modern buildings.

Now, to be honest, I think they were being romantic. Most large European capitals do contain an astonishing variety of architectural styles. But none that I’ve been to are as weird as the one in the game.

With this in mind, is Castlevania: Lords of Shadow 2 a good title for a virtual tour of the Spanish capital? Let’s take a look!

I could go on forever with this if I’m not careful, given the complexity of the Lords of Shadow story. So please excuse me for being as terse as possible.

Sometime after his full transformation into the Prince of Darkness, Dracula was mysteriously incapacitated. A thousand years later, he awakes severely weakened in a cathedral and learns that a city has been built atop his castle. Worse, his old enemy Zobak also informs him that Satan, whom Dracula defeated in LOS1, would soon return.


Zobak then proposes a deal. Should Dracula successfully vanquish the acolytes working to resurrect Satan, he would receive his old weapon the Vampire Killer as reward. As Zobak expected, Dracula then readily agrees to the bargain. The holy artefact is the one temptation the Prince of Darkness cannot resist.

Why is that so? Because the Vampire Killer is the only weapon capable of killing the master vampire. After centuries of dark existence, Dracula is hungry, if not desperate, for eternal rest. In other words, Dracula wants his old weapon back to commit suicide with.

How Great is Castlevania: Lords of Shadow 2 for Video Game Tourists?

As a major capital of Western Europe and the soul of a nation famed for design and the arts, Madrid needs no elaborate introduction. Thus, I’m just going to share a few images .

To share, I had the pleasure of visiting Madrid in May 2014, right after playing Lords of Shadow 2. Naturally, I was doing the usual video game tourist stuffs and on the lookout for Castlevania moments all the time.

The final picture was taken from the rooftop balcony of my hotel in downtown Madrid. Without me asking, the wonderful staff upgraded my room to a rooftop unit, one that had an open-air terrace as large as the sleeping and bathing area combined.

It was while having supper at the balcony, under the stars, that I finally had a proper “Lords of Shadow” moment. Can you imagine an immortal vampire roaming these rooftops or sulking atop a spire? I can and I did.


Ambience in the Game

All game screenshots belong to Konami.

Because of the story, it is unrealistic to expect Castlevania City to completely resemble Madrid in ambience and feel. Most related moments are therefore restricted to backdrops and architectural skylines.

Here’s the truth. Right up to starting work on this post, I didn’t feel the LOS2 team did a great job in replicating the feel of Madrid in the game. Of course, they weren’t exactly striving to do so, but from interviews, I think it’s reasonable to say they were to some extent aiming to capture the uniqueness of Madrid architecture in the game. It was the foundation of their open-world conceptualisation.

After re-exploring Castlevania City for this write-up, though, I began to see how elements of Madrid pop up every so often throughout the districts. The most obvious being in the Downtown district.

Outside of that, many zones also contain distinctive European city design styles. Art Nouveau, Modernism, Gothic, etc. Of note, the MercurySteam developers did mention other cities during interviews. For example, Budapest and Cologne. Castlevania City might not be Madrid overall. But it is certainly a believable modern European city. 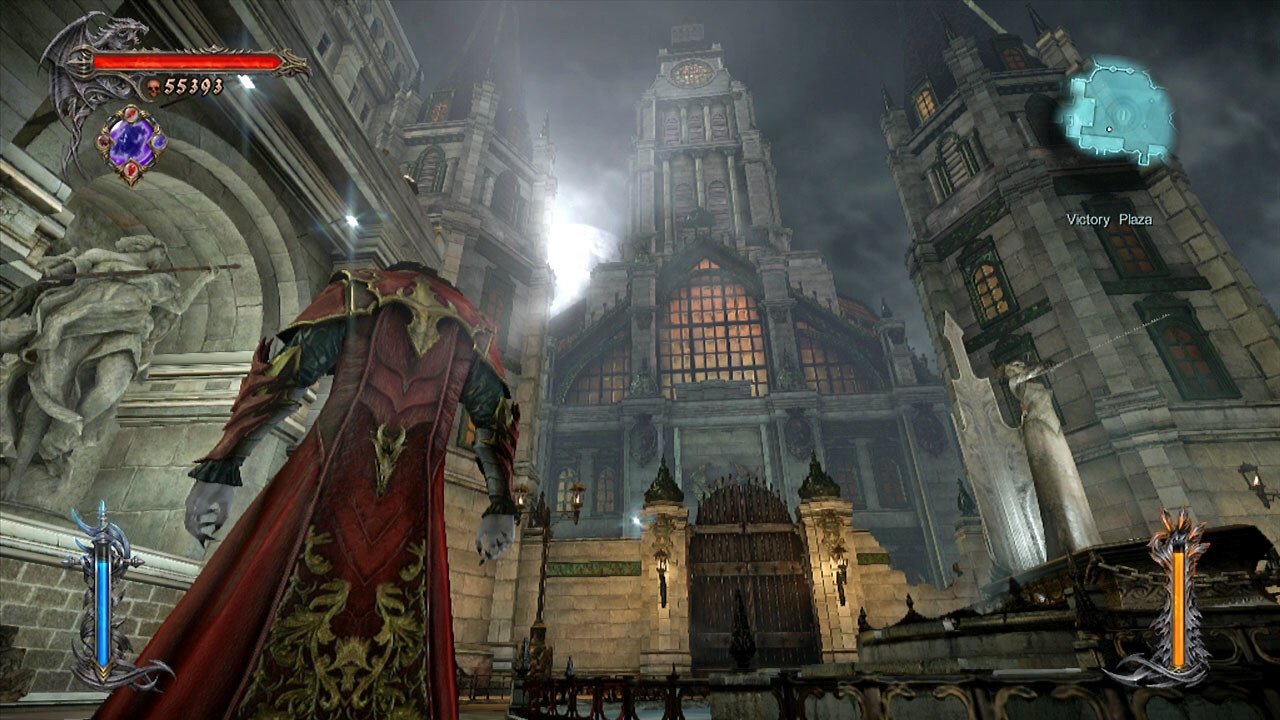