It’s been a colourful week online! Thanks to two social influencers scandals.
(I obsessed over both for days, so I wouldn’t be writing any random thoughts post this week)

For the benefit of those who do not already know, Singaporeans were treated to two juicy social media scandals this week. Both cases, without surprise, involved social influencers.

The first was that of a certain frozen dessert shop in town reacting most vehemently to an online review. The second was far more solemn and appalling. A popular Singaporean performer was accused of sexual harassment, Harvey Weinstein style.

Links to the respective stories, so that I don’t have to elaborate further.

We said we WILL sue. Nah!

We are sorry! Really!

Eden asked me wear G-String and call him daddy!

I never said anything ‘cos I scared!

He also did that to me, you know …

By the way, I said both scandals involved social influencers because the owner of the frozen dessert store is said to be one.

Anyway, comments! Oh, do I have so much to say about both scandals and all the personalities involved! But … I’d be decent and try to be cordial.

I’d summarise by saying, I feel there’s much more involved than just one bad review in the case of the frozen dessert store. As for the sexual harassment one, I believe this would leave a dark mark on Singaporean society for a long time.

About the frozen dessert store. While the owner/managers have shown themselves to be quite clueless about business PR, it still baffles me as to why they responded to ONE online review so strongly. Businesses are flooded with negative online reviews, fair or unfair, true or fake, on a daily basis. That practically all such businesses manage to continue operating, isn’t it proof that reviews are not omnipotent, especially when it’s just ONE review?

And given how heavily said store relies on online marketing, that its poster boys and girls are all, erm, social influencers of sorts, I would have thought they’d understand this better than the rest of us. On top of knowing better than to respond so vehemently.

Vehemence that include liberally redefining the meaning of the word “threat,” and insisting on the new definition. Vehemence that also includes slapping legal terms around like a stinky wet towel.

Could it be the case then that they are not reacting to the review, but something else?

Some sort of, I don’t know, previous bad blood?

Someone on Facebook commented the whole thing is like a meow-meow fight between little girls. (Known as mei mei in SG). As everyone knows, meow-meow fights i.e. catfights always involve all sorts of deliciously undisclosed feuds and vendettas. Is this what’s happening here? How many pages would this case fill if presented as a social media marketing case study!

On the Eden Ang scandal, juicy as the details are, I feel this bear grave consequences for all of us in Singapore.

Grave consequences not because of the likelihood that many Harvey Weinsteins exist among us. Or that that any of us could be liberally accused of such sexual harassment, and achieve nationwide notoriety overnight, as long as popular social media personalities are the ones who spilled the beans.

It’s because the police’s reputation got smeared during the accusations.

Put it this way. You bet your most expensive thong that the police is not going to forgive this slight. Their boss, the government, is even more unlikely to let this pass, especially with their current crusade against fake news. The fallout of this incident is thus the extreme possibility that the government would soon enact various regulations to prevent recurrences. For the common Singaporean, what is this going to translate into? What kind of new laws targeting social media are we going to get?

Would there soon be a law requiring people with a certain degree of social media influence to be REGISTERED? An agency for this purpose established overnight?

Would registration also involve some sort of hefty monetary deposit? Or complex paperwork? The requirements for endorsement, guarantors, what have you?

The possibilities are terrifying. But you can’t blame the government. Because they were indeed victimised by Dee Kosh’s initial broadcast.

From a broader perspective, there’s also the damage to the #metoo campaign that this affair claims to be part of. For the record, I’m not against women speaking up against sexual harassment. In fact, I feel there should be some sort of special police outlet specifically for the reporting of such crimes. Given the revelations about Lilith*, the first victim, would (Singaporean) men accused of sexual harassment soon be energetically citing Eden Ang’s case as an example of how such accusations should not be trusted? Would Lilith end up being the poster girl for their defence?

And so it’s terrible news for all of us, male or female. All because of one irresponsible rant by a social personality. Coupled with the ugliness of the frozen dessert store nonsense, no wonder some Singaporeans are now calling such personalities social “influenzas.” I seriously hope the people involved in both incidences give a think to what they are doing, before they find their entire industry, and themselves, avoided like real sickness.

* Okay. I can’t resist. A girl who named herself after the mythological Queen of the Succubi claiming sexual harassment. Hmm.

I’m compelled to post something about the latest social influencer scandal as of June 2018. That of Instagram social influencer and photographer Daryl Aiden Yow caught plagiarising stock photos and misrepresenting himself.

I feel the compulsion because I’ve been a stock photographer for ten years, albeit not a terribly successful one. What Yow did is thereabout the most reviled, despicable, and notorious act in the industry. The most feared one too. What every stock photographer, successful or not, groan to even think of.

His audacity aside, I think what’s most appalling was Yow’s so-called apology in the face of massive online backlash.

Oh it’s an apology all right, he slathered his response with all the appropriate words. Yet, within the very same post, he began by stating how he originally intended to keep mum, but decided not to because his collaborators i.e. other social influencers he had worked with were being attacked/questioned.

After a few words of contrition, he also went on to rant about he gave his all to his projects i.e. he didn’t “cheat” while doing those jobs. The unspoken implication behind this being, of course, that he didn’t short-changed the organisations that hired him. In spite of what he did earlier.

Is this genuine remorse? Perhaps my opinion is clouded by the fact I’m in the group he exploited, but Yow’s apology felt more to be a defensive retort more than anything else. I wonder how many Singaporeans felt so too.

Let me add too that equally disturbing are the statements of his defenders, such as instagrammers who left comments similar to Yow’s apology on his account.

For example, Yow’s frequent collaborator Andrea Chong dodged questions and claimed she would refer these to her “legal team.” What legal team? Is she suggesting it’s potentially libellous to question her on the matter? She’s absurd.

The short of it, I think many social influencers don’t quite realise the only thing new about their industry is that it primarily operates on an online medium. That’s all. Everything else about business and business ethics applies. In time to come, perhaps very soon, the same laws and regulations would apply too.

When that happens, admirably doing a job you lied to obtain will not legally exonerate you. Not being vigilant about your collaborators will surely result in you being dragged through the mud too when shit hits the fan. And going bratty over it will only make things worse.

There’s a lot of learning and reflection that must happen in this “new” industry. Big question now is, would it doom the industry before social influencers grit their teeth and learn? 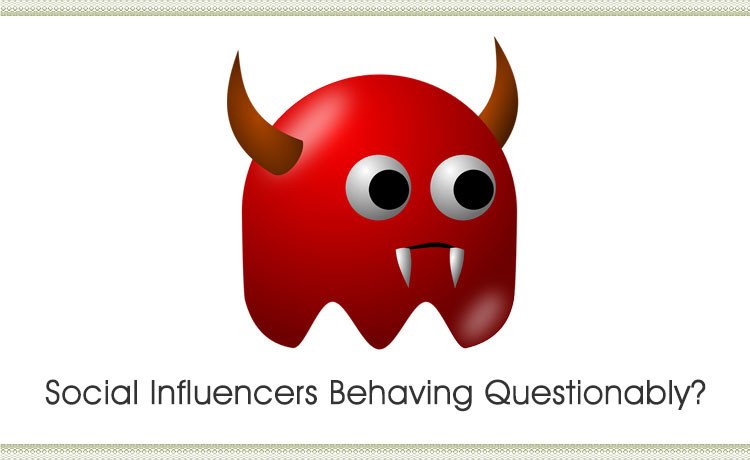