I’ve been looking forward to this since the beginning of the year. Firstly, because I enjoyed last year’s Night Festival. Secondly, because I visited an associated exhibition on New Year’s Eve, before I went to wait in the rain for fireworks, and want to use the pictures from that evening to do a combined post.

To quote from the event brochure, this year’s Light to Night festival is a series of programmes across major cultural institutions and open spaces in Singapore’s civic district, all based on the theme of colour. For me, I began my evening at National Gallery Singapore, that is, Zone A of the festival. Of note, this latest “festival” is far more comfortable to navigate compared to the previous Night Festival. The major locations and performance venues are much, much closer together.

This special exhibition of Impressionist art is listed as one of the highlights of Light to Night 2018, but it has actually been ongoing since November 16 last year.

As I mentioned above, I visited on New Year’s Eve and snapped over 1gig of images. Overall, I found Century of Light to be a terse introduction to one of the most important revolutions in western art, with representative pieces by many big names of the movement. What’s doubly worth seeing is the special showcasing of masterpieces by Southeast Asian artists Raden Saleh and Juan Luna. I confess to being utterly ignorant of these two regional masters. Their unique styles certainly caught my eye.

Other Zones and Performances of Light to Night Festival 2018

See the word “game” on the Corinthian columns? There was indeed a game going on. One in which players stomp on a platform to fill up gauges displayed on the façade. I was … really keen to have a go. But there were too many squealing kids in the queues!

By the way I had an interesting half-hour at the Arts House.

The moment I stepped onto the second floor, a lady earnestly invited me to attend A Novel Idea, a dramatized reading performance of 1984. This was my first attendance of a reading in like, 20 ++ years, and all in all, I have to say it was very enjoyable. (The two readers were really good). The unusual thing about the reading is also that the audience gets to decide which novel to be read from. I entered too late to partake in the voting, but I likely would have also voted for 1984, out of the three choices of that, The Great Gatsby, and Frankenstein.

Was in the vicinity again, so took the opportunity to snap more pictures and to visit the zones I skipped the other evening.

This payable attraction (SGD 2.00) is like those mirror mazes you see in movies and games, and I confess it creeped me out a little. It was quite deserted when I entered at six, and with the mirrors utterly spotless, I kept walking into cul-de-sacs and myself! Had I entered after dark, I suspect it would have been even more … atmospheric.

BTW, I was also strongly reminded of that episode from Gotham Season 3. You know, the one with teen Batman confronting teen Joker?

I neglected to mention in the main post that these projections are titled “Art Skins on Monuments” and they are by Brandon Tay X Safuan Johari. The ones for the City Hall Wing of the Gallery, see below, is titled Chromascope and it’s by Spinifex Group. 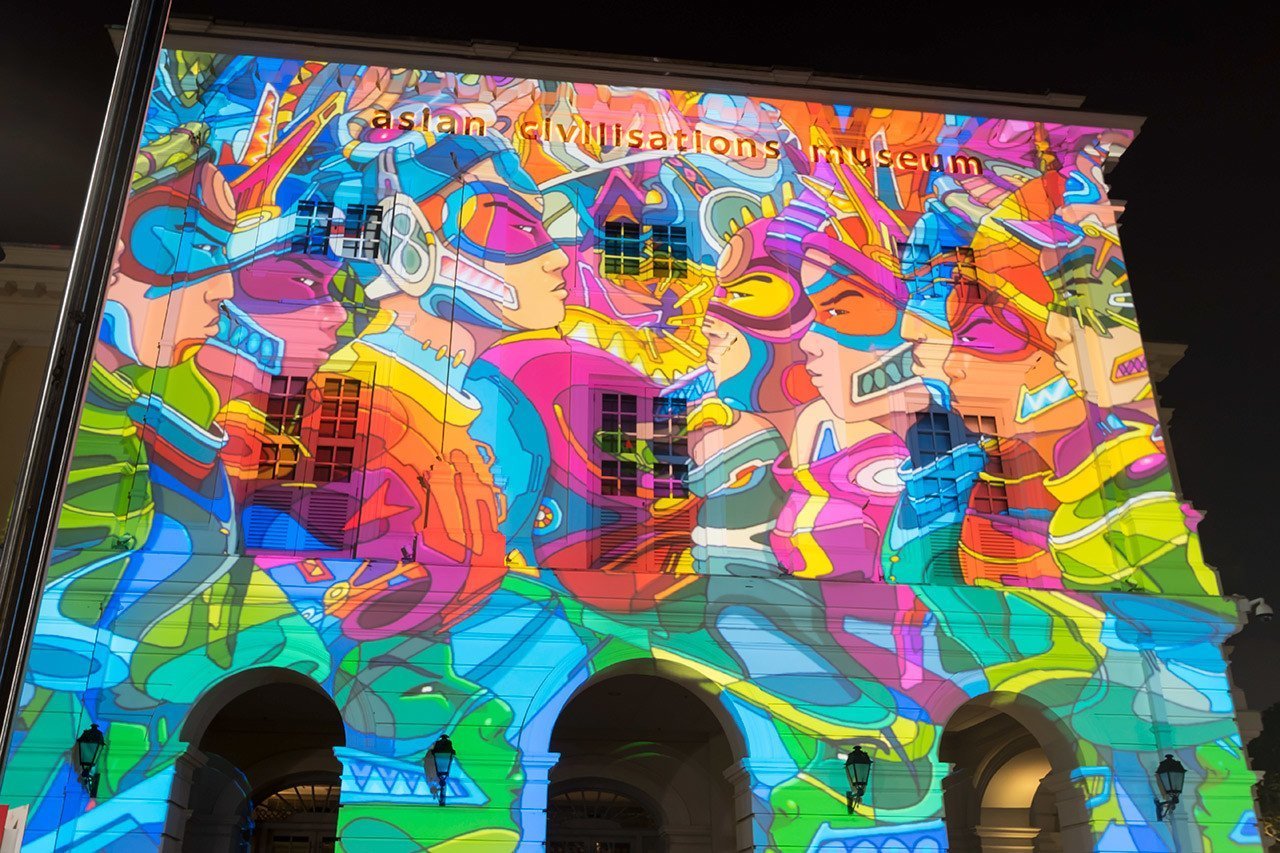