Has Onomichi (尾道) been featured in a video game? If not, that’s yet another reason to check out its appearance in Ryū ga Gotoku 6.

Like I’ve mentioned in several posts, Sega’s Ryū ga Gotoku series is world-famous for its realistic and meticulous virtual renderings of Japanese cities. Perhaps because of this, Sega decided to attempt something markedly different for the series epilogue.

Rather than showcase Osaka again, or Fukuoka, or Nagoya or Sapporo, rather than “do” yet another nightlife district, Sega picked the idyllic sea town of Onomichi as the alternate play site.

How did they fare? Is Sega as competent with countryside ambience as they are with neon-lit faux paradises? Let’s take a look!

I could go on forever here, given there were five episodes and one prequel before R6. But to keep the story short, Ryū ga Gotoku 6 – The Song of Life features veteran yakuza Kiryu Kazuma at the sunset of his (illustrious) career. While still venerated by both the authorities and the underworld, he’s mostly considered a has-been by everyone. Respected, but nonetheless also disregarded.

Kiryu himself is happy to keep it this way. Players familiar with the series will know he has long dreamed of leaving the underworld.

Unfortunately, as always, things do not go smoothly for Kiryu-san. Three years after imprisonment for the events of episode 5, Kiryu returns to Okinawa to discover Haruka has gone missing. Worse, he then suffers the worst shock any father or foster father could possibly have: Haruka has given birth to a boy but no one has a clue as to who the father is.

To unearth the identity of the baby’s father, Kiryu heads to the seaside town of Onomichi to investigate. There, Kiryu once again becomes embroiled in the conflicts of the underworld. This time, there’s possibly no survivable end for him too.

How Great is Ryū ga Gotoku 6 – The Song of Life for Video Game Tourists?

Before all else, real-life references! For those of you who are unfamiliar, Onomichi is a seaside temple town in Hiroshima Prefecture. Unlike how it’s depicted in the game, the town is not completely a backwater. Onomichi has a Shinkansen train station.

Nonetheless, the town is often overlooked by international travellers, in great part because it’s overshadowed by nearby Hiroshima City and Miyajima Island. In fact, I dare say tourists who visit are mostly those attempting the Shimanami Kaido cycling route, or those with a deep fascination with Japanese temples and literature.


The situation could be different within Japanese domestic tourism, though; I confess I’m not completely sure here. In 2016, Onomichi was featured as an “escape-to” destination of sorts in the rom-com A Girl and Three Sweethearts. Any Japanese guide on the Chugoku region would definitely have a major section on the town too.

On these, my guess is that Onomichi is one of those “undiscovered” Japanese towns that have yet to hit international radars big time. My other guess is that given its splendid location, atmospheric narrow alleys, and superb historical temples, it would soon be a regular feature on many top-10 travel lists too.

I don’t know about you, but small towns seldom immediately impress me.

Invariably, their charm takes quite a while to hit. This usually also happens not while I’m working my way through their tourist attractions, but when I’m strolling down their streets.

Which was the case with Sega’s Onomichi. Visually complex as it is, virtual Onomichi initially felt sleepy, especially in comparison to dazzling Kamurocho. Once I worked my way through the game chapters, though, I started to appreciate the sedated alleyways and quiet slopes. (They felt peaceful, to risk a cliché)

As for authenticity, Sega designed Onomichi very much the same way as they did for Kamurocho i.e. Kabukicho. There are certain areas that are remarkably similar to their real-life counterparts. On the other hand, the entire area is also condensed to facilitate gameplay. A quick comparison with Google Maps immediately reveals the latter.

Onomichi’s main gifts to the Japanese travel industry are its many hillside temples, which in real-life could be visited on an extended temple walk. Within the game, however, only one is featured. This being the atmospheric Senkoji Complex.

TBH, I would have personally preferred more temples in the game. But when it comes to what was done for Senkoji, I have to say it’s superb.

I mean, this is truly one area of Ryū ga Gotoku 6 that was conceptualised with virtual tourism in mind. Not only are there no annoying enemy encounters, there are several scenic spots perfect for experimentation with the in-game selfie function. These areas even come with random pedestrians and moving cable cars to complete that touristy feel.

As expected, Sega included various mini-games and side quests within Onomichi to sustain open-world gaming feel. All of these are also appropriately designed to suit a small town. In other words, no sexy things or big city adventures here.

Which, in turn, is the main problem I have with this virtual version of Onomichi.


I’m a city guy, you see. And so I love bright lights and tall buildings and loud things. The mini-games Sega threw into its Onomichi are just too … serene for me? You know what I mean? Apart from the fishing adventure, I found the others much too slow-moving.

Being utterly clueless about baseball, I was also completely baffled by the complex baseball manager game.

You might find the experience different, though, especially if you prefer to take things slow or happen to be a huge baseball fan. What I’m saying is, Sega’s Onomichi is one of those picturesque small towns I wouldn’t mind spending an actual day sightseeing in. But I certainly wouldn’t be staying the night.

Have a vacation in Onomichi with Ryū ga Gotoku 6! today!
Here’s another take on the Onomichi Sights in Yakuza 6.


And what you can learn from this gangland series. 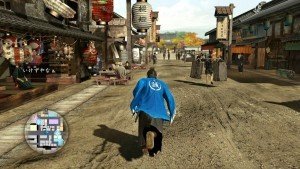 Check out my post on Ryū ga Gotoku Ishin! too!