Sega’s hallmark series has long been beloved for its meticulous virtual reconstructions of modern Japan. How does it fare with its historical spinoff, Ryū ga Gotoku Ishin?
(Updated February 2019 with new Kyoto pictures and section on Mibu!)

The sights, the sounds, the incredibly detailed if romanticised virtual reconstruction of Fushimi downtown!

After buying the game, I expectedly spent way more time playing the mini-games and completing substories than progressing through the main quest, which, by the way, is what usually happens with me with Yakuzas titles.

For video game tourists, just how great is Ishin when it comes to experiencing pre-modern Kyoto? Apart from historical references, does Yakuza Ishin offer a genuine taste of a pre-modern journey in Japan?

Ryū ga Gotoku Ishin! is based on the story of Sakamoto Ryōma, one of Japan’s most famous and beloved revolutionists.

Born into a family of low-ranking samurais in Tosa (modern-day southern Shikoku), Ryōma achieved recognition as a master swordsman in his youth after extensive training in Edo. Subsequently, he became embroiled in politics in the 1860s after his friend Takechi Hanpeita organised the Kinnoto, a revolutionist party seeking to overthrow the then-ruling Tokugawa Shogunate.

Ryōma’s youth additionally coincided with the “black ships” arrival of American Commodore Matthew C. Perry. This was the key incident that forced medieval Japan to open its doors to the West, with resulting upheaval within Japan then directly responsible for the downfall of the 300-year-old Tokugawa Shogunate. Historically, it is said that a burning desire for Japan to never again suffer such humiliation was what pushed Ryōma to become a revolutionist.

Coming back to the game, Ishin’s story largely follows the major events of Ryōma’s life, with notable twists. Foremost among all is that key characters are portrayed by popular figures of the Ryū ga Gotoku series. Kiryu Kazuma plays Ryōma, “mad dog” Majima plays legendary swordsman Okita Sōji, and so on

The story itself is also embellished with an additional plot, one that respects historically “known” events but depicts them in a stunningly different way.


On this, I confess I was initially quite confused and put-off by the story direction. (Sakamoto Ryōma assuming a double identity as Saito Hajime, feared enforcer of the Shogunate?) Luckily, the entire saga was well-crafted enough to be coherent and immersive in the end. With many unforgettable moments too.

For players into Wuxia fiction, this revised life of Sakamoto Ryōma has a strong Gu Long flavour to it too. Permeating every chapter are classic Gu Long storytelling elements such as an overpowering compulsion for vengeance, thickly layered conspiracies, and dark secrets for everyone. If you like imaginative retellings of history, you’d probably love the Ryū ga Gotoku Ishin story.As well as find the whole game worth playing.

Before all else, real-life Japanese photos of Kyoto and surrounding attractions!

I’d give Ishin full marks in this area. Like other Ryū ga Gotoku titles, especially the PS4 ones, Sega went to exceedingly lengths to reproduce the feel and flavour of 19th century Japan.

The developing team obviously also had the intention of showcasing famous landmarks of Heian-kyō (Kyoto), with several key events happening at these locations. Needless to say, each play area is accompanied by appropriate ambient sounds too. What completes a market scene better than the distant call of a shopkeeper, or the chatter of kimono-clad pedestrians?

Personally, I feel Ryū ga Gotoku games are great for video game tourists because each title contains a wealth of minigames and experiences that are so utterly Japanese in taste.

Ryū ga Gotoku Ishin! is no exception, with signature Ryū minigames like karaoke and hostess-visiting all making appearances.

The above said, I do have to highlight some of the games and associated locations are a tad too modern to be realistic. (Actually, most locations veer towards being too modern i.e. imaginative) Nonetheless, with some suspension of belief, one can still get into the appropriate mood. Just try not to be too historically prudish.

As mentioned, Ishin’s story respects and reproduces several historical events of Sakamoto Ryōma’s life. Associated organisations and characters like the Shinsengumi and the final Tokugawa Shogun appear throughout the game.

In addition to which are the cameos. For example, Natsume Sōseki, Japan’s greatest modern-era writer, has extensive interactions with Ryōma. Commodore Perry himself makes a comical appearance in the middle chapters. Even Tom Cruise reprises his Last Samurai role, sort of, in an extended substory.

These add to the historical feel of Ryū ga Gotoku Ishin! Which I feel is very important for an authentic experience. But, like what I highlighted in the previous section, many of these do often veer towards being too unreal.

Again, you have to be quite open-minded to enjoy these Easter eggs. After all, history is only the inspiration in this game. It’s all about the action and the ambience.


By the way, Sōseki’s substory led to me (finally) reading Kokoro. See? Video games can encourage reading too!

Mibu is one of the main districts of Ryū ga Gotoku Ishin!, accessible from the western end of the Shijō stretch and the location of the Shinsengumi HQ.

When I visited Kyoto in November 2018, the neighbourhood was naturally high on my list of must-sees. Specifically, I wanted to check out Mibudera (壬生寺) and the Yagi Residence (八木邸), both of which are key Shinsengumi historical sites.

Confession time. In short, I didn’t enjoy my afternoon trip as I made a huge mistake. (Which you must avoid if you are visiting these sites in the afternoon)

What I’m saying is, do it the other way around if you are going after 3 pm. Also, forget about the interior of Yagi Residence if you don’t understand Japanese.

Give yourself a holiday in pre-modern Kyoto by getting a copy of Ryū ga Gotoku Ishin! today! If language is an issue, here’s the English guide.
Here’s another way to enjoy, I mean, learn from this gangland series.

Check out my post on visiting Onomichi with Ryū ga Gotoku 6 too! 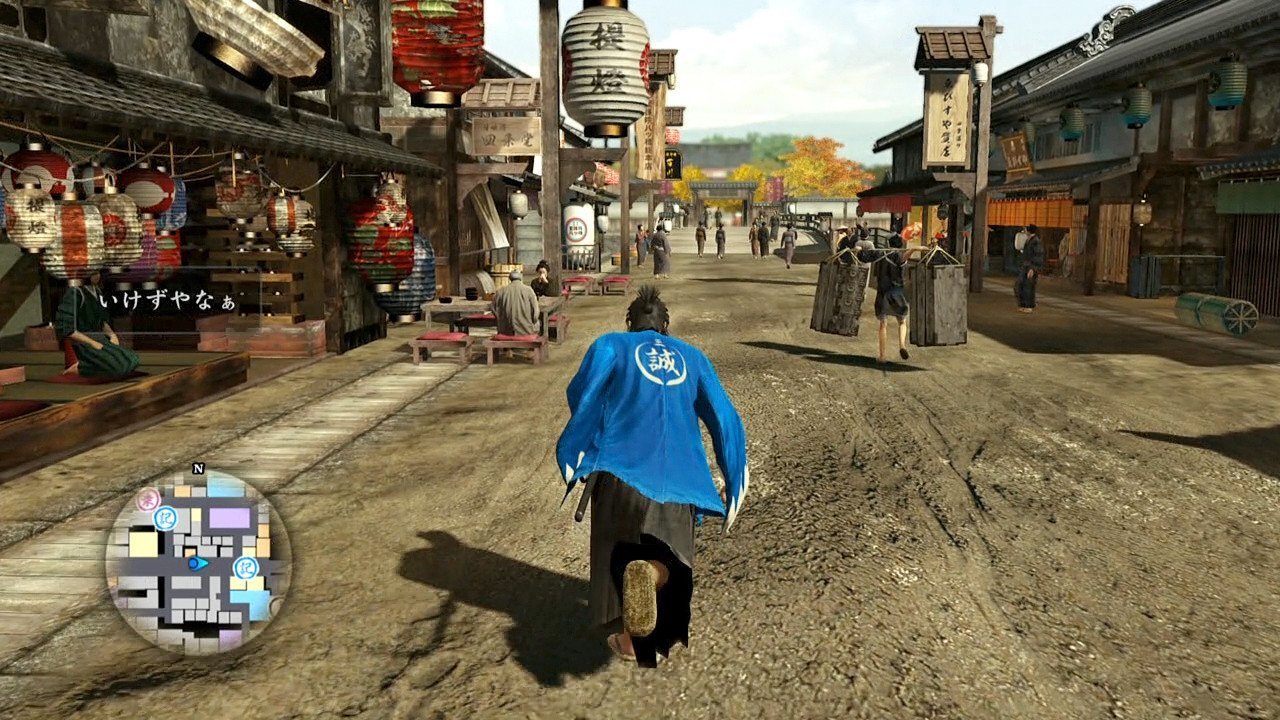