How SOME Singaporeans Are Worsening the MRT Breakdown Crisis

I believe Singapore has a realistic chance at containing the MRT breakdown crisis, when people stop spouting nonsense.

I’ve been doing happy posts. Time for an angry one.

We must be balanced in what we do, yes? Balanced diet, balanced lifestyle, balanced posting?

This is with regards to what happened in Singapore on Nov 15. i.e. the latest aggravation in the ongoing MRT breakdown crisis. Tons have already been written and posted online, so I’m not going to regurgitate details or opinions. Neither am I going to deliberate on the best way forward.

Instead, I’m going to complain and list down the ways some Singaporeans have contributed to today’s appalling situation.

Correction. It should be, how I FEEL some Singaporeans continue to contribute to the MRT breakdown crisis. One must be very careful because the same people often launch lynching operations or demand police intervention for sedition.

What I have to say involves specific words and phrases too. Accusations, sarcasm, disdain that have slapped about like hot smelly towels over the last ten years.

Now, I’m not saying there accusations are magical incantations that have supernaturally worsen the situation. What I’m saying is that these irresponsible, often derisive statements likely reinforced the so-called toxic culture within SMRT Corporation, a situation that is now the talk of the town and a parliament discussion.

When least damaging, these statements openly encouraged prolonged disregard of festering problems. At their worst, well, that’s why we are now getting floods and bumps in what was once, the pride of Singapore. Give it a think and I’m sure you’d agree.

1. “Singaporeans only know how to complain!”

This is the vilest statement any Singaporean could say about his fellow citizens. The most offensive and the most derisive.

It is so because it is a statement formed from a malicious determination not to differentiate between genuine grievances, feedback, and mischievous endeavour. To the ones fond of this accusation, anyone who grouches is a complaint king. Thus, the person must be scorned and brushed aside.

Even if the bulk of Singaporeans are indeed whiners, does it change the fact that MRT trains are breaking down several times a month? Even if all of us were to shut up, does it begin to remove all the track faults, signal faults, human faults, and what have you?

Besides, when people have to spend several hours a week trapped in crawling trains, when they have no assurance each workday over whether they would punctually reach their destinations, is it that wrong for them to grouch?

Or would these critics of Singaporeans prefer passengers to … take to the streets? As is the case in many other countries?

I think what’s happening here is this. The Singaporeans complaining about others complaining harbour a deep fantasy. One in which anyone can do anything in his or her job and never be accountable. Admittedly, it’s a very attractive fantasy, a very Dark Side kind of thing that’s seductive to anyone. One can even say it’s only human to occasionally toy with such reveries.

“Flood pumps never serviced for half a year? Aiya, what’s the big deal? People only …”

You know what I mean.

2. “Top Managers Are Seldom Hired For Their Technical Expertise

If (1) is the vilest, then this is the most insidious. It’s insidious because it takes limited truths and magnifies them to be the only truth explaining the MRT breakdown crisis.

Limited truths such as headhunting companies all emphasizing on managerial experience rather than related industry experience when searching for leaders. That bosses are not the ones holding the screwdrivers and hammers, and thus it’s unimportant for them to know the gritty “works.”

Or maybe I should say there’s no truth here at all, because do headhunting companies have unblemished records of perfect placements? Doesn’t the situation heavily depend on individuals, organisations, and situations?

In a smooth-running company where everyone is doing what they are supposed to do, it may indeed be the case that the boss need not know every technicality. He can comfortably focus on managing. On the other hand, if it’s a large one besieged by toxic culture for near a decade …

Unconvinced? Consider this. A certain corporation is not yet on the verge of collapse, but there’s certainly a lot of nonsense going on. A new manager is then assigned to salvage the situation. What would the guilty ones immediately do? What would they do before they consider audacious, maybe even borderline criminal endeavours?

Would these bad employees be … bullshitting day and night to the new manager to cover up their faults? Would much of the bullshit involve bombastic technical terms and claims?

In turn, what kind of manager would most likely be bamboozled? One who has led a larger but unrelated organisation i.e. he doesn’t even know, for sure, how things actually work in the one he’s now heading. Or one who at least knows how many parts of the process there are, because once upon a time, he used to be there on the ground.

I think the answer is obvious. By the way, I’ve not been clear. This point is with regards to people still defending the current head of SMRT as an ideal leadership choice.  Oh, the absurdity of it!

I jump the gun a little here. This statement is the hysterical response by some Singaporeans to calls for the top management of SMRT to (graciously) resign.

Particularly, that CEO. That ex-general.

I’m not too sure how to describe this response. Because it’s so nonsensical, yet in some ways, also so terrifying.

Are we saying that in our shimmering city-state of a few million people, and amidst all the accolades we regularly shower on ourselves, we don’t have other talented, capable people who could at least front the crisis better?

To the extent, we need to continue relying on the same people whom, after years on the job, openly lament the inability to remedy toxic company culture?

Who, seemingly, lack the ability to know better when subordinates under them have been cutting corners on important task for near a year?

If so, then I think the Singapore’s future is horrifically grim. MRT breakdown or not.

So grim we ought to just forget about the whole issue, and resign ourselves to walking to school and work every day. Wait, maybe we should all just stay at home, and rot.

4. “Let them stay on … It’s better than finding a fresh person as replacement …”

I’d be more forgiving about this one. Because I think the Singaporeans who mouth these are victims of wistful fantasy.

The fantasy that the MRT breakdown situation will improve if we keep pressing on with whatever we are doing, the way we have been doing it.

Knead the iron rod enough and it WILL eventually become a needle! Huzzah!

Which might happen. Unfortunately, I think the polar opposite is far more likely.

If you talk to anyone who has survived dramatic failure, chances are, they will all bemoan the same mistake. As in, foolishness over not biting the bullet before irreversible downfall.

Not doing the painful but necessary. Instead, wistfully hoping things would miraculously improve.

Pressing on with the same when it’s obvious that after years, it’s not working. Pressing on and on, and finding new excuses every week to continue doing so.

And, nope, “cutting away the lame” is not necessarily being vindictive, it is not punishment too. I’d be fair and agree that at various points, the current leaders of SMRT did feel committed to improvement and they did have results to display.

Yet, ultimately, it was all minor battle victories versus a long steady decline. Maybe the task was beyond them. Maybe their personalities were just ill-suited for the challenge.

Besides, could it also be possible that replacing the current leaders is actually, a blessing to them? I mean, who likes to be shamed online every day? With all sorts of caricatures? Do you?

Incredibly, there are still people defending the MRT breakdown crisis as inevitable. With “explanations” the likes of, the system is getting old, nothing is infallible, even humans fall sick … Etc.

I’d like to ask the Singaporeans who repeat these excuses ad nauseam the following questions:

Like (1), such dismissal encourages a blatant culture of denial. Over time, the culture becomes a plague that diminishes any effort to cure and improve.

Please! Enough of such garbage excuses! We have denied the severity of the situation for too long. That’s why languishing in a MRT breakdown is now almost as Singaporean an experience as national service or chicken rice!

We can work together to solve this crisis. I do believe we can. For those of us not within SMRT, let’s begin by not weaving the same moronic defences again and again for those responsible for the situation. Don’t forget, they are unlikely to be grateful. Most of these … leaders wouldn’t even know of your existence. 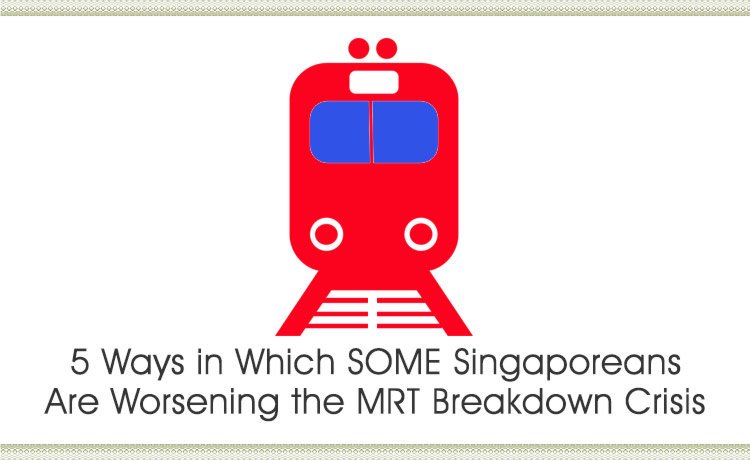