Victoria Peak photo taking. It is not as easy as it is in Sleeping Dogs! (Plus, I didn’t have an Amanda with me)


I begin with a confession. 🙂

I’m stretching things a little here to facilitate this post. Sleeping Dogs or not, I would still have visited Victoria Peak. I do so whenever I’m in Hong Kong.

To me, “The Peak” is hands-down the dreamiest and the most gorgeous attraction in the ex-colony. In a somewhat juvenile way, and as I’ve mentioned in my previous series on Sleeping Dogs, any visit to Victoria Peak is also particularly nostalgic for me. This was the first attraction I visited during my first trip to Hong Kong in 1991. Ten years later, I also had a very memorable dinner here with my dad.

Great! The intro’s out of the way. Back to this video game tourist post.

The Journey to Victoria Peak


Again, all screenshots from Sleeping Dogs belong to its creators.
And if you haven’t, check out part one of this series.


Thanks, or no thanks to my usual dilly-dally ways, I left my hotel too late; the sun was already setting before I was even near the MTR station. Concluding that it was quite unlikely that I’d reach the summit of the Peak before twilight is over, I decided to take it “easy” and enjoy the journey.

The following is a pic I took while strolling to Wan Chai MTR station. (And while avoiding other pedestrians. Hong Kong people walk really fast!) This is Gloucester Road, in the heart of the Wan Chai District.


Alighting at Central MTR Station, I followed the signs and soon found myself in Chater Garden. As I predicted, the sky was already dark by then. I thus decided not to waste the moment and spent ten minutes or so appreciating the financial spires of Central. The following being one of the shots I took.

Quite satisfied with my brief break, I continued upslope to the Peak Tram lower terminus station at Garden Road, and was quickly aghast. (Imagine me standing by the road with my earphones dropping away). The station was positively packed! I had expected there to be a queue but I hardly anticipated so many visitors.

It’s was like, I could barely see the entrance and the ticket office looked as if it was about to be stormed. It was at this point that a taxi so conveniently cruised to a sly halt beside me. Without a second thought, I hopped into it and barked my destination to the driver.

It was while ascending the steep slopes that I abruptly realised. Traditional route it might be, it would have been “wrong” for me to use the Peak Tram. The Sleeping Dogs way is to DRIVE up to the Peak. (Or in my case, be driven)

Dinner at Wildfire Pizzabar and Grill

Reaching the Peak fifteen minutes later, I sauntered out of The Peak Galleria, did my best not to smirk at the people queueing to leave the summit, and had my first breath-taking view of the evening. Following which I decided, the game can wait, so can photo taking. I needed to address the uprising in my stomach before I get replaced as Dragon Head.

Re-energised, I whipped out my tripod and proceeded to the observatory deck of the Peak Tower, formally known as Sky Terrace 428.

But some information about Sky Terrace 428, and the Peak Tower, before I show you my better pics from that hour. What’s there at the real Victoria Peak is quite different from what’s in Sleeping Dogs. Actually, I should say it’s starkly different, be it the shape of the Peak Tower, the number of buildings surrounding it, or the route to the observatory area.

There’s no guide to bribe to open a gate to get to the observatory too. No, no! In real life, you tap your Octopus smartcard or buy a ticket, then take an escalator. Furthermore, Sky Terrace 428 itself, thank goodness, is not fenced up too. What a photography nightmare it would have been, had that been the case.

As you can see, other differences are immediately obvious upon comparison.

The real Victoria Peak is much higher than the one in Sleeping Dogs. Much further away too. What’s viewable from even the worst spots is also far more complex and dramatic than the scene in the game.

I’m not dissing the game graphics here, though. Given the incredible complexity of the actual scene, I think it would have been foolish had United Front faithfully reproduced the scene; too few of us would be able to run the game.

As simplified as it might be, the visuals in the game do overall give an idea of what’s available at Victoria Peak. If anything, it probably inspired gamers to visit the Peak or visit again. It certainly did that to me.

The Peak Tower and Peak Galleria

Done with picture taking, and knowing deep down that I didn’t quite get the shots I want, I continued with exploring the rest of Victoria Peak. At this point, I must say the whole Sleeping Dogs feel for the evening was rather gone. Luckily, there were the dreamy tracks from Softly station on my phone to uplift me. With the crowds largely gone, it was also quite pleasant strolling about the shops.

My GREATEST discovery that evening. The most atmospheric smoking point in Hong Kong!

(Basement, bros and sis. Lowest basement toilet is next to heaven.)

In short, game and real-life are quite different. It would have been nice to have such a fountain at the actual Peak too.

Final Adventure of the Evening

I left the Peak slightly after ten. With the worst of the tourist hordes gone, I was able to quickly board the tram for the journey down.

Now, this was my first time ever taking the tram downhill. For all previous visits, I took the tram up and left by taxi.

GOOD LORD, the ride down could give those at Ocean Park a run for the money! It’s like riding a reverse roller coaster – the most alarming part being the segment near May Road Station where surrounding buildings were all deliriously at 45 degrees inclination! 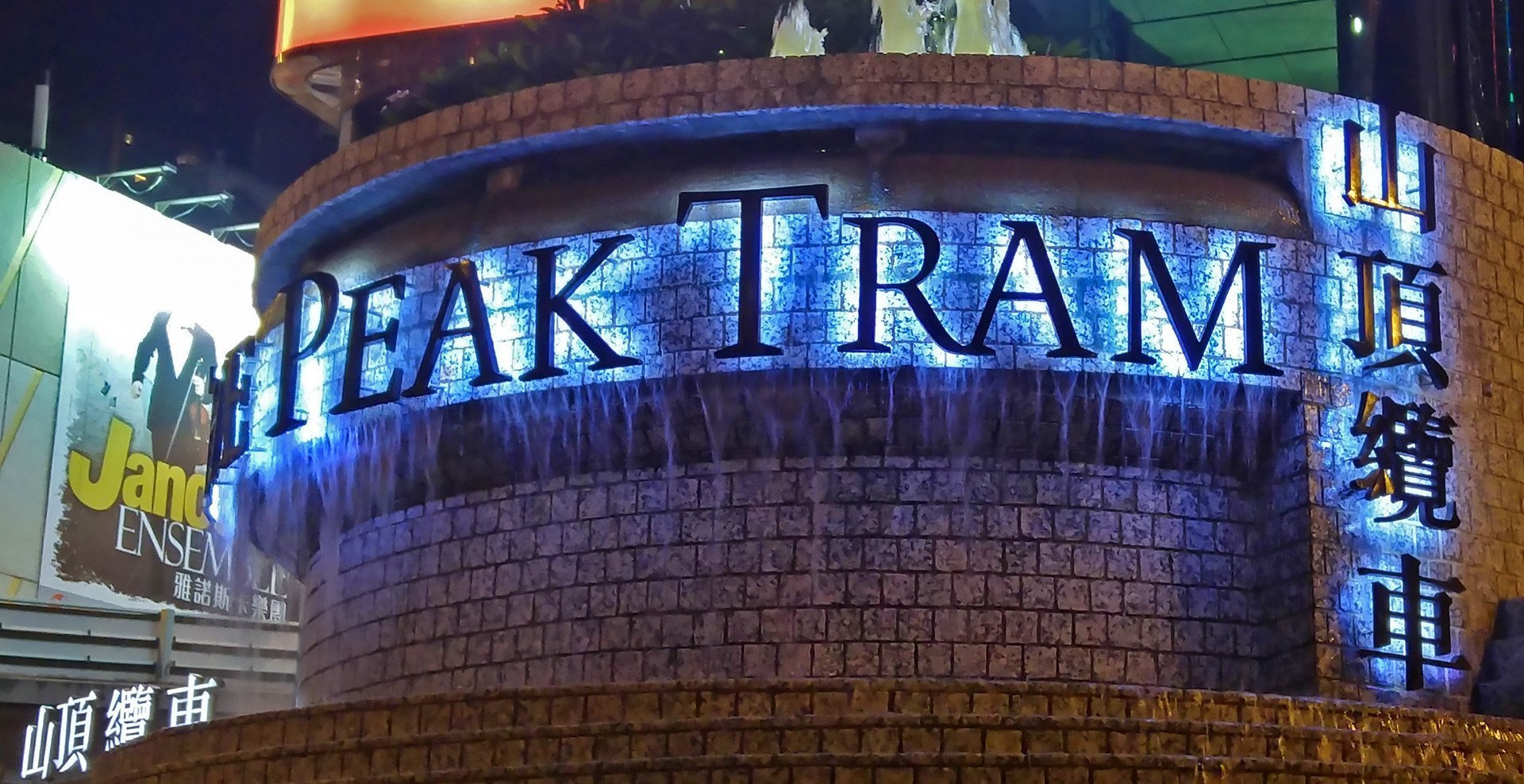