One of the great things about managing a blog is that it encourages you to do things you normally wouldn’t. Whether you have created your blog out of interest or for passive income, you start to pay attention to products and events you previously wouldn’t take a second look at. You need to do so in order to always have something new to write about.

This is the case for me when it comes to the annual Singapore Night Festival. Now, I know about the festival, of course, but I have never attended any because, hmm, I always assumed it would be really crowded and touristy.

Since I have photography and travel as themes on this blog, though, I decided I really ought to give it a look-see this year. The blogging aspect aside, it would be great night photography practice. How was the festival? How was my visit?

Check out my photos and see for yourself!

At the National Museum of Singapore

I began the evening at the National Museum of Singapore, which has always been the heart of the Singapore Night Festival. Here’s where the most breathtaking and anticipated displays usually are.

For whatever reason, perhaps my mind was still befuddled by the IPL laser treatment yesterday, I misread the starting time and ended up early for 45 minutes! Thankfully, I managed to find a place to sit. Of note, it was hardly as crowded as I thought it would be. The weather was also pleasantly cool, thanks to rain elsewhere in Singapore earlier on.

Shortly before 730 pm, a countdown commenced on the museum façade.

Showtime!! According to the festival brochure, this light projection show is titled Convolutions, by EZ3kiel.

FYI, if you’re keen on seeing Convolutions in person, you need not be at the National Museum at 730 pm exactly. The show is a loop, with the countdown and a second display beginning immediately after the first. I have no idea how long the looping would continue, though, since I moved away after the second session.

Decision time. From reading the festival brochure, I realised that the event areas are quite spread out, with all sorts of indoor programmes all over too. Since my priority is photo-taking, I decided I’d focus on covering as many outdoor areas as possible.

Besides, most performances are also scheduled for next weekend, with this week being for “night lights.” With so much to see, I’d likely drop by the festival a second or even third time.

My next stop was thus the Singapore Art Museum, where there’s an outdoor display called The Standing Men by AADN of France. You know, I think these dudes whisper or something because everybody was putting their ears against their faces. I didn’t do so, though, as they reminded me of certain science fiction movies. I decided I ought to be respectful.

Moving on, I followed the crowds and proceeded down Queen Street. Along the way was a futuristic looking installation that regularly made a rather alarming crackling sound. Prior to this, I also took the chance to photograph Church of Saints Peter & Paul, which was all lit up and atmospheric.

At the junction of Queen Street and Middle Road is the National Design Centre, one of the “centres” of Zone 5. (The other being the Art Museum). If I remember correctly, this used to be a convent or school, and around 15 years ago, when I last came here, this housed a Chinese opera organisation.

Anyway, it’s all modern and swanky now. There’s also a very cool-looking bar which I’ll definitely check out one of these days.

By the way, Phosphene, one of the highlights of the festival, is at the National Design Centre. Unfortunately, the queue was rather long. Given I still have several areas to cover, I decided I’d skip and return another day.

That’s it for this post! Please continue to part 2, which contains pictures from the other zones of the festival. 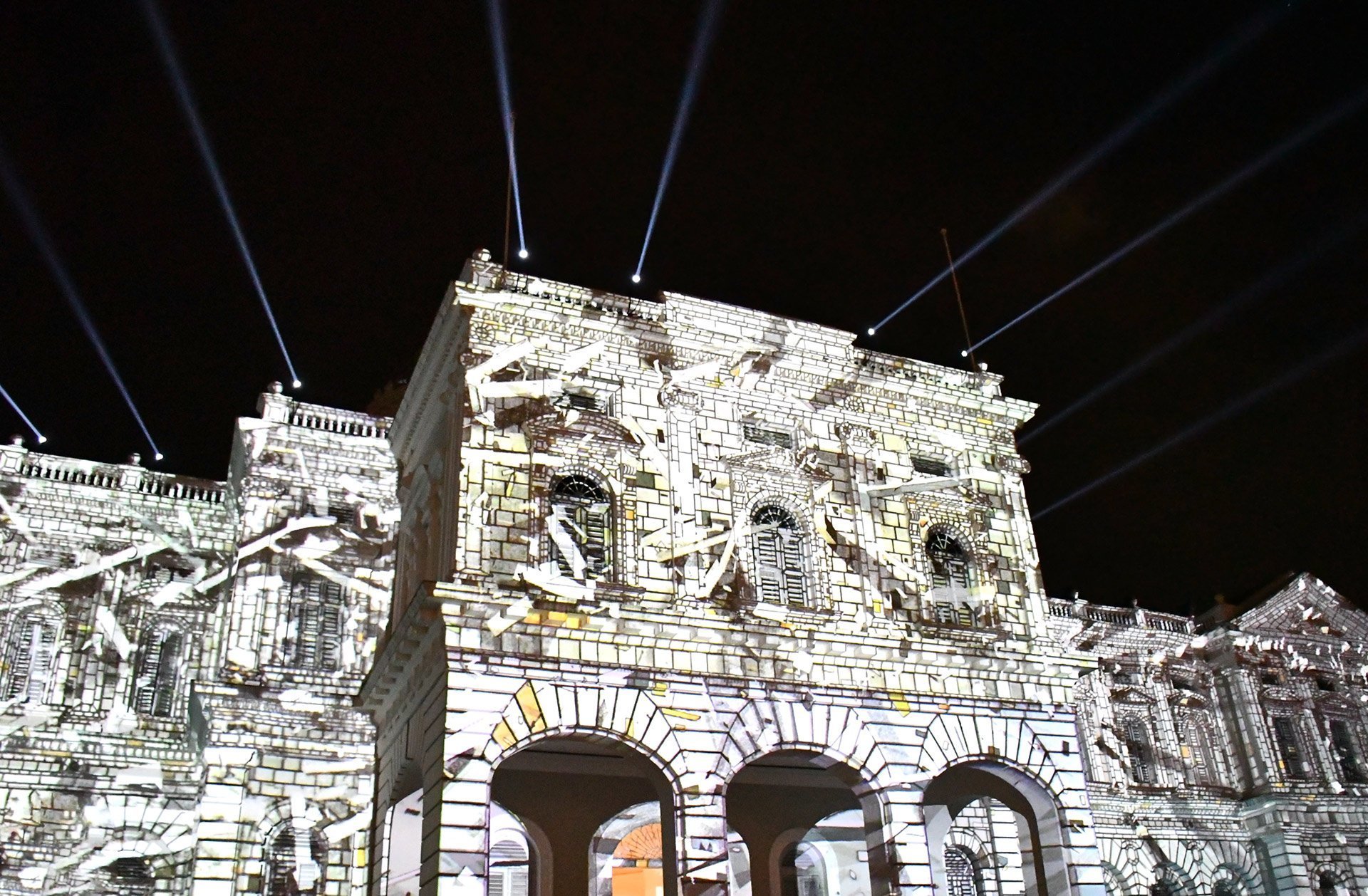