5 Famicom Classic Games to Play Before Your Japanese Holiday

Looking to get into the mood for your Japanese holiday? Give these 5 Famicom Classic Games a tryout!
(As usual, all screenshots belong to their respective developers or publishers)

First of all, none of these Famicom classic games are travel guides. No top 5, top 10 you-must-see-or-do information within them.

The 8-bit creations they are, they are also vastly limited when it comes to details. Even those with in-game dialogues go no further than simplistic, do-you-want-to-buy, are-you-staying-the-night, and so on.

The above said, these retro gems are still great at churning up anticipation or excitement for your Japanese holiday. Like coffee table books, they point you toward what’s unique in Japan or give you an idea of what to keep an eye out for.

With the Internet, you can then research in depth for specific information to enhance or broaden your itinerary. One other thing. These being 30-year-old retro titles, they are extremely easy to bring with you on your trip. I’m not going to tell you how. I’d just say time breezes by on the Shinkansen when you’re engrossed with one of these retro gems.

Simply put, this was the retro Famicom game that made me return to Japan again and again. The game itself is literally a long Japanese trip, an expansive saga stretching from Kyushu to Ezo (Hokkaido).

In it, you play as the legendary picaresque thief Goemon Ishikawa. Your objective is to journey across various Japanese fiefdoms to pinpoint the location of the mysterious Karakuri (Mechanical) Castle. Supposedly, a vast treasure is held here.

If it’s not already obvious, every part of Ganbare Goemon 2 also screams Japanese holiday. From whimsical music to the inclusion of famous Japanese landmarks, to Japanese local delicacies being sold in shops for HP replenishment.

Within the game, you can even visit hot springs, choose different suites to rest in, or watch sexy yūkaku shows. (You must watch one when playing. It’s a heady experience.)

To share, this Famicom classic game left such an impression on me, I still hum its soundtrack when holidaying in Japan. Lastly, I chose part 2 instead of 1 for this list because of the sequel’s superior mechanics and design. If you like this pan-Japanese trip, you could also try the SNES versions next. The first two episodes for the SNES follow the same exotic traveling format.

Of all five Famicom classic games on this list, Fudō Myōō Den was the only one given a western localisation in the 80s. Renamed as Demon Sword, the re-worked product was one word. Horrific.

Stages and items were slashed, the box art was also revised to reflect some sort of barbarian, Conan-like adventure. In short, the entire Japanese feel of the original title was completely abandoned. Thrashed, in favour of a savage-land adventure.

This is such a great pity because the original Fudō Myōō Den was a spectacular showcase of Japanese Noh and mysticism culture, with all 17 bosses inspired by classic Noh or Yokai monsters. Heard of the murderous Yuki-Onna, or the conniving Tengu? Ever felt the creeps while staring at one of those smiley Noh masks? They are all in this game for you to meet and battle.

The experience is further enhanced by you having a plethora of ninja weapons and skills at your disposal. Shurikens, image-splitters, dragon transfiguration, the likes of, they are all in this game.

I think it’s not an exaggeration to say that among retro Famicom games, Fudō Myōō Den is one of the best when it comes to encapsulating the mythical Japanese experience. On another note, this title really, really deserves to be remade for the modern consoles. One seriously wonders why that has yet to happen.

Getsu Fūma Den is many things.

It’s one of the most expansive Famicom classic games ever made, with a gaming area spanning four islands and tens of hellish zones.

It has also never been remade for newer consoles, despite its legendary status and badass music, thus making the game an oddity in the gaming world. For virtual tourists, what’s further noteworthy about this classic Konami title are the stage designs; platforming levels that are filled to the brim with all sorts of macabre, oh-so-Japanese monsters.

If you’re curious about Japanese Yokai (妖怪) culture, look no further. Getsu Fūma Den is one of the best visual introductions you can have. One of the most thrilling plays too.

A note here about Yokai. While the kanji means “aberration,” not all Yokai are wicked. In modern times, some are even beloved and branded as tourist mascots.

The Yokai enemies in Getsu Fūma Den, on the other hand, are decisively evil and nothing you should not immediately cut down with your katana. To assist you, the game offers a slew of utterly Japanese armaments. How about a taiko drum that shoots the kanji for strength? Or a phalanx of classic ninja shurikens?

This Famicom title is one adventure that would definitely enhance your Japanese holiday. Try playing it before visiting deep mountains or forlorn ancient temples. You might start imagining creatures lurking in every corner.

Note: Despite the medieval setting, Getsu Fūma Den is actually set in the future. It tells the story of Fūma, whose brothers were killed by the evil Ryūkotsuki from Hell. The only way for Fūma to defeat Ryūkotsuki is to then recover all three Hadōken swords, family heirlooms that were stolen by the demon. With 2D and 3D gameplay, and all sorts of outlandish stage design, Getsu Fūma Den is one of the most exotic Famicom games ever made.

Hi no Tori was my tenth NES / Famicom game. When my dad bought it for me in 1988, I had no idea it was based on one of the most philosophical and acclaimed manga ever created.

Drawing inspiration from the Hō-ō (鳳凰, phoenix) chapter of Osamu Tezuka’s magnum opus of the same name, the game tells the story of Gaou, a one-eye, one-arm misanthropic outcast who turned to crime because of discrimination he suffered throughout his life. After a monk enlightened him, Gaou renounced his violent ways and became a Buddhist sculptor.

The game itself involves Gaou’s quest to reassemble a phoenix sculpture that was stolen from him. The mythical sculpture had been broken into 16 parts, with fragments scattered all across time.

Sounds grim and heavy, doesn’t it? Trust me, Hi no Tori is anything but dreary. With upbeat music, colourful graphics, and an overall ease of play, the game takes you on a giddying journey from prehistoric Japan to futuristic outer space. Making the journey even more unique is Gaou’s ability to create onigawara on the spot, these being temple roof corner pieces that allow him to reach inaccessible platforms.

Why is this game wonderful before or during a Japanese holiday? Why is it also perfect for a video game tourist? Because it’s a loving homage to classic manga and anime! You’d be immersing yourself in the adventures millions of Japanese grew up with.

Add to which, Tezuka remains widely honoured throughout Japan as the godfather of manga – you’d inevitably encounter merchandises and exhibitions related to him throughout your trip.

Centrepiece among many of these would be that phoenix you strive to reassemble in this classic Famicom game.

Note: The stage design for Hi no Tori Hououhen: Gaou no Bouken could best be described as esoteric. While this might feel haphazard, it’s really because the game incorporates elements from other Hi no Tori chapters. For example, the Mirai (未来, future) chapter.

Like other ancient nations, Japan has an abundance of myths and legends. What makes these stories exceptionally interesting is that many often contains a harmonious mix of Shinto, Buddhist and folkloric beliefs. It is not uncommon to find both Buddhist and Shinto elements within the same Japanese myth.

Likewise, Namco’s Yokai Dochuki doesn’t focus on just one story or faith. Instead, it’s a mishmash of various traditions presented in adorable, super kawaii style. As Tarosuke, you journey through hell to meet the Buddha, battling tons of Yokai and completing eccentric quests on the way.

Depending on your actions in the five long stages, you are then thrown into one of five endings, all of which are based on the realms of rebirth identified in Buddhist teachings. To achieve the best ending, you must put the Buddhist precept of non-violence into action, which means …

I’m not going to give it away. I’d just say Yokai Dochuki will add meaning to every Buddhist site you visit in Japan. This is also one of the best Famicom classic games to play if you are curious with Japanese folklore.

FAQ for players who do not read Japanese. You’d need it!

Do you have any favourite retro Famicom games which are perfect for playing during holidays in Japan, or before?
Comment and share with me!

Read this post if you’re heading to China instead of Japan. 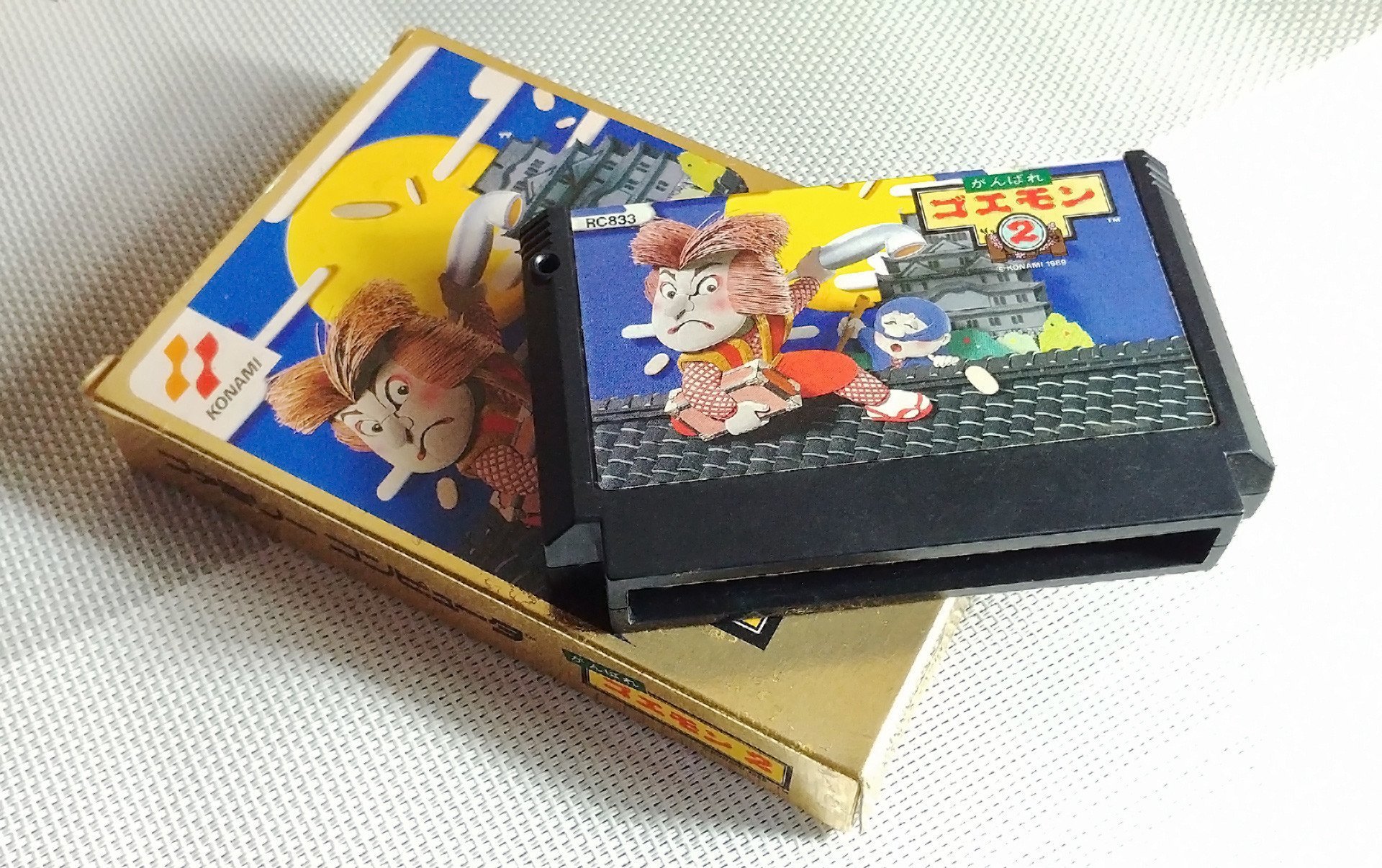