25 iconic horror movie quotes to make you look smart, witty, or just downright creepy in a variety of life situations. (Screenshots to movie distributors or publishers)

An evergreen in every other horror movie quotes list, you could use this classic declaration from Psycho (1960) to describe how dependent somebody is on his mum. Or you could use this to explain why you can never spend a night out with any of your buddies.

This one is kind of limited in its usage; it’s only suitable for people you just spent the night with. Extremely effective, though, if you do not ever want to hear from that person again. (And please, it should ONLY be used figuratively)

The mother of all horror movie quotes and perfect for many life situations. Best proclaimed in a spitting sort of way. Because that adds to the effect, and the resulting revulsion gives you time to back away in case the recipient attacks.

This exhortation is magnificent for a plethora of life situations. For example, when appealing to someone’s sense of morality. (Or getting them to please move away from some dangerous place)

5. “You could have dinner with us… my brother makes good head cheese! You like head cheese?” — Hitchhiker, The Texas Chainsaw Massacre (1974)


Ever felt obliged to invite someone over for dinner, but you really, really prefer not to? You could say this in a feverish kind of way and hopefully, the person is bright enough to take a hint.

If you’ve watched the movie, you’d know what happened next. Great for emphasizing to someone the incredible amount of sacrifice you are going through for them.

Repeat nine times, with suitable hysteria, to implore someone to please not go out in whatever nonsense they are wearing.

Horror movie quotes are more versatile in usage than most people would imagine. For example, you could use this classic one to explain your endless string of life failures. Or you could use it to decline involvement in a work project. Lastly, you could moan this a couple of times to scare away an unattractive blind date.

You know the times when you so desperately need to convince friends that everyone in your office is scheming against you? This one gets the point across.

10. “Why have you disturbed our sleep; awakened us from our ancient slumber?” Cheryl, The Evil Dead (1981)

For all those mornings (and afternoons) when you have been awakened too early, or too roughly. Needs to be voiced in a spooky, unearthly voice.

By the way, if you’re waiting for those five to appear on this list, they’re not going to. Because, you know, Jason and Michael Myers never completed speech therapy. Freddie Krueger talks way too much to be memorable.

You can start with this famous horror movie quote when you are unsure whether you can adequately explain the convoluted circumstances leading to your current predicament. It secures attention. It also lightens i.e. sets the mood for the barrage of info to come.

Unless you are living in some sort of an alternate reality, chances are, you wouldn’t get the chance to literally mean this. But hey, it has the ring of a great proclamation, right?

For dudes only. This quote is really great when you need to highlight to your girlfriend, or boyfriend, that you are a sensitive soul.  You might need to de-americanise some of the words, though.

I use this regularly and believe me, it’s splendid motivation during crisis moments.

One of the bluntest and most disturbing quotes from a horror film ever. I strongly suggest you use this only when writing dialogue for villains. Never in real-life.

You don’t need to be someone’s fan to use this quote. Actually, this is far more suitable for the opposite situation. Such as when someone just can’t stop bragging about himself.

Ever been asked by a friend why he or she just can’t get a date, land a job, or even find a movie partner? This quote tersely explains all.

Another motivation quote. This one is perfect as a perk-you-up. It makes you sound religious too.

19. “A census taker once tried to test me. I ate his liver with some fava beans and a nice Chianti.” — Hannibal Lecter, The Silence of the Lambs (1991)

Hopkins’ Hannibal Lecter left us plenty of memorable quotes, with this being the most famous. Given how well-known the character is, this classic horror movie quote is probably only useful when you wish to show off your Lecter imitation. Or be tastefully distasteful during boring formal dinners.

My dentist swears by this chant for her root canal procedures.

The usage requirement for this horror film quote is a bit complex. Ideally, you should only use it to explain your involvement in some nefarious scheme. But I suppose you could also use it to justify your unwelcomed involvement in anything.

One of the most famous newer horror movie quotes. And well, just about perfect for any situation when you need to be creepy.

If you need this to be explained, you’re likely the one needing to be told this.

Ever had important things lying about at home or in office, and people just CAN’T resist fiddling with them? Say this.

25. “When he’s near, everything goes wrong. Toast falls jelly-side down, children hit tables, and people get hurt.” — Ramirez, Devil (2010)

As is obvious, highly useful for emphasizing how disastrous someone is. Could also be used to condemn a wide variety of folks. From colleagues to ex-lovers, to politicians, to a certain elected world leader. 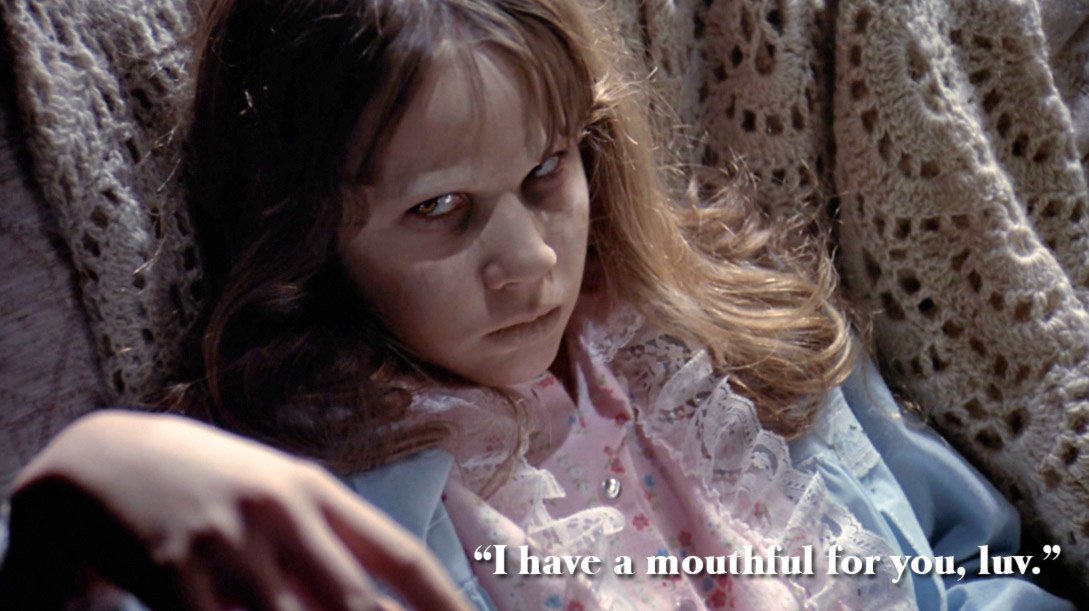 Article Name
25 Horror Movie Quotes for Different Life Situations
Description
Ever been lost for words during complicated life situations? Here are 25 iconic horror movie quotes to help you along!
Author
The Scribbling Geek