A Wuxia Adventure with Bujingai: The Forsaken City

Experiencing the outlandish Chinese genre of Wuxia through the PlayStation 2 classic, Bujingai: The Forsaken City.

Hong Kong, with its unique architecture and street culture, provides the perfect setting for video games. In my previous video game tourist series, I described how the ex-colony was vividly brought to life in the 2012 United Front masterpiece, Sleeping Dogs.

Triads and gangs are hardly the only things associated with Hong Kong, though. There’s also the fascinating storytelling genre of Wuxia (武侠) – a world in which medieval pugilists effortlessly scale walls and leap atop tall buildings using qinggong, and accomplish miraculous feats such as instant healing through the cultivation of inner energy.

In fact, it was Hong Kong, not mainland China, that popularised this genre of Chinese popular fiction, a task accomplished through half a century of Wuxia movies and television series. Hong Kong, Chinese, and Taiwanese developers have also been churning out hundreds of Wuxia game titles since the 90s.

The latter is in stark contrast to other game developing countries such as Japan. While the genre is reasonably famous, there just weren’t that many faithfully “Wuxia” games from non-Chinese studios. Even titles like Shenmue, Heavenly Sword, and Jade Empire, could only be described as loosely Wuxia-inspired.

Like the other titles I’ve mentioned above, Bujingai: The Forsaken City, isn’t a true Wuxia game. It has way too many supernatural bits. The story is also set in the distant future, with characters that are on the whole, too Japanese in portrayal.

That said, many other aspects of Bujingai are decisively Wuxia in feel, particularly the stylised sword fighting, the costume design, and the combat posturing. (Combat posturing is a huge part of Wuxia fight choreography)

Overall, I’d say Bujingai: The Forsaken City is a good introduction to Wuxia for international gamers too, one that enthusiastically showcases the more outlandish characteristics of the genre. Best of all, the game incorporates a thick mix of Hong Kong and classic Chinese architecture into its stage designs. Playing it is thus akin to leaping headfirst into a Wuxia movie set. Albeit, a really weird one with Anime and strong post-apocalyptic elements.

Bujingai: The Forsaken City is a hack ‘n’ slash. Its story is hard to summarise because it’s non-linear and some parts do not make sense. To add to the confusion, there are also differences between what’s written online and what’s printed in the Japanese manual.

But in short, the adventure is about Lau Wong, a mythical swordmaster who returns to Earth to battle Rei, a former fellow disciple who has turned to the dark side.

Centuries ago, most of Earth’s population was killed by a nuclear disaster. In the aftermath, survivors acquired special abilities by harnessing the energies of the earth.

Meanwhile, monsters have appeared all over Asia too, on top of taking over the city of Bujingai. (Or the island of Kenkisoukendo in the Japanese version). As Lau battles the forces of Rei, he discovers the reason for his former friend’s descent into darkness. All seems to revolve around a mysterious woman named Youfa.

Our Guide for this Wuxia Adventure: Lau Wong (劉 王羽)

All screenshots are owned by Taito Corporation and Red Entertainment.

Notably, Japanese pop icon Gackt provided the motion captures for the creation of Lau Wong. While this doesn’t sound like a big deal nowadays, remember that Bujingai was released in 2003. This was a big thing in the PS2 age.


Come to think of it, Bujingai would make for a great open-world game if remade for today’s consoles. Do you agree?

That’s all for this brief Wuxia adventure!
If you’ve enjoyed it, and your PS2 is still working, consider getting a copy of Bujingai: The Forsaken City! 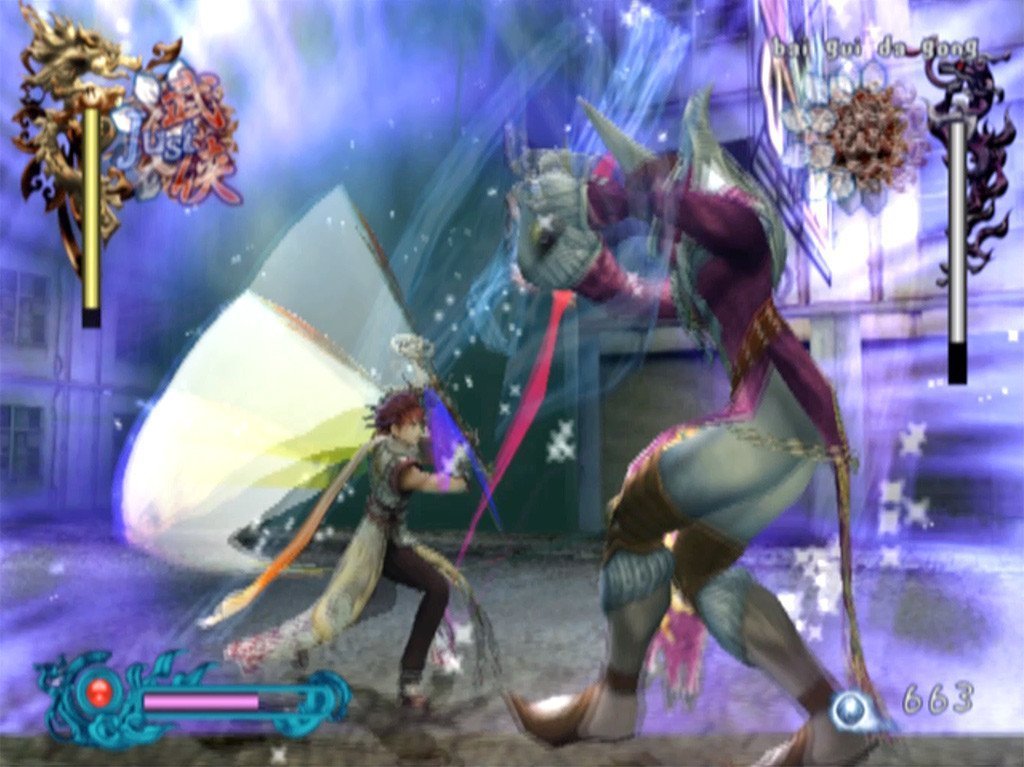 Article Name
Bujingai: The Forsaken City – A Wuxia Adventure
Description
Are you familiar with Chinese Wuxia? If not, the PlayStation 2 classic, Bujingai: The Forsaken City, will be a great introduction for you.
Author
The Scribbling Geek
Share
Facebook
Twitter
Pinterest
WhatsApp
Linkedin
ReddIt
Email
Previous articleMovie Review – Transformers: The Last Knight
Next articleMovie Review – Overdrive (2017 Film)