Given the current political climate, is it an issue of concern when a national leader is to invited to China’s recent OBOR Conference?

Oh dear. I might have found evidence that playing video games is indeed bad for me.

I’ve been so engrossed with maxing confidants in Persona 5, and doing screenshots for my Let’s Travel articles, I near completely missed out on news about China’s rather weirdly named OBOR Conference.

Particularly, how Singapore’s Prime Minister Lee wasn’t invited to discuss the one-belt. This, despite so-claimed decades of strong ties between Singapore and the People’s Republic of China.

I only read about the “snub” this morning, and by that hour, thousands of comments have been posted online. Most sentiments tend to belong to one of two polarised camps, that of fault-the-SG-government for mismanaged relationships, or fault China-the-big-bully.

Generally, though, most comments agree on one thing, this being the non-invite for poor PM Lee harkens worrying times ahead for Singapore. Ties with the Middle Kingdom are now at worrying low, so it’s said. In preparation, Singaporeans must prepare for dark clouds ahead. China’s determination to revive the Silk Route might just sink Singapore’s long prosperous maritime trade.

Sink, as in, for good. No more reliance on our spectacular port! No more riches from international trade and exchange!

Singaporeans must harden resolve. We must unite, we must this and we must that. Oh wait, we must also rally and send a strong message of morality to China. We must remind them that their modern success is entirely due to the support of Singapore during the 70s and 80s. So please, 饮水思源, Chinese proverb for remembering your benefactors. Don’t be a scumbag by dissing Singapore.

I’m not kidding. I actually read that exhortation on Facebook this morning. The one with the proverb.

If it’s still not obvious enough, let me spell it out. I’m being sarcastic. This is no essay about video games being good or bad, or just how real a threat this OBOR Conference is. It’s how dismayed I am by these accusations and exhortations.

Most people babbling away seem to forget one thing. This is China we are talking about. One of the oldest and largest civilizations in the world. Thousands of miles away from Singapore and several hundred times richer in manpower, resources, and money too.

If China decides to exclude Singapore from its multi-billion OBOR Conference, if it decides to place its friendship elsewhere, seriously, what could any Singaporean do about it? The most powerful man in Singapore, the Prime Minister, couldn’t do anything, right?

Remember, the poor dude didn’t even receive an invite. As these net debates remind ad nauseam.

On top of which, if China deems this the right way to go forth with for its economy, if it is certain that this is the best for the mainland Chinese people, who are Singaporeans to condemn the decision? What right do we have? We don’t live there. We are Singaporeans. Not PRC Chinese.

As for the critics on the other end of the spectrum, the ones seizing this incident to condemn PM Lee’s administration, well, I personally feel that their criticism is partly justified. In the sense, none of the few hundred academics and experts surrounding the government seemed to have been able to predict this situation. But then again, even if they did predict it, so what? Would we be able to reverse China’s decision? Do we seriously want to throw ourselves up against East Asia’s long time big brother?

Either way, I think it’s wholly nonsensical to get so worked up because our Prime Minister wasn’t invited to some discussion. I also think it’s downright silly to be angry about another country not putting Singapore’s interest first.

Let me also share this. During Social Studies classes in Primary School, several of my teachers blabbed for hours about how Singapore MUST develop its tertiary industries and not rely on maritime routes forever.

In my opinion, if till today a sudden change in trade routes is going to doom Singapore, then have we not wasted half a century? China or not, conference champagne or not, the end is nigh. No amount of accusation or name-calling is going to salvage this situation. We best be having a serious rethink about what on earth we have been doing for decades.

Here are two very different dissertations on the snub.

I think the issue is, at the moment, still too ambiguous and undeveloped for anyone to remotely be able to predict the long-term outcome. The way politics are, who knows, maybe next month Singapore would be invited to be China’s key SEA ally.

All the more reason not to get worked up this supposed OBOR Conference snub. 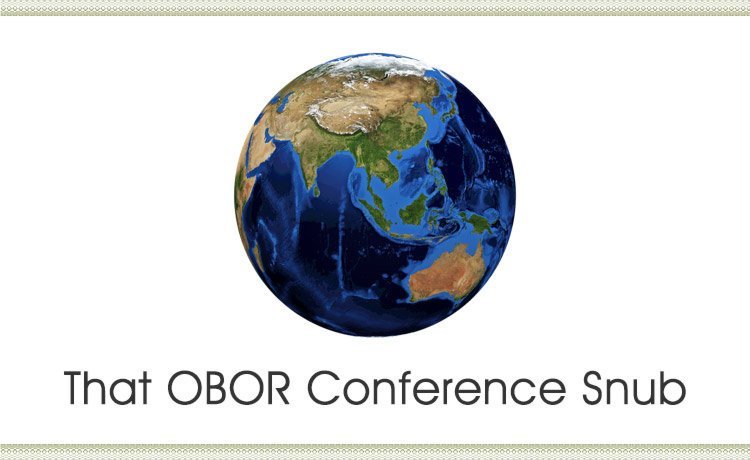