Named the Age of Yore, the final battleground of Toukiden Kiwami journeys back thousands of years to Japan’s legendary founding.
(All game screenshots are owned by Omega Force and Tecmo Koei Games)

Like the case for most civilisations, there are different stories regarding Japan’s founding. There are mythical legends. There are also anthropological, scientific theories.

The mythical version explains why Japan considers itself the Land of the Rising Sun. If you’re interested, I wrote modernised versions of these myths a while ago. You can read these here.

As for scientific theories, most modern experts believe that the Japanese archipelago was inhabited since prehistoric times. During the Jōmon Period (縄文時代) which lasted from BC 14,000 to BC 300, a hunter-gather culture thrived, one that reached significant levels of cultural sophistication.

The name of this ancient period, incidentally, also means “cord-marked,” having been derived from how pottery was decorated by impressing cords upon wet clay. Within video games, the Jōmon Period figurine, or dogū (土偶), is often used to represent the era. The dogū is in many ways, the most well-known face of that era.

Moving forward, at the end of the Jōmon Period, increased contact with the Asian mainland led to ancient Japan acquiring new methods of farming and metallurgy. This ultimately dawned the next historical era, the Yayoi Period (弥生時代).

Compared to the hunter-gathering Jōmon Period, the Yayoi Period is distinguished by new methods of pottery and intensive rice cultivation. Of note, the Yayoi period got its name from an archaeological site near Tokyo, and flourished from Southern Kyushu to Northern Honshu. Historians generally considered it Japan’s Iron Age era.

The Age of Yore is the last battleground to become accessible in Toukiden Kiwami, and could be a wee bit depressing at first sight.

Desert-like and rugged, it’s filled with caverns in which higher-level onis lurk. As the game describes it, much of the battleground feels as if it would soon sink into the sweeping sands too.

That doesn’t mean there’s nothing to enjoy, though, video game tourists! Archaeology enthusiasts would be delighted by the many examples of Japanese prehistorical architecture found here. To add to the ambience, immense dogū statues also loom beside these settlements, and right off the cliffs is the site of a massive burial complex.

While this battleground might not be the most relaxing to stroll in, it is certainly one of the most educational in the game. There is plenty to appreciate and learn from. Plenty of atmospheric “photo spots” too.

For a final time, your humble guide, me …

And that concludes our video game tourist tour of historical Japan! Once again, if you enjoyed this series, please consider getting a copy of Toukiden Kiwami!
Better still, have a holiday in Japan! Nothing beats seeing the actual sites, and imagining yourself battling onis within them. 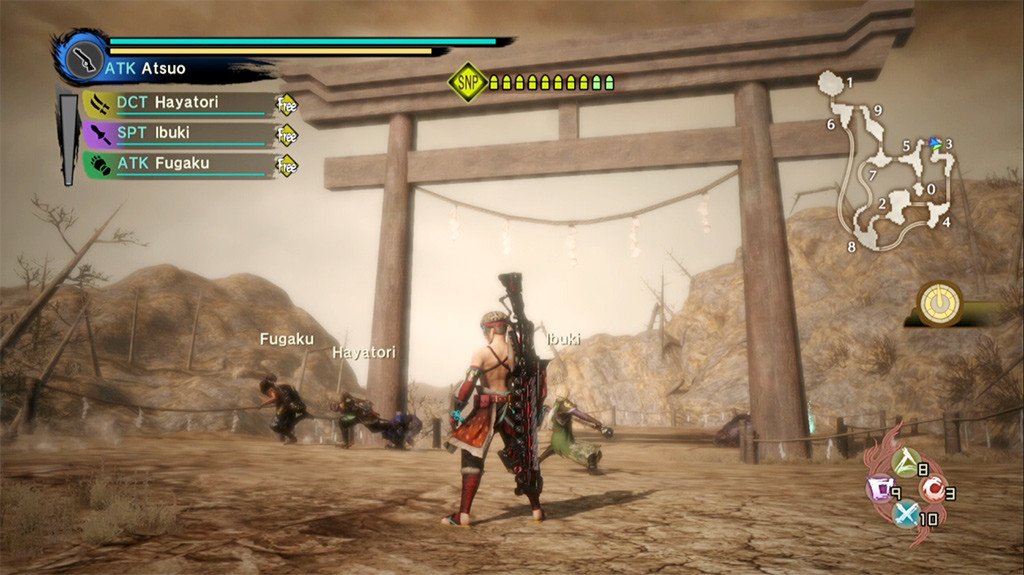