The recent United Airlines fracas demonstrates even leaders of massive MNCs could be clueless about crisis management.

After a brief stint as the Internet’s most despised entity, the United Airlines incident reaches some sort of conclusion, with the victim accepting compensation and the CEO of United Airlines delivering a public apology.

A deeply contrite apology. Well-crafted overall, if I may add. Written to appease supporters of the victim. Also to assure worried passengers that there wouldn’t be any reoccurrence.

Technical finesse aside, though, I wonder how effective this apology would be in re-establishing consumer faith in United Airlines.

During this hour, emotions are at their most intense, and correspondingly, the audience-at-large are sponges for conclusions and convictions. In the case of UA, they chose to be defensive. Offensively defensive.

They defended their staff. They defended their practices. Worst of all, they tried to shift blame onto the victim. A move which, by the way, resulted in the victim’s past being publicised. In short, it felt almost as if UA was hungry for the world to hate them.  Them, as in UA.

Hungry for the world to hate them, because their responses declared two horrific positions.

I don’t claim to be a sociologist or psychologist. But I bet money that these two declarations were what fuelled public anger so dramatically.

We Can Do This Because We Have the Right To …


To be honest, I wasn’t that affected by the whole United Airlines incident, even if it did horrify for a while. UA is one of the airlines I wouldn’t consider flying with. My mileage plans “lock” me to other airlines too.

The fracas did remind me of something else, though. An incident involving my compulsory military conscription in Singapore. This incident ultimately resulted in me losing several thousand dollars of entitlement/compensation/reward. In addition to having to live with a sour taste for the rest of my life.

Without going into the finer details of my episode, the rights and the wrongs, let me just say that when I finally succeeded in forcing my commanding officer to give a response, he said something to the likes of Oscar Munoz’s initial statement.

Not exactly “we can do this because we …”

But similarly, a not-so-veiled statement insisting that my military unit only did what it has the authority to.

Of course, the man ultimately stood down from this position, after I dished out a waterfall of other grievances. Thereafter, he struggled to divorce himself of responsibility, before mumbling some semblance of an apology. (To be fair to him, he did offer a solution. A non-feasible one)

Now, I’m not bringing up such personal history as an attempt to revive the matter, I’ve long accepted that nothing could be done without greater loss on my part. I’m mentioning my episode to show that apologies achieved through such confrontations are seldom convincing. Few, if any, would consider them as sincere or genuine. What was said or done earlier during the Golden Hour already established the true mentality of the person(s) involved.

In the case of my commanding officer, this would be his conviction that he did no wrong. And he shouldn’t be the one forced to attend to me.

In the case of the United Airlines incident, this would be the harsh reality that it was really the worldwide fallout that cornered UA into an apology. Without that, I doubt Mr. Munoz would have said what he just did.

Now, to be clear, I’m not implying UA is going to fold because of this, or that the world wouldn’t ever forgive them. Given enough time, I believe they’d recover.

Yet, to actuate this recovery, how much money and time would be needed? On top of which there would now be a new threat, one that affects the whole aviation industry.

Do you agree with me when I say many air passengers would now be clutching their cellphones, eagerly, tremblingly, waiting to film the next fracas? Would UA itself be subjected to increased, even unfair scrutiny, by every other passenger it ferries from now on?

In a way, I pity the better staff of UA. The ones stuck working for them.

Another effect of the United Airlines Incident

The drama on board Flight 3411 is the latest manifestation of a worldwide fad. That of people releasing self-taken video evidence, followed by netizens calling for blood.

In Singapore, this is a current area of concern. More and more government leaders, and their associated pundits, are condemning this online lynching trend.

To be clear, I’m neither supportive nor condemning of this practice. I’m too appalled by either extreme to dare form an opinion.

On one hand, you have really frightening persecutions of supposed culprits. I’m not talking about Munoz but about cases of people being misidentified as culprits, and harassed 24/7.

On the other hand, you have bureaucrats like Munoz and my commanding officer. Who would likely have gotten away with everything, had there not been some sort of larger involvement. (In my case, I had the support of a MP)

For the latter, does this not encourage a frightening assumption? The assumption that you would lose any case against a powerful bureaucrat, no matter how maligned you are, unless you have the anger of the public behind you? Correspondingly, does this not further stroke the indignity and the bloodlust of a public always hungry for the next scandal? To the extent it stops bothering about facts?

I think the United Airlines incident really did the world a terrible disfavour.

UA might have silenced the victim with money, and suppressed the hype with beautiful words. But all of us will live with the repercussion of this incident for a good many years to come.

I put this here ‘cos I couldn’t work out where to add this above.

The Golden Hour, and the all-important crisis plan for it.

Why do so many organisations lack a realistic crisis management plan? One that considers all potential major predicaments, and denotes the most appropriate responses to react with?

Is it because these organisations see themselves as being utterly infallible? Or is it because the exercise involved is so unpleasant? Dangerous too, as in, how many dare speak of such things in front of the boss?

The sheer tragedy of it all. 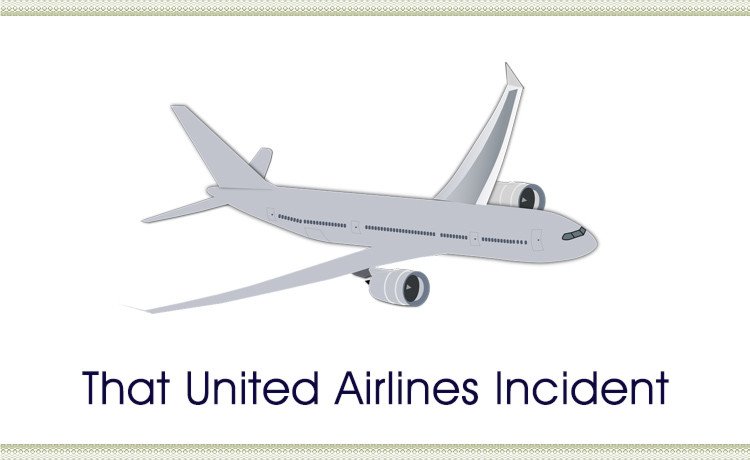