Spent the last few nights playing World of Warcraft till shamefully early hours of the morning. Reason? I unsubscribed and my access was ending. I want to get as many questlines done as possible before my time runs out.

And no. I didn’t unsubscribe because I was unhappy. I regularly unsubscribe, then re-subscribe when there’s new content. Otherwise, as any WoW player would testify, I don’t think I would ever have time for any other game.

Any other pastime, for that matter.

Yes, World of Warcraft. The MMO I’ve been on for over seven years now. The one directly responsible for me neglecting all the Steam games I’ve purchased (on the cheap) and installed. After the disappointment that was Warlords of Draenor, Blizzard Entertainment massively revamped the gameplay system, and now it’s more addictive than ever.  Legion, the current expansion, not only features a highly flexible gameplay system, there’s also loads of unique content to experience. Content mostly free of the sort of repetitive grinding I so hated in previous expansions.

And then there’s Suramar. The new city zone that’s a gorgeous mix of Venice and Arabia. Moving beyond the usual WoW formula of hack, fetch and collect, adventuring here includes stealth elements. You assist an exiled courtier in overthrowing her sovereign, beginning with subterfuge before resorting to open confrontation. I typically get bored with zone questlines quickly. But the Suramar story kept me engrossed for nights.

Yeah. World of Warcraft. I do wonder whether I would ever stop playing this game.

Which brings me to the main topic for this post. While sneaking down the atmospheric streets of Suramar, I started pondering about the future of WoW. I might be completely off here, but the Suramar questlines felt heavily inspired by Assassin’s Creed. To me, Blizzard is once again experimenting with elements of other game genres so as to sustain interest in WoW. During Warlords of Draenor, they tried RTS elements, which didn’t turn out well. In the case of Suramar, they seemed to have found the right formula, as least in my case. For the moment, all feels great and satisfying. Blizzard has secured my interest in the remaining Legion patches, in other words.

But what about subsequent expansions? What’s next to try? How is Patch 8.0 going to be?

Let me confess something here. While I’m enjoying Legion so far, I’m not playing it as often as compared to during Cataclysm or Mists of Pandaria. I still love the game, but a lot of things have long since started feeling bland. The whole, one world-threatening crisis after another approach behind all the expansions. The eternal animosity between Alliance and Horde, which never seems to improve despite so many instances of working together in defeating overwhelming odds. And then there’s the whole resurrection of classic characters. First was Guldan. Followed by Illidan’s return in Legion. Who’s next? Deathwing? The elemental lords?

These are random thoughts. Ideas about the next World of Warcraft expansion that flashed in my head while flying through Azeroth. Or waiting for people to accept invites for raids, etc.

Reclaiming the World of Argus

Many WoW players have suggested this online. The idea of Azerothian forces launching a direct assault on the Burning Legion’s home base.

It’s an intriguing idea. After being on the defensive in so many patches, I think it’s high time for a change in story direction. The demon-infested world of Argus could also provide for some really different landscape designs, nothing like what we’ve been seeing again and again so far. Problem though, I wonder whether one expansion could do justice to a whole new world? In every WoW expansion so far, no more than five to six new zones are introduced.

On the other hand, this could pave the way for a series of expansions. (Three expansions at least?) An invasion of this magnitude could also give Blizzard another go at the Garrison concept, which still feels to have a lot of potential, despite being so awkwardly executed in Warlords of Draenor. It would be interesting to see what Blizzard comes up with in a second attempt.

Queen Azshara and Her Watery Minions

Azshara has long baffled me. She’s directly responsible for Azeroth’s woes with the Burning Legion. She was also actively involved with so many other crises. Yet, no one thought of getting rid of her for good. Is it because, as hinted here and there, she’s potentially as powerful as Sargeras?

Whatever she is, I think it’s high time for her to go. An expansion devoted to her downfall would have enough story content to keep players satisfied. The zones involved also need not be completely underwater. After all, nagas can easily survive on land. One issue though, would an Azshara expansion feel too similar to Wrath of the Lich King and Cataclysm? As in, the entire expansion revolves around taking down one immensely powerful antagonist. After which, there would again be the question of “what’s next?” Hmm. Maybe not that great an idea, on second thought.

Return of the Titans

It’s stated in Legion that the Titans, those godly beings that shaped Azeroth, are long dead. But what is “dead” in the gaming world? Some creative storytelling is all that’s necessary to resurrect anyone.

Resurrect them as antagonists too. A rampaging group of unhappy gods determined to reclaim their greatest jewel. For another go at reshaping it.

It’s a workable idea, IMO. I’m sure the writers at Blizzard would also be able to enrich the basic storyline with all sorts of interesting side-stories. How approving WoW players would be of this concept, however, is a big question. A takeover by the Titans. Isn’t that too similar to the ongoing Burning Legion invasion?

There’s also the question of zones. Where would players be heading this time? Another unfound continent? Some mass of territory raised by the Titans for their invasion? Whichever way, it feels to be a rehash of historical content. Personally, I’m not too keen on this idea.

This is the concept I’m most hopeful for. A WoW expansion devoted to exploring or invading the Twisting Nether.

Purpose for which could be to thwart some nefarious invasion from the Void. Or to rescue imprisoned Titans. Or prevent the rise of another Burning Legion. It doesn’t matter what the actual objective is. Because the thrill of the expansion is space exploration.

With lots of new worlds to investigate, to settle on. And a swanky command ship as the player’s mobile base.

Crazy? Way too much content for one expansion? But hey, must it be an expansion? Why not a reboot? After all, there’s only so much more Blizzard could do with the World of Warcraft without entirely changing it. After over a decade of the same sort of adventures, wouldn’t a reboot be refreshing?

It would, for me. (Raise hand)

Fingers crossed that this dream of mine would soon be fulfilled by World of Warcraft designers. 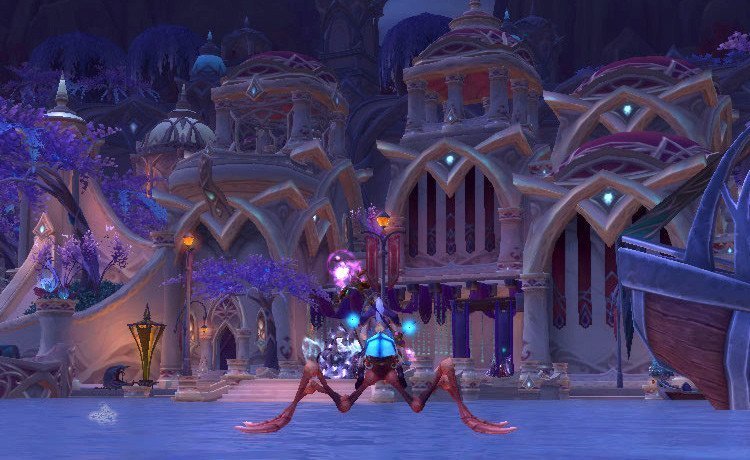