Exclamation marks not added, but implied between each word.

Who the eff? Bryan who? I don’t know anyone with that name. Oh wait. Some housing agent active around my estate goes by that name. But why was he fined and what does it have to do with me? Who … … Wait a minute. I remember now. Bryan Lim is the name of one of Singapore’s fleeting internet sensations. He earned fame overnight after offering to “open fire” on Singaporean homosexuals in a Facebook group post.

Out of curiosity, and because it’s a Friday, I searched online and found this coverage. Yup. 3.5 K for one mindless, irresponsible, agonisingly childish rant. In an anti-gay, Singaporean Facebook group.

No intention of harming anyone. And thus by inference, Bryan Lim didn’t deserve the fine dished to him.

What the eff. How could Bryan Lim not deserve the fine? In fact, I think he ought to count himself lucky he wasn’t given jail time.

First things first, I think nobody in Singapore seriously believed Bryan Lim would really go call-of-duty-ish on Singaporean homosexuals. To put it in Singlish, it was all just garang talk. You know this simply by reading his post. The man was nothing but hot air.

On the other hand, the potential repercussions of his rant are alarming. Terrifying, even. The Facebook group Bryan Lim belonged to is no top-secret, Illuminati-like organisation. It is that easy for anyone, anywhere to join, or to read all the posts there. What if an actual loonie gets positively orgasmic from his words, and started planning something actual?

Maybe not a shooting, given Singapore’s strict anti-gun laws. But a knifing? An assault? Some semi-violent bullying at school or work?

When such things happen, would Bryan Lim and his supporters immediately distance themselves? With the excuse that they can’t be expected to control or predict the minds of strangers?

As for the excuses Bryan clung onto since day one. That he was taken out of context. That he was targeting foreign entities meddling with Singaporean society, blah blah and blah. From one (ex) NS-man to another, what lan sai excuse you giving lah, bro! You think people stupid, is it? You think you what, MP, defence minister, Singapore your lao bei’s country is it?

Please, you are none of this.

To his defenders, freedom of speech and belief do not equate freedom from responsibility. Please stop propagating otherwise. If only for your own children’s sake.

You guys got off with bad publicity and a four-figure fine. The rest of us, straights and gays and even pets, would be shadowed by the repercussion of those words for years. Right now, it’s still too early to know for sure whether any loonie took those words way too seriously. 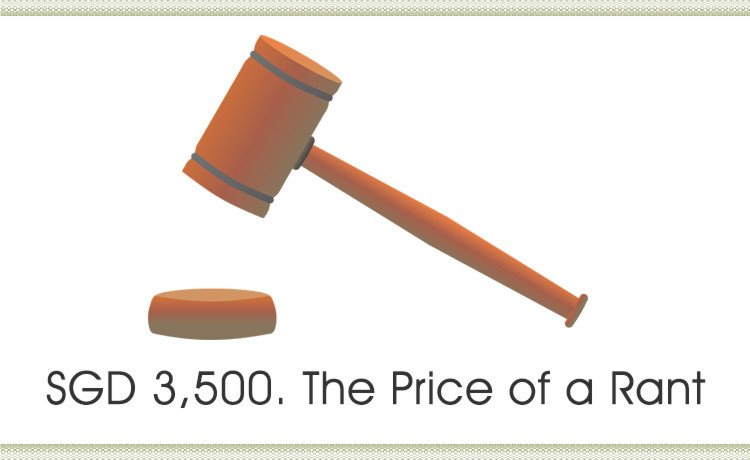