Update Oct 29, 2016: What would you know?!?! It turned out to be a horrid case of mistaken identity! What terrible investigative skills of our online lynch mob!

It strikes again! The Singaporean online lynch mob has found yet another victim.

Victim. Wait. No. The more appropriate word might be, target.

This time, it involves a lady who rolled over a dog with her car. Instead of being aghast, instead of breaking into tears and falling to her knees in convulsing guilt, she allegedly snapped some very unlady-like language. And drove off. This happened last Sunday. Within hours, it was all over social media, with caretakers of the dog requesting help with locating the lady. By Tuesday or thereabout, the identity, residential address and even employer of the lady was unearthed. Determined to enact vengeance, the online lynch mob descended onto the Facebook of her employer and flooded it with negative reviews. This promptly forced that company to issue a statement.

No biggie. Just of those things birthed by the information age. In fact, I seriously doubt Huttons Asia would take any further action, and all would be forgotten once the next target is identified. Still, this latest lynching stirred some self-styled communication pundits to again lament the existence of such online lynch mobs. To quote one of them, two wrongs doesn’t make a right. Previously, the Singaporean prime minister himself also cautioned against such online lynch mob mentality.

The prime minister is right. After all, there is seldom any formal verification of “facts,” and targets are hardly given any chance to defend themselves before their particulars are rank one on Google SG. It is thus the moral thing to do to refrain from such lynching. But … wait a minute. Moral? Isn’t it exactly because of morals that such online lynching happens? Social morals, that is. In the case of this Hutton Staff, she rolled over a dog! A hapless dog! Then she exclaimed, Foo***ooK and drove off! Leh! In other cases, callous characters offended the whole Singaporean population with their thoughtless words and actions. Or downright acted like scums in public. As “moral” citizens, shouldn’t everyone band together to enact vengeance, or at least try to force the authorities to enact vengeance?

“This should be left to the police to investigate.” So commented one person in the Facebook of one of those pundits.

Agreed. Rule and action by law is paramount to any country. Especially a tiny one like Singapore. Moreover, it’s really quite farfetched to consider most of these righteous ones as vigilantes. I’m not talking about Batmans with bat-caves and watch-towers and know-it-all Alfreds. These are just internet users indignant at something they read, thereafter deciding to join in the following hive action. (Without much verification of facts, might I add) To term them an online lynch mob is thus quite apt, and while I don’t feel it would ever result in literal witch-burning situations, it is still unhealthy to have some groups around. Yes. Leave it to the police. Keep everything neat and official. Let those responsible for formal investigation do the investigating.

Do policemen investigate rollover of dogs? Especially when the doggie, didn’t die?

Could you file a police report about the man who yelled at you to give up your seat on the bus? The neighbour who insists on watching TV at full volume at 3am? The job interviewer who tells you to get lost because you’re not the race he prefers?

Probably yes. Even if not, there are other agencies to seek help from. Agencies that might, admittedly, take a long time to get things done.

What about those brainless gutter-mouths? Those who deride the nation, other races, whatever, in social media? Sins committed during moments of unthinking arrogance. Who do you report those to? Facebook? Send a PM to Bro Zuckerberg?

Back to the lady and the tramp, wait, I mean the lady and the rolled over doggie. Assuming she gets prosecuted, and fined a certain amount, would she be more pleasant in her disposition in the future? Or is it going to result in her becoming more vindictive, especially towards dogs and animal lovers? Would the experience of being hounded by an online lynch mob, conversely, be more effective in taming her? As in, simply out of fear of another incident threatening her privacy and career, she would think thrice before behaving like a bitch?

I have no idea. I suspect it’s the same with most Singaporeans, including those fond of lynching.

Which is also the reason why online lynching is so popular nowadays in Singapore. The malicious euphoria of destroying someone with words aside, most Singaporeans do not know who to turn to in such prickly incidences. Or they expect too much address. Or the process of address is too arduous. Or they simply do not have faith in the government being the arbitrator. And oh, there is of course also that craving to be the Singaporean Batman. Come on, who doesn’t want to be the glorious dark knight of Singapore? (I have a Batman tee at my age!) Problem is, how many of these matters truly involve justice? How many of these matters are battles between light and darkness? And is it just to drag in the uninvolved, such as employers, into one’s quest for justice?

I state a firm no to the last question.

But many would disagree with me. I might even kena lynched for saying so. 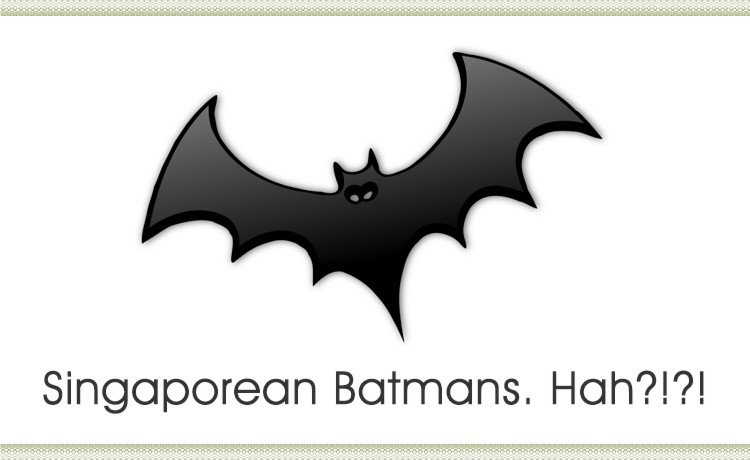