The Devil And The Deep Blue Sea

You must have heard of this idiom, this cliché before. Between the devil and the deep blue sea.

If you haven’t (gasp!), it means having to choose one of two undesirable situations. For whatever reason, you landed yourself in that fix of having to decide between two evils. Most people usually end up choosing what they deem to be the lesser evil.

Horrible. If it not?

Except, except … Several of these situations aren’t exactly a clear cut case of either / or, are they? A failing setup could be salvaged by strategic team-up with profitable partners. In the case of elections, what about walking away? What about the decision not to vote? Sure, not voting typically has little impact on the final outcome of the election. In some countries, it’s also illegal. But what the wisdom in only acknowledging only the worst decisions, when there could be a slew of other options or variations? What the sense in narrowing intelligent choice to a case of yes or no, this or that?

Personally, I think to do so is lamentable. In the case of political elections, I’d go as far as to say it’s a devolution of society. An insult to true democracy.

Should Voting Be Compulsory?

As mentioned, voting is compulsory, mandatory, in some countries.

Failure to vote doesn’t incur jail sentences. Where I am, if you don’t vote, you are struck off the register. However, you could explain yourself and request for a reinstatement. If your explanation is deemed to be unsatisfactory, you have a pay a small fine for the reinstatement.

Sounds fair, yes? To also quote the laws of where I am, voting is part of the responsibilities of adult citizens. At the same time, according to articles like this, voting is a step towards ensuring true representation. This same article also claims low voters turnout pushes politics and governance towards polarities. (Politicians seek to please only the loud, vocal voices, which are usually in the minority, and not the actual masses)

Again, reasonable arguments and systematic implementations towards true democracy. However, it really should be noted that such lofty aspirations are only achievable when there is an informed and intelligent electorate, and when the system is capable of churning out decent candidates. What happens when two ruffians are placed on the selection pedestal? Two ruffians who ended up being the only choices not because of their capabilities or visions, but because of flair and personal connections? What happens when you force hundreds of thousands of clueless voters to decide, and being clueless, they end up evaluating with yardsticks like, who looks better, who sounds better, who has flashier academic credentials, etc? Who and what ends up in power?

It a grim situation. A firm step towards the worse off. Many would insist otherwise, though, and I suspect their primary reason would be the prevention of systematic paralysis. It’s like, gosh, someone needs to be in the seat, right? RIGHT? What’s going to happen if we don’t have a president for years? What doom are we heading for if we don’t have a functioning parliament? Arggg! (!!) They have a point, I ruefully agree. But then, under an even loftier aspiration, perhaps efforts should instead emphasise on improving the system. To ensure the system churns out suitable candidates. To perhaps also ensure candidates do not win office with an absurd victory like 20 per cent of total votes counted.

Yeah. A system that could churn out ideal politicians.

Characters of integrity and might. The best for the population.

WTH am I writing? How could any human system ensure that? I can’t even think of any means, however fantastical, to work towards that aim.

Which is why people should not be forced to vote between the devil and the deep blue sea. Citizens shouldn’t be pushed into that sort of situation. What good could it possibly bring? You might avoid a shutdown now, but what about the gridlocks down the road caused by voters who regretted their choice or voted for the loser?

Would it make more sense to have a system that demands minimal turnout? As in, yeah. You won 65 to 35 per cent. But total votes counted is only 30 percent of eligible voters. (Which calculates to be 19.5 percent of people loving you) Too bad! Try again! Or step aside for a better player! Yup. Paralysis of system follows. Potential devastating gridlock for months or years. But this is no more than biting the bullet now instead of later. You gnaw the bullet now, instead of the bomb down the road.

Once again, people shouldn’t be forced to pick between the devil and the deep blue sea.

Instead, you prevent them from getting into that sort of silly situation, to begin with.

When It’s Just The Devil

I’m compelled to include this. That other situation when there aren’t two contentious characters in contest. Just one. In some systems, this person is immediately declared the winner.

No devil and the deep blue sea. Just the wicked one. Or a boundless ocean.

Walkover, in other words.

To some, this is the best and the fastest solution. Life continues. Especially when it’s a matter of the incumbent “earning” a new term.

For such situations, I think voting should still not be compulsory, but there should be some sort of endorsement check. If you can’t get an endorsement vote of over a certain percentage, then please step aside, work on improving yourself, or work with the system to ensure competition.

Nonsensical desire? Another assurance of “gridlock?” Yes. But again, is it not a necessary pain to ensure true, capable representation?

To contradict myself somewhat, this is the true case of the devil and the deep blue sea. You choose to endure the agony right away, instead of the worse one down the road.

Wait. Maybe it wouldn’t be a devil. Who knows? It might turn out to be a saint in disguise.

Ever caught in one of these nasty devil and the deep blue sea situations? Please comment and share! 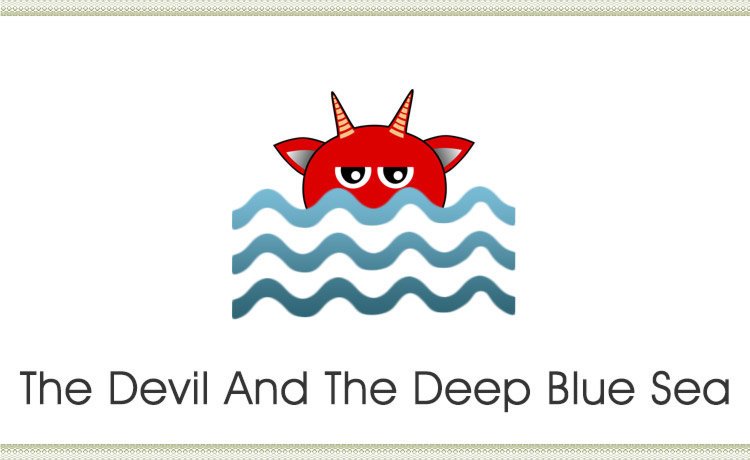