Gantz, be it the manga or the anime version, is notorious for gore and violence. How many times I cringed when watching the anime last year!

None of the fights and deaths, however, unnerved me as much as two supporting characters. This duo surfaced in the third storyline arc as secondary antagonists, and became the main ones in the final story.

Both were young men too, with one below Japanese legal age. In turn, what made them monstrous and unbearable was that they both derived great pleasure from bashing homeless people to death. In other words, both were homeless hunters.

One even did so while cheerfully humming a jingle from a Japanese radio morning exercise segment. To him, bashing homeless people was a healthy exercise. A free and socially beneficial form of entertainment.

Incidentally, this characteralso loved reminding others about his age. As in, how his underage status would shield him from the worst of criminal prosecution even if caught.

Later in the series, it was heavily implied that he was hopelessly psychotic. This “explanation,” however, didn’t soothe. The sheer barbarism of his human hunting indulgence continued to haunt me.

In the end, I had to remind myself that it was all just fiction. Something skilfully and manipulatively written for a very gory tale. Even if there were such sickos, there wouldn’t be that many of them in our world.

And so I forgot about Gantz. That is, for a few months till I played Yakuza 0. In the midst of a later chapter and in what felt to be a statement rather than a necessary plotline, protagonist Kiryu Kazuma fended off two teenage homeless hunterswho attacked his homeless friends.

The two teens in the game were portrayed almost identical to the ones in Gantz, down to their clothing and choice of baseball bats as weapons. One also gloated about being underage and how the law wouldn’t be effective on him.

Suspicious that it was no mere coincidence, I googled for “homeless hunting”, or ホームレス 狩り, which was the term used in both Gantz and Yakuza 0.

It was then that I found this, and this, and this, as well as this. The Japanese site is the wiki for a 1982-1983 case in Yokohama. During this, secondary school boys went about parks and basement shopping areas assaulting homeless men. Two victims subsequently died.

I also found this. A similar case of violence against homeless people that happened in December 2015.

Japan is not the only country with homeless hunting, or homeless killing incidences. Here’s a report regarding the situation in the United States. Here’s one depicting the various types of abuse suffered by “rough sleepers” in the United Kingdom.

Dutch author Herman Koch wrote a novel, titled The Dinner, which was about teens killing a homeless lady and feeling nothing wrong about it. I can only assume Koch was inspired by real-life incidences.

Seems like homeless hunting, which is a recognised term in Japan, has been around for a long time. I was living in an ivory tower not to know of it.

The following is but my personal opinion. I am no criminologist or sociologist. I’m not even going to remotely claim I have any educated insight.

I must also be fair to Japan and remind that ホームレス 狩りremains a phenomenon for the country too. It is doubly puzzling given that some Japanese homeless are literally just “homeless” and not completely unproductive in society.

During work hours, they could be contract labourers or suit-wearing “salary-men.” However, they are unable to afford a rental home and are too ashamed to return to their hometowns. Thus, they resort to illegal residences. In parks, at riversides, beside train stations, the likes of.

Coming back to homeless hunters, my belief is that teens who indulge in such appalling human hunting and bashing, are simply terrified. Of course, they do have that sadistic, murderous streak in them, but beneath it all, they are no more than terrified kids.

The homeless to them represents the worst of their fears, this being the grim reality that the adult working world awaiting them is hardly all peaches and roses. Instead, it is a brutal place where mistakes are never forgiven, never lightly punished.

These homeless hunters often claim that they are merely cleansing their cities of the unsightly or the useless. However, I believe the truth is that these teens are actually swiping at their worst fears. In other words, they refuse to see or be shown what possibly awaits them in adulthood. What they do not see, they then assume would become reality.

“The Homeless Do Not Deserve Help.” Seriously?!

On another note, I feel this warped mentality also applies to the people who adamantly refuse to help the unfortunate. For example, those who claim that the jobless are not those who cannot find jobs, but are instead lazybones who refuse to work.

Not that there is totally no truth in these accusations, but such arguments tend to be magnified till they are the only argument. Yes? In my opinion, supporters of this argument are doing no more than sustaining the illusion of their own perfection. As in, the illusion they have found the best formula for life and have been living it. Vice versa, those who are down and out are the ones who are too stupid or too lazy to discover the magic equation. And so they deserve being destitute, and they deserve no help.

To further blind themselves to the flimsiness of this belief, to blind themselves to the fact that mishaps could strike despite the best-laid plans, these folks then hope for the downtrodden to die out like an unfed fire. Through this, they unconsciously play the same homeless hunting game albeit without the bloodshed. An appalling game based on molding reality through denying reality.

In the case of teenage homeless killers, a whole new world of evil is created, one that substantially taxes social, legislative, and judiciary resources because of the complexity and shock. What do you think then happens? Everything else that threatens lives, homes, and jobs receives lesser attention. The country becomes deadlier, more unforgiving, more condemning for everyone.

As much as they might believe they are ridding their cities of hobos, these teens have actually increased their chances of becoming one. Here, I think it’s also unnecessary to highlight how violence also attracts violence the way rotting meat attracts flies. Oh, these kids might not end up sleeping on the streets, but who can say for sure? Would they one day end up being bashed in the head by a baseball bat for the ten-dollar watches they are wearing?

It’s a horrible game nobody wins at. Doom lurks at each turn. Even bystanders are punished.

At the risk of sounding preachy, if there’s any indication of such senseless violence festering around you, please do whatever you can to stop it.

No country benefits from easy victimisation. No city will ever thrive on the preying of the weak.

No one needs homeless hunting. Let us have lesser of such monstrosities. 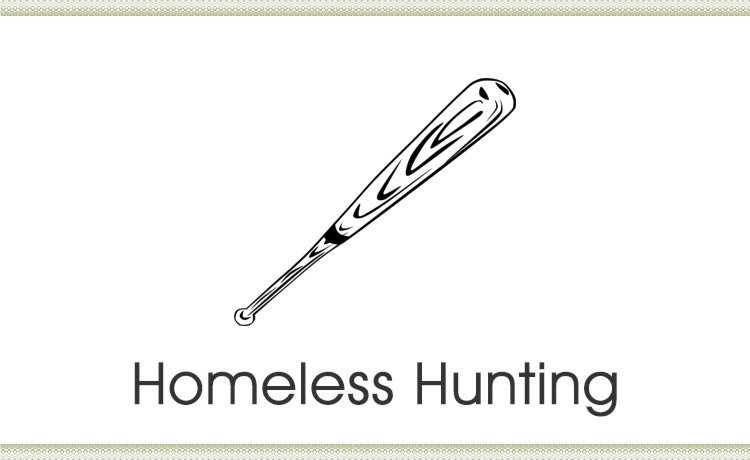 Article Name
Homeless Hunting
Description
I shouldn't be appalled that an atrocity like homeless hunting exists. Or that it has been around for a long time. Yet I still am.
Author
The Scribbling Geek
Share
Facebook
Twitter
Pinterest
WhatsApp
Linkedin
ReddIt
Email
Previous articleClassic Horror Movie Review – The Serpent And The Rainbow
Next articleMovie Review – Kung Fu Panda 3