Why do some people need so, so many luxury handbags? The adventures of the Chinese Monkey King in Journey to the West might have the answer.

A while ago, I posted this picture of Sun Wukong, the mythological Chinese Monkey King from Journey to the West.

Wukong, Monkey to Western audiences, or da sheng ye (大圣爷) to some Chinese, has been my favourite Chinese mythological hero since young.

Spunky, witty, irreverent and prankish too, he’s the exact sort of trickster hero most kids would adore. In terms of magical might, Wukong also possesses a slew of fascinating abilities that would give even the most powerful Marvel superheroes a run for their money, the most famous of these being his 72 polymorphic transformations. Personally, I often wonder what author Wu Cheng’en would say if told his literary creation would one day become one of the most beloved Chinese icons. Would he dismiss such a prediction as nonsense? Or would he smirk knowingly, the way the mighty Wukong often does so in media adaptations?

As for adults, the appeal of the Chinese Monkey King presents itself in another way, in the form of the arduous quest at the heart of Journey to the West. A drawn-out depiction of humanly advancement towards spiritual enlightenment, the episodic stories of the saga are essentially allegories, illustrations of the obstacles one encounters while on the path to awareness. With Wukong himself typically playing the role of the rebellious or the indignant.

In my case, it (embarrassingly) took me a long time to realise this, the turning point being I finally realised one day that, hey, I still enjoy watching the same stories in movies or television series year after year. To put it in another way, there are so many parallels in Journey to the West that are relatable to adults worldwide. In fact, and this might be the ultimate accomplishment of Wu Cheng’en, many of the Ming Dynasty author’s allegories are still directly relevant to our modern world.

To give an example, there’s Zhu Bajie, or Pigsy in Arthur Waley’s well-known translation. The lazy, irresponsible, often backstabbing co-worker all of us have to endure at some point in our working lives.

Or the stern-face, hopelessly idealistic monk Tang Sanzang, appointed master of the Monkey King. Wukong regularly has to go to great lengths to rescue his master from the latter’s own follies. Ever had a boss like that?

Or the myriad of demons who dream of feasting on Sanzang’s flesh. They crave to do so for they believe the act would rid them of previous sins i.e. assist their attainment of godhood. They fail to realize that this obsession to right historical wrongs then effectively blind them to the greater evils they are scheming.

Outside of overt character symbolisms, the other noteworthy thing about Journey to the West is that it also contains a handful of allegories expounding Buddhist thought, many of which aren’t as easily comprehended.

Among these, one of the more obvious lessons is that of the incident at Guanyin Monastery. In short, this tale revolved around the abbot of an opulent monastery, once an enlightened monk but sadly beguiled by his earthly wealth and possessions.

At the sight of Tang Sanzang’s priceless cassock, a magnificent artefact gifted to the holy monk by the Buddha himself, the abbot was utterly overwhelmed by greed. So as to gain possession of the cassock, the misguided abbot and his disciples then devised a wicked scheme to murder Sanzang and Wukong by fire. The scheme naturally flopped, with the Chinese Monkey King effortlessly protecting his master and himself. Worse, the fire attracted the attention of a bear demon residing nearby. In the ensuring chaos, the abbot’s own precious cassock collection was looted by the bear demon. His beautiful monastery was also devastated.

Inconsolable, the abbot then committed suicide by throwing himself against the wall.

According to commentaries, this straight-forward story is choked full of allegories, but for this post, I shall only speak of the most obvious one. That of greed being akin to a raging fire.

Once ignited, there is seldom any easy way to deal with such an inferno, yes? On top of which is the fact that greed almost inevitably attracts greater greed. (Within the story, represented by guest character the bear demon) Simplistic as this allegory might feel, don’t you agree it holds a lot of relevance for our modern world?

By this, I’m not talking about how so many of us regularly crave the latest handphone models, or covet expensive clothing, or yearn for luxurious homes.


I’m referring to obsessions that are quite beyond comprehension. For example, the collecting of obscenely expensive luxury handbags. When you consider it from the viewpoint of utility, just how many handbags would one woman need within one lifetime? Ten? Twenty? A Hundred? Apart from those secretly seething with jealousy, how many people would actually notice a lady carrying a different expensive handbag each day? Is there any real gain from owning such a pricey collection other than the joy of having?

On money, some older folks I know often ponder about the determination of some wealthy people to amass more money, an obsession that occasionally results in the use of dubious or illegal means. These older folks then attempt to explain everything using the very Asian aspiration of “it’s for future family generations,” only to baffle themselves later on by the resulting questions of “just how much is enough” and “when do you stop.”

Going by the allegory in Journey to the West, though, I believe there’s actually a much simpler explanation. There’s no complicated reason behind why some wealthy people are so obsessed with multiplying fortunes. Neither are they forecasting future needs or are secretly in debt. Everything is but the inevitable outcome of the greed that has taken over. An inferno that burns away reason and caution and personality.

Much like the abbot in the story, who already owns a wondrous cassock of collections, they yearn for more. They will continue to yearn for more even when there is no longer any need for more. Their lives then become an endless quest to feed the raging inferno.

Feed the inferno. Till they themselves are completely consumed.

It’s almost lyrical, the sheer tragedy of it.

But coming back to the Chinese Monkey King, you know, dear Wukong himself contributed to the overall tragedy. Because he was the one who revealed Sanzang’s priceless cassock to the greedy abbot. Yeah, he did it in a fit of arrogance and annoyance.

Upon receiving the cassock, Tang Sanzang was instructed by Guanyin to only don the precious artefact when meeting gods and enlightened sages. However, annoyed by how the abbot flaunted his inferior cassock collection, Wukong ignored Guanyin’s instruction and revealed his master’s treasure.

In doing so, the Monkey King himself succumbed to another classic sin. That of pride. Though a separate sin in Western beliefs, is pride not frequently the beginning and the end of many acts of greed?

With reference to a certain ongoing political scandal in my geographical region, I believe this relationship helps to answer the questions of, “wah, why so many bags?” “Why so many boxes of cash” and “Alamak! Just how much jewellery you want to show off lah!”

How many luxurious accessories do you need to go with that hair-do?

There’s a double fire raging here, and both have long since gone out of control. The only questions left are how on Earth to minimise the destruction, and whether unpleasant bear demons have long since gathered on the horizon for extended looting.

Read my other essays. 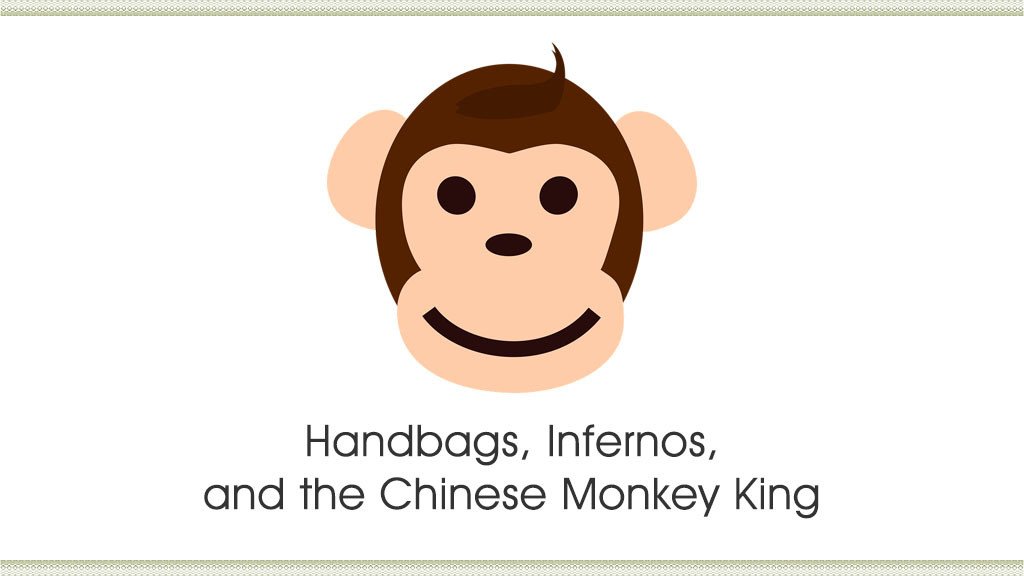