The world of Chinese Wuxia storytelling has important lessons for our modern world.

Today, I wish to rant about one of my many loves in life.

Wuxia. Or Chinese martial arts storytelling. If you’re unfamiliar with the genre, allow me to “conveniently” direct you to this write-up I did on the subject.

In short, Wuxia encompasses all the kung-fu, periodic sagas one regularly sees on East Asia television and movies. While popularity has somewhat declined in recent years for the written versions, Wuxia TV dramas continue to be HUGELY popular in China, Taiwan, and Hong Kong. I think not a month goes by without a new series released, or a classic story having another adaptation.

Oh wait, I’ve already highlighted that in a gaming post, didn’t I? Ahem. Let me get down to business then.

Of all the Wuxia novels I’ve read over the years, Jinyong’s The Smiling, Proud Wanderer (笑傲江湖) left the deepest impression on me. (For the sake of easy writing, I shall henceforth refer to this masterpiece as Swordsman, which was the title for the 90s movie adaptations of it) There are many reasons as to why Swordsman became my all-time favourite Wuxia story, first and foremost being the slew of incredible techniques presented in it. In this post, I’d like to shine the limelight on one of the deadliest techniques fought over in the story. This is the Pi Xie Jian Fa (辟邪剑法). In English, this roughly translates as the Evil Avoidance Swordplay or the Evil Warding Swordplay.

Anyhow, in the story, Pi Xie Jian Fa was the family heirloom of the Lin Clan. Founder Lin Yuantu established his fame in the pugilistic world through this legendary technique, and decades after his passing, his descendants continue to command respect throughout China.


Unfortunately, this recognition didn’t last and ultimately, the Lin family was massacred by rival clans eager to seize the sword technique for themselves. Blinded by revenge, Yuantu’s great-grandson, Pingzhi, then embarked on a grueling journey to recover the technique and master it. He succeeded, albeit at a huge cost to himself.

What cost was that? I need to backtrack a little here before explaining.

Like other swordplay techniques in Swordsman, Pi Xie Jian Fa consists of a number of refined strokes executed in a chain. What makes it so deadly is simply its speed of execution. In gaming or RPG terms, this would be a +100 agility sort of skill. So it was written, Lin Pingzhi became so quick with his slashes he could barely be seen moving. Even the main hero/protagonist of the story, Linghu Chong, himself a top swordsman, could barely see Lin Pingzhi’s attacks.

In the second half of the story, it was also revealed that Pi Xie Jian Fa is but a condensed extract of the Sunflower Compendium (葵花宝典), an exotic compilation of inner cultivation and alchemy methods, all (as implied) emphasising on speed. As the compendium was penned by an imperial eunuch, there are also various tutorials on the use of household items as weapons, one notable example being that of common sewing needles. (So perfect for sneak attacks and eyeball piercing) Finally, as the compendium was penned by an imperial eunuch, there’s a rather nasty prerequisite for mastering any skill from the Sunflower Compendium. One needs to hui jian zi gong (挥剑自宫), or “slash your sword and castrate yourself.” Presumably, this makes the Compendium only suitable for the gender that has something to slash.

Yes, Lin Pingzhi * sacrificed himself that way in order to enact vengeance on his enemies. Various characters who stole the technique from him did the same as well. By the way, nearly all were married so the tragedy extended far beyond.

The original keeper of the Sunflower Compendium himself also did likewise and for a few decades, he was feared throughout Wulin, though he/she was ultimately also killed. In summary, no one who mastered the Sunflower Compendium or the Evil Warding Swordplay enjoyed a happy ending in Swordsman. Lin Pingzhi himself is commonly regarded by Wuxia readers to be one of the most tragic characters ever written by Jinyong.

* It was ultimately revealed that Lin Yuantu didn’t have any actual blood descendants. His son was adopted.


The Most Scathing Satire in Wuxia Fiction

I first encountered the Swordsman story in 1984. Together with my folks, I watched the 80s Hong Kong television adaptation starring Chow Yun Fatt as Linghu Chong.

Ten years later, I read the novel. At the end of the novel was a lengthy commentary and it was through this commentary that I discovered Swordsman was actually Jinyong’s most political endeavour. In fact, the writer got so scathing with his opinions, Swordsman was briefly banned from publication in Hong Kong newspapers.

The various Wulin alliances in the story represented NATO and the Warsaw Pact, you see, and through their internal bickering, Jinyong lamented how such power alliances inevitably succumb to bitter in-fighting. Quite openly, he also bemoaned how such power alliances frequently fall victim to domination by the strongest member. In many cases, such domination further morphs into the primary purpose and reason for existence. Whatever the alliances were originally meant to counter is then all but forgotten.

And while the commentary didn’t specifically say so, it’s obvious that Pi Xie Jian Fa was an analogy for nuclear weapons. This evil warding, evil deterring weapon was capable of instilling great fear and thus craved by weaker individuals/nations. But invariably, ownership and mastery invite paranoia. Paranoia then becomes enmity. Enmity quickly leads to catastrophe.

Sounds familiar? I’m naturally highlighting this because of the ongoing nuclear crises in our world i.e. North Korea and Iran. Like Lin Pingzhi, the leaders of these countries have emasculated their lifeblood, their people, in the pursuit of nuclear arms.

The overt objectives of these countries is defence against other nuclear powers; specifically, the United States of America. Yet, it is precisely because of their nuclear ambitions that the USA and the world at large refuse to leave them alone.

Conversely, existing nuclear powers like the USA, Russia, and China would also forever be burdened by smaller states striving to be nuclear armed. America is currently the most targeted as it has the strongest arsenal. But who knows? When would it be China’s turn? Russia’s turn?

Hard fact. The real-world Pi Xie Jian Fa brought nothing but bitterness to nations, just like in the story. One could argue it served a deterrence effect for over half a century. But again, who knows? Maybe it’s all a build-up to the most disastrous confrontation in human history.

Making this more tragic is the often ignored fact that nuclear powers or aspirants aren’t actually feared for their nuclear warheads. While H and A bombs could still kill a few million people within minutes, these nations are dreaded for their more conventional capabilities.

The USA, for its unparalleled logistic and deployment capabilities. Russia, for its seemingly unlimited resources. North Korea, for its hundreds of conventional artillery pointing at Seoul.

If anything, the inclusion of nuclear weapons into the equation complicates everything and stall peaceful, diplomatic solutions every step of the way.

To refer to Swordsman one last time, every wielder of the Evil Warding Swordplay was defeated in embarrassing ways. Astonishing speed was described as being quite useless once you run out of techniques and strokes.

In our world, such humiliating defeat wouldn’t be laughable or poetic, it would be horrific. Quite honestly, I dread the day when such retribution is enacted in full. Selfish as it is to say, I pray I do not live to see this day come. 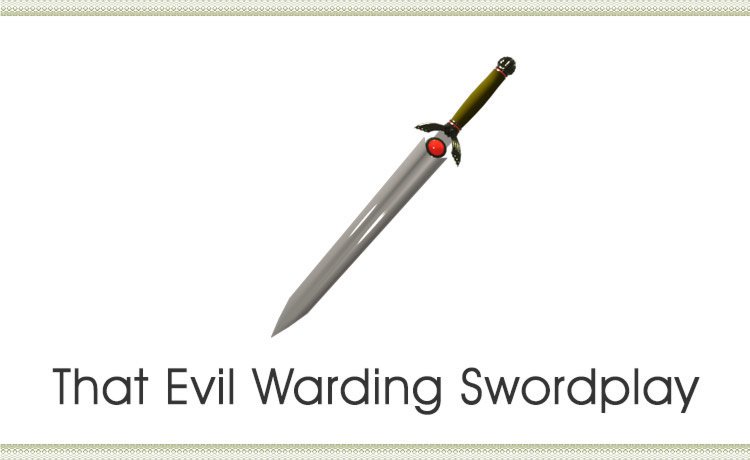 Article Name
That Evil Warding Swordplay
Description
What could the world of Chinese Wuxia fiction teach us about modern politics? Plenty of wisdom, especially regarding nuclear weapons.
Author
The Scribbling Geek