Singapore’s foremost tourist landmark is a casino. Yet, a student is punished with school caning on the thighs for bringing poker cards to school.

I chanced upon this piece of news earlier in the evening. A controversy involving a school caning at Horizon Primary School.

The picture made me cringed. What was in the write-up then made me frowned in disbelief.

I have a lot to say. A LOT. This stems from me having my fair share of questionable teachers and school administrators during my school days, which in turn permanently coloured my opinions of Singaporean schools (and the Singaporean civil service) for life.

I ought to add, though, one of my teachers ironically became my closest friend. This then evolved into something I chew on every now and then. A paradox I use to moderate myself too, whenever I am too irritated by Singapore school scandals.

What I’m saying is, the following is my opinion on this incident. My personal opinion as an ADULT who experienced the Singaporean system.

But before that, allow me to lay the perimeters. According to the news article, the boy was punished for bringing poker cards to school. I presume it was way more than that, because unless the boy is partially insane as I sometimes am, and thinks poker cards are cool weapons capable of summoning supernatural avatars, the kid probably gambled with them. The punishment should thus be for gambling, not for ownership, by my guess.

I’m assuming too that this is not his first offence. The lad probably has less than a glowing record in Horizon Primary School.

Right. Those are the perimeters. Here I go.

“One of our students was counselled …”

First and foremost, I believe in discipline. The Lord knows how many times I’ve clashed with my ex-staff over basic discipline issues, such as coming to work on time and doing diligently paperwork. In my opinion, the world would be a far more pleasant place if everybody just practices a bit more discipline. To begin with, lesser supervision and second-guessing would be necessary. There is assurance of what is and what will happen.

Having said that, there is no “discipline” when the methods used to encourage it are way out of proportion, or have no correspondence with the larger world around us. There is certainly no discipline when meaningless euphemisms are used to justify such methods.

According to the statement given to the press by the Horizon Primary School, the boy was “counselled.” Counselled? Seriously? Take a look at the link above, if you haven’t. The boy was brutalised, to say the least. On top of which ever-helpful netizens have pointed out that school caning is not permitted on the thighs. I hardly think the vice-principal had a slip of hand while enforcing that ONE stroke. If he did it knowingly, then it seems, SEEMS, he has a discipline issue himself.

A severe self-discipline issue. Which going by the man’s own system, warrants some good ol’ school caning.

There’s also the nature of the boy’s transgression. His sin, so to speak. So he brought poker cards to school. As I wrote earlier, he likely gambled with them and had previously been warned for similar offences.

Whatever the expanded truth, the reality is that the boy committed a non-violent transgression. To be physically lashed for this? And then to hide the reality of the punishment under the euphemism of “counsel?”

Again, seriously? I wonder whether the school and that vice principal realise a lot of the world’s ongoing conflicts stem from punishments not befitting crimes.

A situation that is further made confounding by the fact that poker cards aren’t exactly contraband in Singapore. (Legally, chewing gum is more heinous) While the Singapore government would never be caught saying it, does Singapore not glorify and celebrate gambling i.e. the main thing poker cards are made for?

We host our National Day Parades in full view of one casino. BMT recruits celebrate their “graduations” by throwing caps with this Singapore landmark as backdrop.

Gosh, how many times has national television featured that casino when in need of a glamourous shot representing Singapore! Calling it an “integrated” resort doesn’t make less of a casino too, by the way. If anything, it’s akin to that ridiculous “counselled” euphemism. An act of calling a spade a diamond, forgive the pun.

How baffling it thus is that a kid is punished with school caning on the thighs for bringing poker cards to school, while the rest of the country swoon over a palace where poker cards are specifically produced for.

Doesn’t make sense, does it, even if the kid had been explicitly warned not to. Call me stupid, but I do not see any coherence here. I simply don’t.

What Apologists Would Say About The Horizon Primary School Caning Incident


Naturally, I’m aware of what defenders of the school, or that vice-principal, would say. There’s a time and place for everything. Gambling and games of chance, as my secondary school used to call such games, are for adults. Blah and blah.

I agree. Personally, I dislike casinos too. To share, I have never stepped into any of the two in Singapore.

But let’s face it. Legal age is nothing more than the easiest, the most convenient way for the law to regulate whatever it cannot do away with. An uglier way of putting it is that it’s the point at which the law can, with a huge sigh of relief, start ignoring some of the nonsense people are doing. The Earth passing the same point in its orbit a certain number of times doesn’t necessarily make a person smarter or wiser or more responsible. It also certainly doesn’t make what is a cane-able offence magically correct overnight.

Which is a difficult thing to appreciate. I’m not even sure whether I phrased it properly in the above para. What I do know is, caning a student that way for poker cards is not going to help anyone understand. Not in a country still earning revenue from poker cards. At the end of the day, I suspect the most bewildered one here would be the boy himself. In the worst scenario, he might even end up despising the hypocrisy of it, and loathe Singaporean society forever.

I hope, I really hope, the Ministry of Education would investigate this incident thoroughly. Please don’t leave it hanging on a string of lame excuses. Lame corporate-speak.

I also hope Singaporean teachers do not rush to justify the school caning with stories and tales of how terrible children are nowadays. For those who have not taught this boy, doing so is akin to inflicting one’s own career frustrations onto a stranger, which IMO is the real cane-able offence.

As for those who have taught the boy, well, it doesn’t explain why once of age, our casinos would be clamouring for his patronage, not charging after him with rattan rods.

From a wider perspective, such incidences do not help anyone learn or understand the values of this small country. In many ways, I think it actually festers vehemence and vengeance in future generations. Hatred, which would come back to bite everyone. And not in the form of a rattan cane. 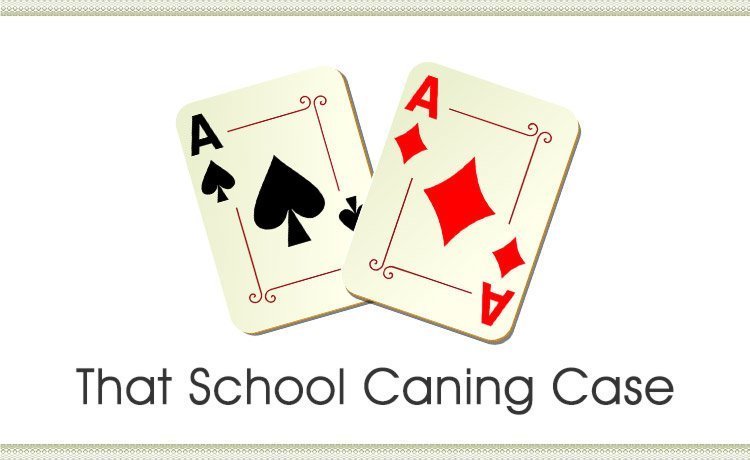