Sega’s Ryu ga Gotoku Series, also known as the Yakuza series, is beloved for its immersive gangland adventure gameplay. But do you know it’s also a splendid introduction to Japanese nightlife?

1. Japanese Nightlife Is About the Lights …

Like Mount Fuji and Shinto Shrines, dazzling neon/LED lit Japanese cities is an integral part of the Japanese travel experience. Even if you’re not into anything else mentioned on this list, strolling the streets of a Japanese city after it lights up is still an unforgettable and enchanting experience.

Whether it’s a kaiseki feast at a renowned restaurant or a simple oden snack at a yatai, food is an inseparable part of Japanese nightlife. At the same time, it’s also a privileged peep into Japanese culture and mentality. The cuisine is often said to be an expression of what Japanese people hold dearest to their hearts.

People watching is fascinating no matter where. In Japan, this is doubly so with the country being one of the foremost bridges between the East and West. If you know where to head to, you could easily enjoy of quality entertainment at practically no cost.

Many F&B establishments in land-precious Japanese cities are shoeboxes capable of sitting no more than four or five customers. For these izakayas, snack-bars, etc, a main attraction is the hospitality of the manager.

Referred to as masuta (master) or mama, these managers double as chef and bartender, while also conversing with customers and (sometimes) providing a sympathetic ear to life’s challenges. Admittedly, such establishments might be hard for foreigners to penetrate; they require one to at least speak basic Japanese. That said, they are undoubtedly one of the cornerstones of Japanese nightlife. A prime example too of the importance of oshaberi i.e. conversation in Japanese after-dark entertainment.

To continue on the above, those seeking more luxurious and intimate companionship could head to one of Japan’s many host or hostess clubs. Note that when I say intimate, I don’t mean, you know, sex. Many hosts and hostesses provide conversational companionship only, intermixed with straight-forward entertainment like karaoke singing and drinking games. For the lonely and tired, this could actually be more enticing than games of the flesh.

A word of warning about host and hostess clubs. It is well-known that some Yakuza-managed clubs lure customers into spending exorbitant sums of money, thereafter demanding payment in ways best left unmentioned. If you wish to head to any, be sure to inquire about your destination beforehand. Better still, go with a local veteran of the scene. Like anywhere else in the world, caution must be exercised when paying for such companionship.

6. The Past Meeting the Present …

One of the most fascinating aspect of Japan is how easily the traditional blends with the modern, a prime example being how traditional games like mah-jong and shogi are today staples in Japanese nightlife.

Establishments providing such games, usually smoky and crowded, could be found in all large Japanese city, and needless to say, you are welcomed to play as long as you have a working knowledge of the games. Should you do so, or if you have a Japanese friend willing to chaperon you, a visit to any of these places could easily be the most memorable part of your stay in Japan. Know that simply by stepping in, you have penetrated the inner depths of Japanese local culture.

Is karaoke a must-try when in Japan? I’d say yes, and I do so because the business of karaoke is refined to an art form in its birth country.

Terrified of embarrassing yourself before strangers? No problem. Just head to a karaoke box designed for solo artists.

Keen to serenade only your beloved? With no one else around? No problem too. You could spend the whole night doing so in a high-end love hotel providing karaoke as an amenity.

The short of it, this popular Japanese entertainment is truly accessible and can easily be enjoyed by anyone willing to give it a go. This includes even younger enthusiasts as today, there are many establishments catering specifically to students. These teenage haunts commonly serving all sorts of kawaii snacks to delight the young too.

Baseball is the most popular sport in Japan. If you’re into it, lucky you. Not only is baseball-related paraphilia easily found in any city, you could also have a go at batting during the oddest hours of the evening.

The Shinjuku Battling Centre, located in the heart of Tokyo’s Kabukicho district, is open until 4 am each day. Many other centres also have hours that stretch beyond midnight. Hereby, allow me to highlight that Shinjuku Batting Centre was the direct inspiration for the Yoshida Batting Centre in the Ryu ga Gotoku series. Visit its website, and you’ll see the version in the games is practically a mirror of the actual place.

While mobile gaming has taken a large chunk of the video game market in recent years, arcades still have a heavy presence in Japan. Many are also spread over multiple floors, with higher levels typically devoted to more “matured” entertainment such as fruit machines.

Ubiquitous to all would be also be purikura machines, as well as flashily decorated UFO catchers. On the latter, a UFO catcher is, of course, one of those devious inventions that could hook anyone for hours. This simple game is well capable of inducing rage or ecstasy, depending on the sort of person you are.

10. Japanese Nightlife is NOT about making a scene in public …

Whatever you might have read or heard about Japan’s after-dark entertainment, note this. Order is prized above everything else in Japan, even in party districts like Kabukicho. Drunken stupors are tolerated, but barely. The outrageously dressed also tend to congregate in certain areas only.

In summary, Japan welcomes anyone to have a great time in it after dark but only if you conduct yourself decently. Needless to say, you should also respect Japan’s many cultural systems. Its various social taboos too.

All screenshots belong to Sega.
If you prefer a different way to experience Japan, please read my retro famicom games post and Yakuza Ishin post! 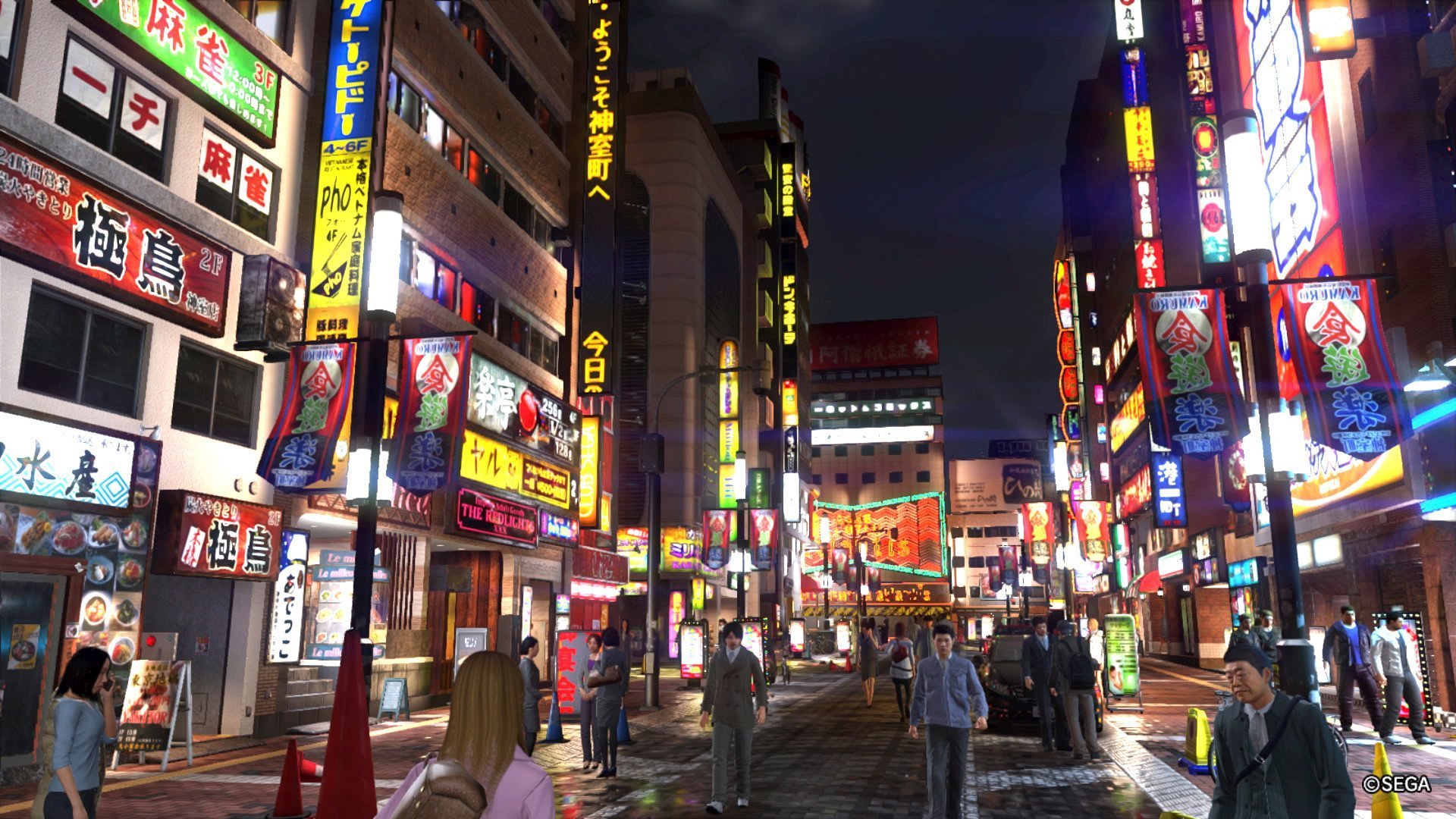 9 Healing Gods and Goddesses from Mythology and Religion