The Scribbling Geek > Essays > The Purpose Of Education

The Purpose Of Education

Scribbling GeekJuly 7, 2016No commentAnimeSingaporeThoughts
Assassination Classroom, or Ansatsu Kyoshitsu, examines the purpose of education in an over-the-top, humorous way.

Ahem. Excuse me. Needed to get that out of the system. I’ve been gorging on Assassination Classroom, you see. After hearing about it for a year, I finally got down to watching the animated series. I got hooked pretty quickly, especially by Fukuyama Jun’s fantastic voiceover for the title character. For a few nights, I went to bed giggling about Koro Sensei‘s out of the world antics. When I dreamt, it was also about tentacles. Nuru-nuru, slitheryyyyyyyy, yellow tentacles.

Now, like many anime series nowadays, including those for younger audiences, Assassination Classroom wasn’t all comic fun and banter. Skilfully weaved into the main story were several sombre themes. For example, the compulsion of some parents to fulfill their failed dreams through their children. Another major theme explored was the purpose of education. This took place within an extended story arc detailing the conflict between Koro Sensei and the principle of his school. Their viewpoints and approaches to education being polar opposites, the two contested each other’s beliefs via the sports and academic competitions of their students.

For Koro Sensei, who’s an alien-ish, giggly, octopus-like creature, education is all about bringing out the best in each child. To assist each student in understanding, realising and embracing individual strength and weaknesses. To also, in the process, provide each student with the best years of his or her life. Because the students then gain a clear understanding of the areas they excel or suck at, their inclination to cooperate with others is correspondingly heightened. This fosters an ideal situation in which seemingly insurmountable tasks are effortlessly handled. Work division becomes easy and natural. Competition remains, but in a friendly way. It becomes a matter of who would perform better at the respective tasks assigned.

For the principle, Asano, the purpose of education is to prepare children for the harsh world that awaits in adulthood. He does this with what he calls the “E Class” system. The weakest students of the school are grouped together and forced to study in a derelict building away from the main school complex. The rest of the school is also regularly encouraged to scorn and mock those in the E Class. Asano’s overall intention is to cultivate fear. Fear of being left behind because of poor grades, and thus made into one of the “despised.” It’s a cruel method, undoubtedly inhumane. But it is also clearly stated that his method works, with the majority of his students achieving remarkable grades. In the anime itself, Asano is also recognised as an accomplished educator.

The Purpose of Education in Real Life, and in Singapore

Asano, the vile principal, has wicked red eyes in the anime. But I wouldn’t be too quick to dismiss him as a villain. At the same time, I wouldn’t immediately celebrate Koro Sensei’s seemingly benevolent approach too. Both were portrayed as extremes in the anime. In reality, neither is completely right or wrong.

Koro Sensei’s approach is the humane, idealistic interpretation of the purpose of education. It’s what most people would want education to be. Problem is, this approach only works when sustained over long periods of time and done on a national (if not, global) level. Moreover, it does not answer the question of, what about students who are simply mundane? With no crippling weaknesses or impressive strengths? Where do they fit in the larger scheme of things? In Assassination Classroom, these characters were glossed over.

As the embodiment of practicality, Asano’s way goes beyond equipping a student with academic knowledge. He also imparts the mentality to survive in the adult, cutthroat world. If you think of education as being a holistic preparation of a child for adulthood, then wouldn’t his method makes sense? The adult world is ugly. It has always been ugly. Shouldn’t a teacher’s primary duty thus be to toughen students before they are thrown into this cesspit?

In Assassination Classroom, it is ultimately revealed that Asano once embraced Koro Sensei’s approach. Tragically, one of his students committed suicide after suffering excessive bullying. This brought about a complete change in Asano, who blamed himself for not teaching his kids the mental skills to survive against antagonism. Of course, the system he eventually devised involved the sacrifice of the “E Class.” But the sacrifice of a minority for the majority has always been the way society functioned. We might cringe to admit it. But we can’t deny the existence of this system. Nor realistically remove it.

In Singapore, there is currently a lot of talk about more humane approaches to education. A less emphasis on grades and school rankings, and more efforts to bring out the best in each child. (Very Koro Sensei, eh?) Without apology, I read news about such initiatives with buckets of scepticism. Would we really change, when our previous system was with us for so long, and had largely worked?

You see, the “E Class” existed was in Singapore for decades. In the 80s, it was literally nationalised with the Extended and Monolingual systems for primary schools, and the Express/Normal streaming system for Secondary Schools.* Through the years, the typical admonishment by parents when shown bad grades was, “You better study harder ah! Wait you kena Primary 8/Normal stream then you know.” Kena, being Singlish for “to be inflicted.” And you know what, arguably this worked. Singapore rose spectacularly and met the new millennium as one of the foremost cities of the world. Yes, some people suffered for life because they needed to spend additional years in primary or secondary school. This wastage of time left at least a psychological effect on many of them. But as a nation, Singapore thrived. At least economically. If not humanely.

In the face of such evidence, what then should be the purpose of education? One based on ideals? Or the real world?

Should education be a celebration of  diversity? Or a preparation for the grim challenges of the world?

For a tiny city like Singapore, I doubt we could ever live independent of the challenges from the world at large. If our people can’t compete, skills-wise or mentally, we’d go down faster than we did in WWII. What then hould we do in the face of this reality?

Tough questions. Horrible ones. And the saddest fact, we wouldn’t have a slithery octopus traveling at Mach 20 speed to enlighten us.

* The Extended/Monolingual/Normal streaming systems, in short, forced weaker students to spend additional years in school. Those under the Extended and Monolingual systems spent eight years in primary school, instead of six. Those in the Normal stream spent five years in secondary school, compared to four for those in the “Express” stream. 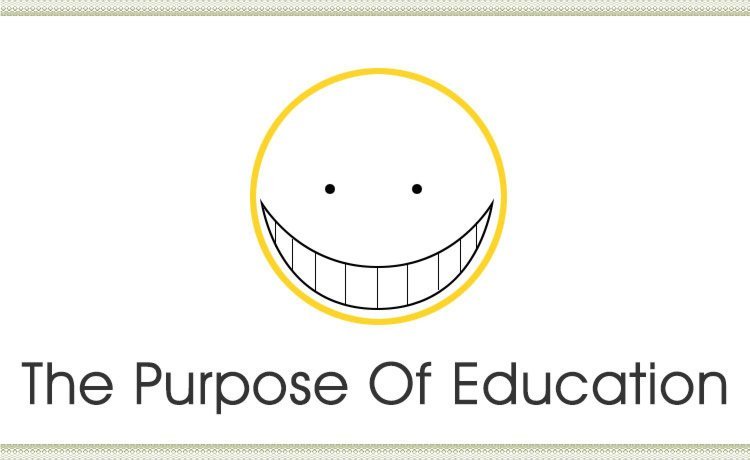 Article Name
The Purpose of Education
Description
Assassination Classroom, or Ansatsu Kyoshitsu in Japanese, examines the purpose of education in an over-the-top, humorous way.
Author
The Scribbling Geek
Tags:AnimeSingaporeThoughts
tweet
Share on FacebookShare on Twitter