Boom: An Essay On Murder

How about this? A holiday you dreamt about for months. One you would not return home from. Because you fell to murder.

You’ve been dreaming about this break for months. You’ve been planning it for years! Each day, while hustling in the oh-so-packed bus to work, you struggle with your smartphone, scouring the Net for information to refine your trip. You believe you got everything right. Well, nearly. Certain things are bound to go wrong, but isn’t that only to be expected? Isn’t that part of the joy of traveling? Whatever happens, you are certain you would still enjoy your holiday. You are determined to! You so deserve this holiday. You have worked so hard for it. Nothing is going to stop you from having the best time of your life.

It … doesn’t begin well. On departure day, you wake up sore and drowsy. Despite going to bed hours earlier than usual, you barely managed to sleep. Rats, anticipation works both ways, doesn’t it? Never mind. Nothing an expresso wouldn’t solve. Gathering your bags, you lock up your apartment and you head for the airport. Things begin to pick up the moment you reach. Maybe it’s the sight of all the other travellers rushing about. Maybe it’s that sensation of  movement, of … everybody going somewhere! Resisting the urge to whistle, you determine your check-in counter and you breeze towards it. Along the way, you pass by a group of senior travellers and despite not having any reason to, you smile at them. You smile at faces you normally would not even register on the streets. Some of them smile back. A very wrinkled, crinkled one waves a little. A strange warmth fills you. It’s a peculiar warmth, but also one that is pleasant and human.

And then it happens.

By the time your senses return, you’re on the floor. The world is fractured around you. All you hear is a leaden hum and then you realise the dampness your face is pressed against is the blood seeping from your destroyed eardrums. You continue not to understand what has happened till you see the smoke. Smoke that your eyes detect, but somehow your nose doesn’t smell. Soon after, you start noticing the other victims too. The remaining pieces of them, that is. That group of seniors seems to have taken the worst of the blast, for there’s not very much left of them. In fact, their burnt clothing is easier for your weeping eyes to make out. For example, the crimson scarf the very wrinkled, crinkled one was wearing. Let’s see, there are, three, four, maybe five pieces … left of her? One piece is rather near you. Just an inch or so away. You could reach for it, touch it, that is, if your arm could move.

You start to die. You don’t go quickly, you go piece by piece. Before losing consciousness, you start to pray. You pray that you would die completely and not have to spend the rest of your life in this broken, wretched form. For the first time in your life, you also beg not to be able to return home. Not to ever see your apartment, your friends, your family, your cat, ever again. You just want to die. There and then, if only for the pain to end. Mercifully, as your boss has granted you leave, you are given your wish. After a few minutes of eternity, you become another corpse in a destroyed edifice. The next day, you are part of a number screaming from the front of all newspapers, your name, respectively, thereafter not mentioned even once. A year later, a government official etches your name onto a plaque beside the airport, that to be the final reminder of your murder. Meanwhile, someone else somewhere plans another terrorist bombing. More deaths are soon to come. More deaths are already hungered for.

In the midst of all the arguments about what-is and what-is-not, let’s never forget terrorism is murder. Murder of innocents.

Only by remembering, do we have any chance of stopping terrorism. 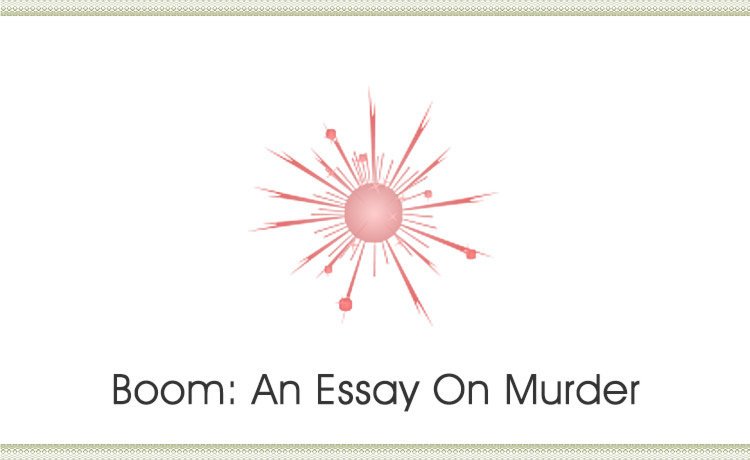 Article Name
Boom: An Essay On Murder
Description
How about this? A holiday you've been dreaming about for months, if not years. One that you would never get to return home from. Because you fell to murder.
Author
The Scribbling Geek