F didn’t spare the scorn. “Why you go buy this?! You so cheapo go buy imitation goods one meh?”

“Wah lao. You know how much a real one cost ‘anot? That kind of price of course is imitation one lah!”

And … F was right. I do kinda know how much a real one was; I did do my homework before placing the online order. Just that, I didn’t exactly consider my purchase a knock-off. I thought of it more as a budget purchase. This, by the way, is in line with what the sales page highlighted. It emphasised CHEAP(!) Cheap, affordable, and limited stock only (first come first served (!) 50 units only!!(!)) To put it in another way, it was no con job or rash purchase. There was a clear understanding between me and the seller.

“It’s actually quite okay,” I mumbled. “Yah, it feels a bit wobbly here and there. The wheels are kinda … you know, too. But it’s comfortable! And it’s at least better than my previous one!”

“It’s not going to last lah! It’d break down soon and then you have to go and buy another one. Serve you right!”

Now that, I could debate with F for hours. I’ve bought imitation goods of this nature before, and nope, they don’t break down overnight. They don’t last for an eternity either, but then, who in the right mind would expect them to? Besides, with their kind of pricing, I could painlessly replace any defective ones immediately. I could do two, three, four replacements, and the total amount spent would still be lesser than that needed for an “original” product.

F read it from my face.

“I know what you’re going to say,” he eyed me balefully. “You’d just buy a new one when this goes. It’s not about that, Bro. It’s about quality. About supporting originality and CREATIVITY. You mean you like people to steal your graphic design and sell it at super cheap price meh?”

“Actually, if anyone wants to do that, go ahead. I’m already making peanuts with what I’m charging. If someone can do it at even lower prices, and still make money, go ahead. Be my guest.”

“That’s not the point lah!”

Then what is? A difference in quality? Durability? Consumer’s pride? The truth was, while I wanted a nice gaming chair, I didn’t have a need for the top-end version. The differences in quality, comfort or aesthetics, however real, were not important enough to me to justify spending three or four times more. There was also the question of what I would exactly be paying extra for. Is it truly better satisfaction, or just egoistic pride? The latter being F swooning all over it, instead of heaping scorn on me. Him yakking and praising me for my discerning tastes, instead of scowling.

At the same time, I’m also reminded of the practices of some of my European business friends. Like the stately monuments in their countries, they are unfazed by competitors offering cheap substitutes. In fact, one of them went as far as to declare he’s thrilled whenever a customer switches to an imitation. (The exception being when the design is patented, of course) His logic. If the other party is as lacking as one would expect, then the customer would inevitably be traumatised. Upon returning, it is extremely unlikely for the customer to ever switch again. On the other hand, if the competitor is able to retain the customer, well, it’s a wakeup call, mate. Time to review yourself. Time to see whether you are pricing wrongly, or manufacturing too expensively.

“You know, the first DSLR I bought was a second-hand D40,” I said to F. “Down the road, after I’m certain I do want to get serious about photography, I started upgrading. Now I buy the upper-middle range. The pro-amateur models, as they are called.”

“What the fish you saying?”

“I’m saying, I think if companies are concerned about imitation goods, they could do one of two things. Provide different ranges of products. From the lower end to the upper. Or focus on one stratum. Devote yourself to your preferred audience and don’t bother about the rest.”

He was aghast. “What? So Gucci should have fifty dollar handbags? So that you can move up and down the ladder?”

“That’s not what I meant lah! But … that would be an interesting idea.”

“Bro, you know what? I think bottom line, you’re just a cheapo. Damn shameless cheapo giving one excuse after another.”

This post about “cheapo” chairs  is written in Singlish, the colloquial form of English spoken by Singaporeans. 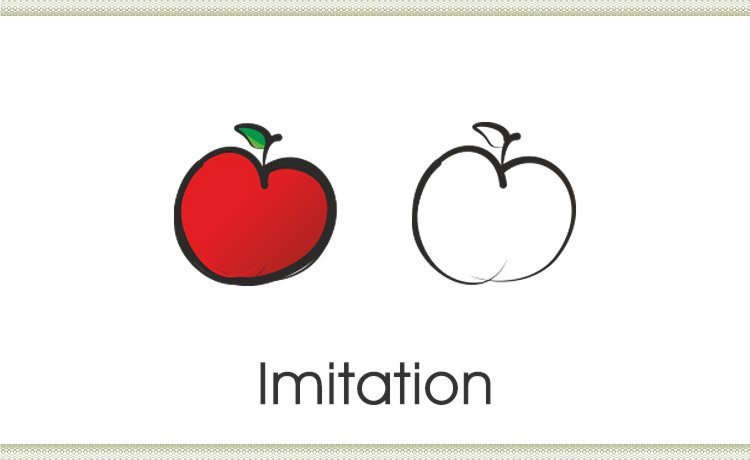 Article Name
Imitation (Singlish Post)
Description
Why do people buy imitation goods? Because knock-offs are cheaper? Because originals are too expensive? Or because needs are actually cheap?
Author
The Scribbling Geek
Tags:SinglishThoughts
tweet
Share on FacebookShare on Twitter